WTF Is This Crazy Food?

In recent years there has been some crazy food and drinks popping up for sale around the world. From rainbow grilled cheese to freaky shakes and deconstructed coffee. While some of them make you think yum and others ew, there are always those that make you think, WTF is going on? Here’s our hit list.

Skittles said it first with their slogan “taste the rainbow” but this latest crazy food trend is taking that concept to a whole new level. From colourful coffee art to funfetti-filled bagels and grilled cheese, you can get almost anything with rainbow colours spread through them. It’s like the Care Bears took a dump in between two pieces of bread and voila! Here’s your multicoloured, Instagrammable cheese toastie.

They look like glass, and some of them don’t even look real but they are. Created by Russian baker Olga Noskova, these marble cake creations are building a frenzy all over the internet. And while she does keep her recipe a secret, many have been trying to recreate the fun. WTF makes it so smooth? We just want to stroke it.

We don’t know where they began but they are now everywhere. Freakshakes are like keeping up with Joneses. Everyone who makes these is out to make their’s bigger and better than the next persons.. From Nutella ball shakes to fairy floss and brownies, you can now get almost any kind of dessert in one of these sweet, sweet (super sugary) jars. These ones are from Canberra’s famous cafe Patissez.

Now this is a crazy food combo! Found in Melbourne’s Melba Restaurant at The Langham, these are a step up from the infamous doughnut cone. The name says it all – naan bread with M&M’s throughout wrapped into a cone shape to hold your favourite scoop of ice cream. Hold the butter chicken please we’re skipping straight to dessert.

Normally when you go to a cafe the whole point of spending $4 on a coffee is so they can make it for you. But at hipster cafe The Kitchen at Weylandts in Melbourne they’re no serving a deconstructed coffee. Beakers of milk, water, and two shots of espresso come out on a wooden board for your to pour yourself. Now this is really WTF!

Found at Matcha Mylkbar in Melbourne, this is what vegan eggs look like. The bright yellow ‘yolk’ is made of sweet potato, coconut milk and linseed protein, while the ‘whites’ are made from agar agar coloured with coconut and almond milk. It’s a pretty strange sensation biting into something that claims to be an egg that tastes nothing like a damn egg. This is some crazy food we don’t even know how to explain. 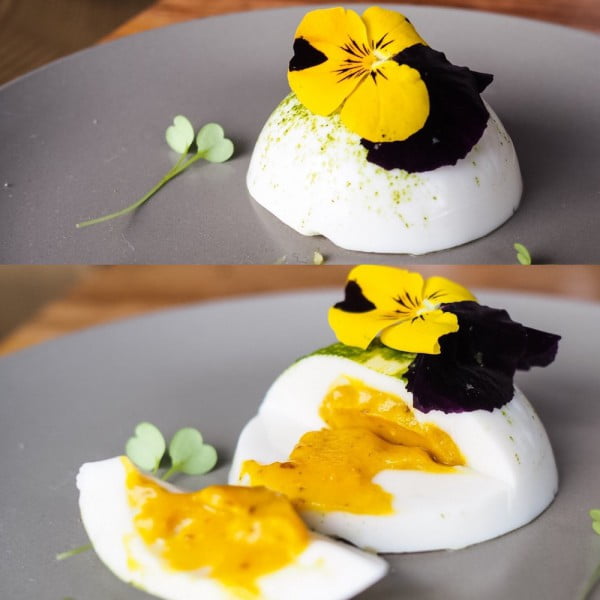 Found only in Soho, New York, they’re officially kicking off summer with Tahitian vanilla bean ice cream covered in chocolate wafer crisps on the inside, honey marshmallow on the outside and torched to order. These are apparently going crazy over there, but they do look like crazy food to us!

For us Aussies, this is a little more ew than wtf but nonetheless wtf! The Vulgar Chef in Massachusetts, also known as Josh Elkin, has created fat upon fat upon fat. As they say, why have one when you can have three?!

We wonder what will be the next wtf food!

If you want to find more fun food close to home, check out Doux Amour Patisserie’s cute sweets or the weird Raindrop Cake!