Sydney cake queen and celebrity baker Katherine Sabbath reveals the secrets to crafting a devilish dessert to add a dark twist to your festive spread this Christmas.

With the festive season rolling around once again, we’ll soon be stocking up on all the essentials to put together the classic Christmas spread. From throwing fresh prawns onto the BBQ to crafting a berry-loaded pavlova, the typical Aussie Christmas is bright, fresh and fruity. But this season, we’ve found the perfect reason to try something new and create a devilish dark dessert.

For Katherine, this quirky recipe creates the ultimate unexpected festive treat as she explains, “I think we’ve all met a few people who deserve a lump of coal at Christmas. Finally, The Kraken has given me the perfect excuse to create this devilishly dark dessert.”

Want to nab one of these desserts for yourself? These blackened bites will be exclusively available via social media (the place where Katherine’s baking empire kicked off). To score your own Krake Christmas Coal baked by Katherine Sabbath, keep an eye out for the ’12 Days of Christmas’ social giveaway on the Kraken’s Facebook Page beginning on December 2nd 2019. Simply nominate a friend who has been not-so-nice this year to go into the draw to win your very own edible coal.

For those who want to try their hand at creating their own dark dessert this season, check out Katherine’s Kraken Christmas Coal recipe below! 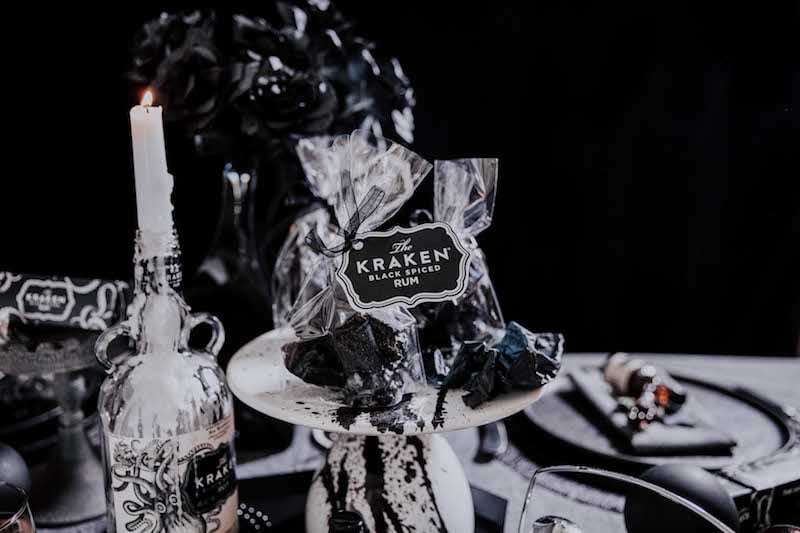 1. Line a slice tray or oven dish with aluminium foil and grease with cooking oil spray.

2. In a saucepan large enough to accommodate the mixture eventually growing to 4-5 times its original size, combine the sugar, salt, and corn syrup/glucose syrup. Once boiling, add The Kraken Black Spiced Rum, vanilla, and black food colouring (until a rich black colour is achieved). Cook over medium-high heat until it reaches ‘hard crack’ consistency or on a candy thermometer 145ºC – 150ºC (this should take around 10 minutes).

3. Remove the pan from the heat and immediately stir in the cinnamon and bicarb soda. The mixture will bubble up significantly! Stir until just combined, being careful not to knock out the delicious airy texture of your honeycomb coal. Gently and carefully pour into prepared tray or dish.

4. Allow the honeycomb coal to cool completely before handling (at least 1 hour). Once cooled, use a rolling pin to smash into smaller chunks, and be sure to remove any remaining aluminum foil.

5. To decorate, melt the dark chocolate and coconut oil in a heatproof bowl, using either the microwave or double-boiler method. Stir until combined, and add black food colouring until the desired shade is achieved. Mix in crushed Oreo biscuits. Dip the honeycomb pieces into the melted chocolate and allow to set on non-stick baking paper. Top honeycomb coal with extra chunks of chocolate-covered Oreo pieces if needed.

6. Store in an airtight container in a cool, dry place for up to one week.

*Kraken Christmas Coal contains dairy and gluten and may contain traces of nuts and soy. Combine all ingredients in a punch bowl over large chunks of ice. Garnish the bowl with lemon wheels, berries, and edible flowers. Ladle into six glasses, being sure to include some of the garnishes in each serve.

Sponsored Love. This post is proudly brought to you in partnership with Kraken Black Spiced Rum. Thank you for supporting the partners that make Eat Drink Play possible.