Sashimi tacos are a thing and they’re awesome. We found them at Tokyo Laundry in Circular Quay.

We’re all familiar with fast-paced food sensations. Rainbow toasties, pasta tossed through a flaming parmesan wheel. Remember that dessert that looked like a blob of water? It’s relatively easy to create an ‘OMG’ food moment. What’s harder though is for a restaurant to extend itself beyond the one ‘show stopper’ dish. What does that rainbow toastie actually taste like? What does the rest of the menu look like? At Tokyo Laundry, you may be drawn in by the sashimi tacos. Rest assured though, you’ll come back for what else they have on offer. 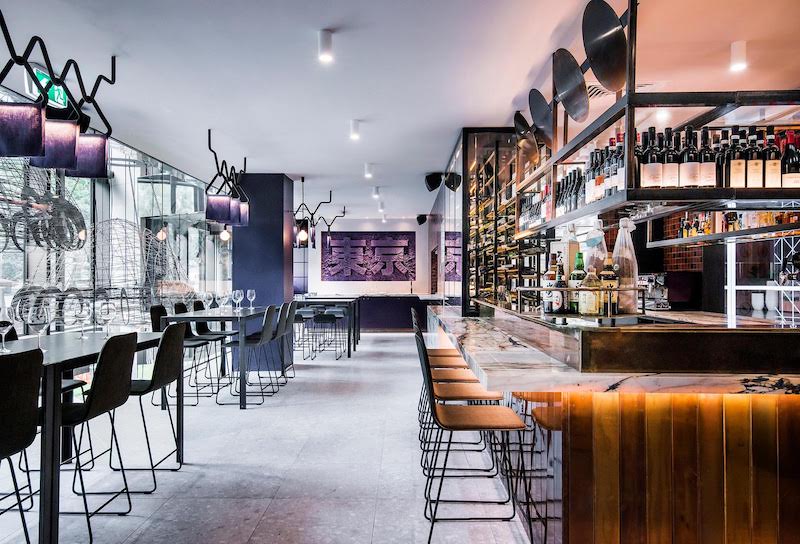 Tucked within one of the many folds of the Gateway complex at Circular Quay, you would be forgiven for walking past Tokyo Laundry. It is still fairly new, doors opened in April 2017. On a sunny Thursday afternoon it’s suitably bustling inside, the corporate crowd cottoning on quickly to the exquisite Japanese menu available.
Here, it’s all about providing a sophisticated take on the traditional Japanese Izakaya style of food. Head Chef Mulyadi Djunaedi does a mighty good job of it, his contemporary inspirations developed at Nobu (Melbourne), Sokyo (Sydney) and Toko (Dubai).

Old and new runs throughout not just the menu, but all other facets of the restaurant. Suspending violet Japanese drapes juxtapose sleek modern furnishings. A large open-style bar is laced with aged sake and Japanese whisky and younger Australian and European wines. 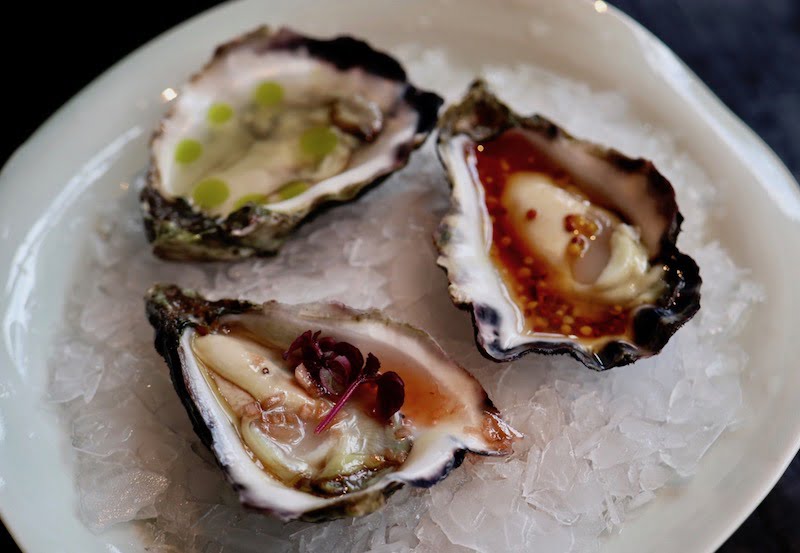 On the food menu, you’ll find starters such as plump Sydney rock oysters (6pc $23.80) drizzled with a wakame dressing and basil oil along with the usual suspects in a good Japanese restaurant – beef tataki ($17.80) and snapper and kingfish sashimi, brightened up by an arrangement of sweet and tangy sauces. 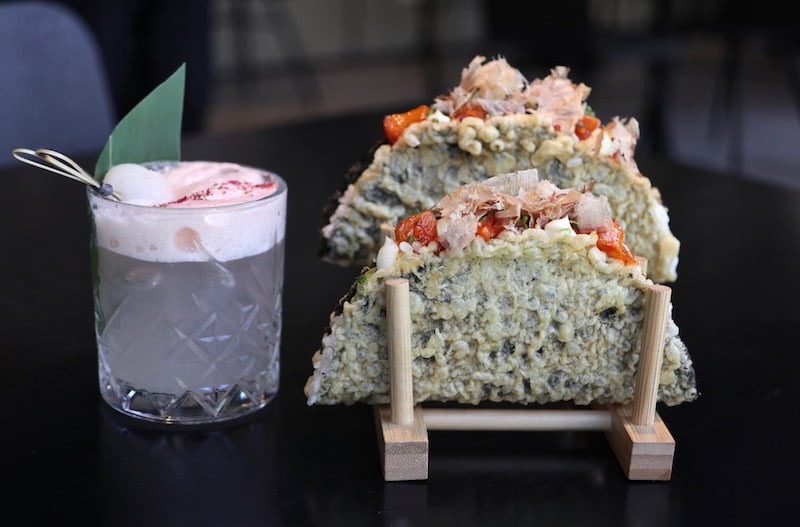 Sashimi Tacos? Now that’s not something you see on every Japanese menu. They resemble the shape of your classic Mexican hardshell taco, with various layers sitting snuggly between the vessel. This visual similarity is about the start and end of the taco that you and I are familiar with. At Tokyo Laundry, seaweed is tempura fried, giving the tacos a delightful crunch. A neutral base layer of sushi rice cleverly offsets the creamy avocado and delicate cubes of spiced sashimi. Generous dollops of Kewpie mayonnaise only amplifies the other flavours at work, a light scattering of bonito flakes representing the cherry on the cake.
What’s refreshing about these tacos is that they stay remarkably in tact with each mouthful. Sips of a cocktail or Asahi beer in between bites. Whilst you’ll agree that the tacos not only look amazing but also taste delicious, you’re strongly encouraged to move beyond this Instagrammable delight.

Noteworthy mains include the lamb cutlets (3pc $27.80). Perfectly cooked, the lamb cutlets are accompanied by a triptych of sauces, designed to work in well balanced unison. First you have the mugi miso, offering a salty kick to get the taste buds going. Next is a silky black eggplant puree, the subtle smokiness of the eggplant flesh carrying through. Finally, a light spreading of English mustard to inject some heat.
Keep room for other delicious dishes including the confit chicken ($18.20) served atop a generous pool of creamed corn. Teamed with flavours of leek and a green tea nori salt, you’ll find it hard to stop at just one serving, each element serving a prominent role on the plate.
With stomaches full to bursting, we didn’t dabble in other mains, but will certainly be back for the Black Cod ($36.80) served with saikyo miso, beurre noisette and house made pickle. Other enticing dishes include the pork belly (2pc $14.60) which comes with apple wasabi and sweet soy and a very indulgent Wagyu Scotch Fillet Steak MB+ 500g GF ($84) – designed for those special occasions.

Starting from December 14th, Tokyo Laundry will be offering a range of specials on their food menu. This includes $2 oysters from 5-7pm from the oyster bar, plus a lengthy 3-7pm happy hour giving you access to $6 beers and house wine.
Tokyo Laundry’s Seafood Platter, which would normally set you back $120 will also be on special for $88 until 31st January, providing the perfect excuse for a long leisurely lunch with friends during the summer months. 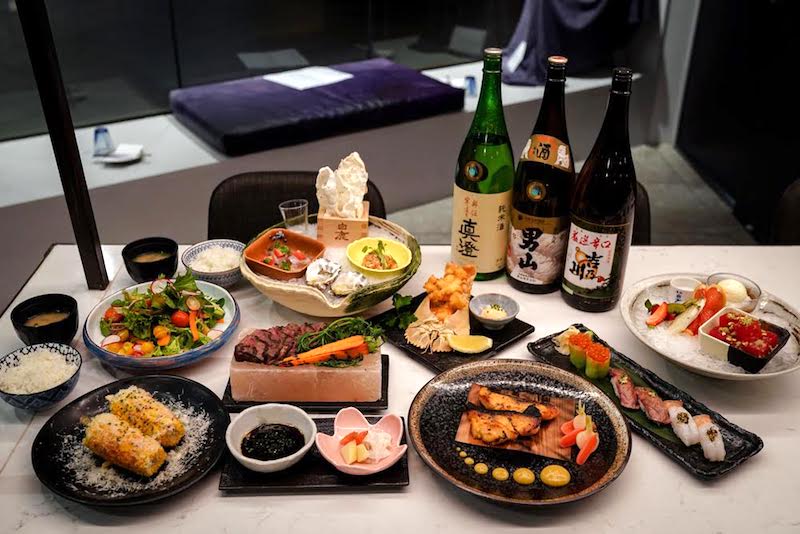 They also have a special set menu for dinner (see above) which includes Sydney rock oysters, snapper and salmon tartare. wagyu rump, Balmain bug tempura, assorted nigiri, their signature black cod dish plus salad, sweet corn and dessert. This set menu is usually $98pp but during December will cost $75pp. You need to book one day in advance and the promotion ends on 31st January. To book in phone 02 9251 3323.

To celebrate Tokyo Laundry, we’re giving away a $200 dining voucher. To enter, simply click on the Facebook link below. The winner will be drawn Thursday 21st December at 5pm. Good luck!

Sponsored Love: This post is proudly brought to you in partnership with Tokyo Laundry. Thank you for supporting the sponsors that make Eat Drink Play possible.