Over the last few months, Soup Group has been warming souls in Surry Hills every now and then on a sunny Sunday afternoon. The concept is simple: freshly prepared soup, made with locally-sourced ingredients and real stock, available for a $5 donation from a pop-up location in Surry Hills. Add some cool tunes, relaxed laughter and a “making the most of what little of the weekend we have left” vibe and you have  yourself a good day out. 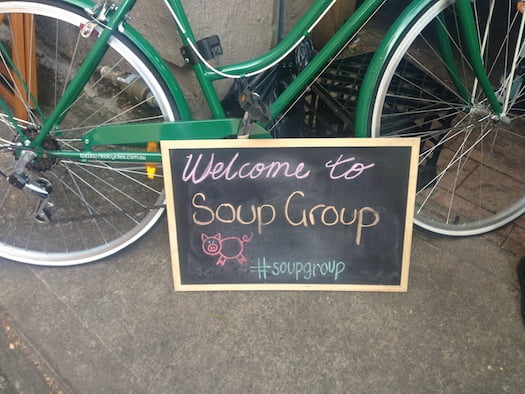 The most recent Soup Group was held on Sunday 29 September in a secluded street corner, where the “soup troops” served a flavour-packed Vietnamese Pho – a fitting option for the warmer weather. The operation was impressive, a huge 70 litre pot of fragrant homemade broth formed the base upon which rice noodles, beef ribs, thin cut rare sirloin steak, fresh chillies, red onion, been shoots, lemon wedges, coriander and mint combined as harmoniously as if ordered straight from a street vendor in the event’s quaint namesake Vietnamese town. And then you could add your condiment of choice, whether it be hoi-sin, sriracha or traditional spicy sauce (pow!) 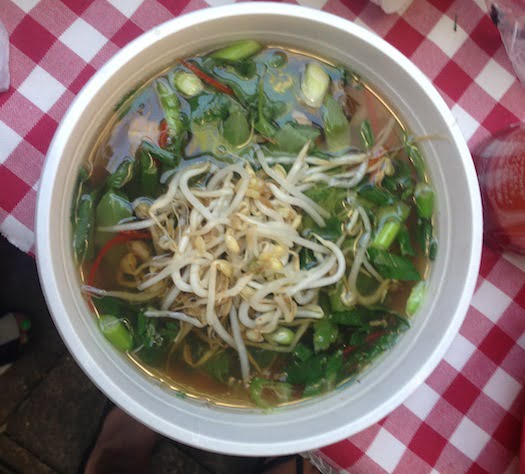 Maybe it was the live tunes of Sydney folk band The Falls playing in the background, or maybe it was simply the soup itself… whatever the case all 70 litres of it sold out! This continued the trend of the previous two Soup Groups ‘Leaky Spuds and Bacon Buds’ and ‘Winter Greens and Pig’s Feet’ at which a creamy potato and leek soup and a green veggies soup with pulled smoked ham’s hock were served with all kinds of salty and crunchy trimmings. And as if there was not enough to prepare already, vegetarian options have been available at each Soup Group too. 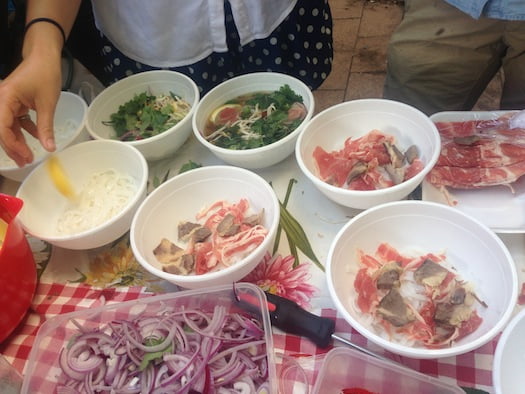 I noticed on Sunday that although the number of “soup groupies” has grown, many are still the same people that attended the original event. That has me thinking that no matter how good the soup is (and it is damn good), Soup Group is as much about people coming together to share stories of the weekend and discuss hopes for the week ahead as it is about the bowls in their hands. If you would like to join-in the next Soup Group, be sure to check out its Facebook page regularly for the next date, theme and location.