Bunker Down This Winter At Darlo Country Club

Put on your best tennis whites, take a walk up the polished entrance steps and transport yourself to Beverley Hills. Darlo Country Club is Sydney’s exclusive country club-inspired bar and restaurant. 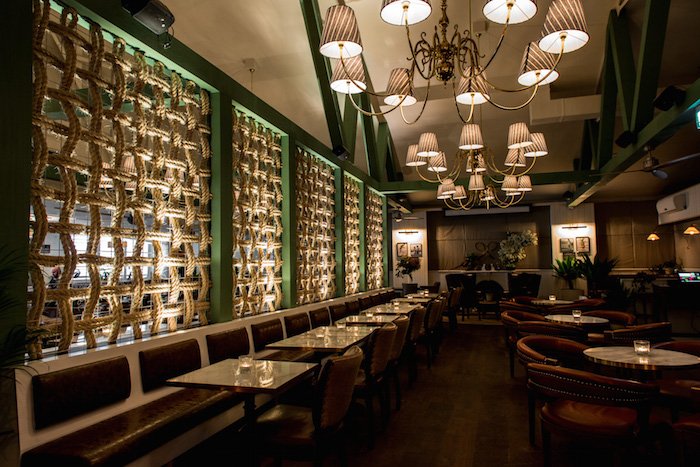 Eddie Levy and Michael Hwang of Lobo Plantation and The Island’s Adam Abrams and Julian Tobias opened the Darlo Country Club last year.After more than six months competing with Darlinghurst’s suite of trendy bars, the Darlo Country Club has gained quite a following. Recently, executive chef Peter Lew (you may know him from Barrio Chino) has re-designed the winter menu following an inspiring trip around the U.S.
The large dimensions of the space could feel bare, but the candlelit tables, wooden interior and leather seats exude warmth and intimacy. The sweeping bar is equally as grand. The cocktail list at the Darlo is extensive, offering classics like the Negroni or more unique options like the Hollywood Sour made with Ketel One vodka, White Chocolate Campari, lemon, vanilla and chocolate bitters. It tastes a bit like a chocolate jaffa.
The menu is a similar mix of the American country club inspired classics. There’s a Waldorf salad with crumbled blue cheese, a ‘DCC’ burger with truffle fries and a classic pan roasted sirloin. We opted to skip the heavy-sounding mains for a selection of the smaller dishes to share. If you’re a bigger group, we suggest you do the same. 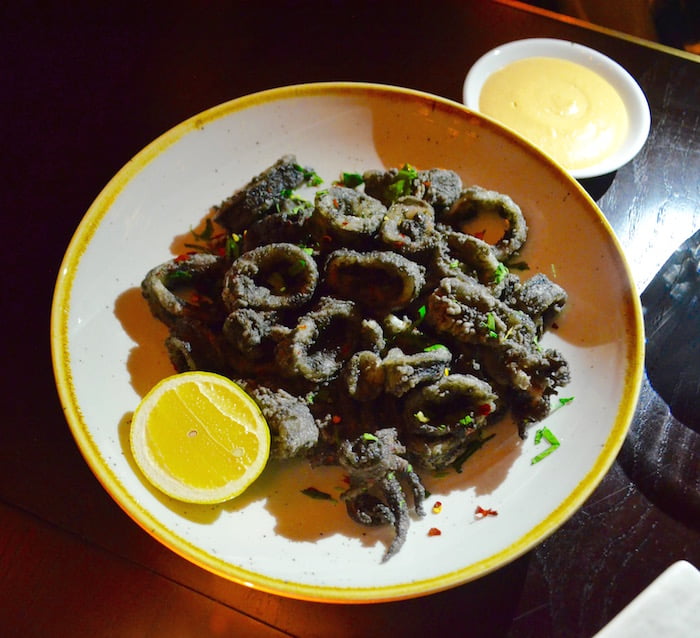 We began with the bluefin tuna poke with pickled ginger mayonnaise and radish on nori crackers ($16). Poke is traditionally served in Hawaii as a raw fish salad and it’s light, fresh flavours were a great way to start the marathon of dishes to come. 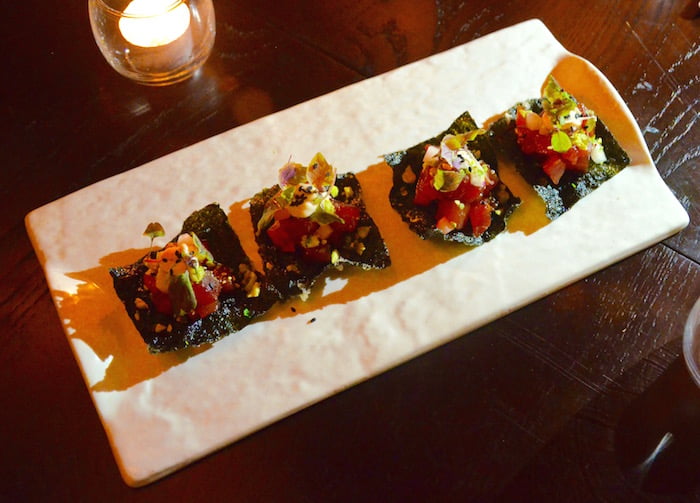 Although the Poke was a hard act to follow, the ‘squid on squid’ (squid ink battered squid) was another winner ($16/24). It’s inky black colour made for an interesting take on the classic calamari dish. 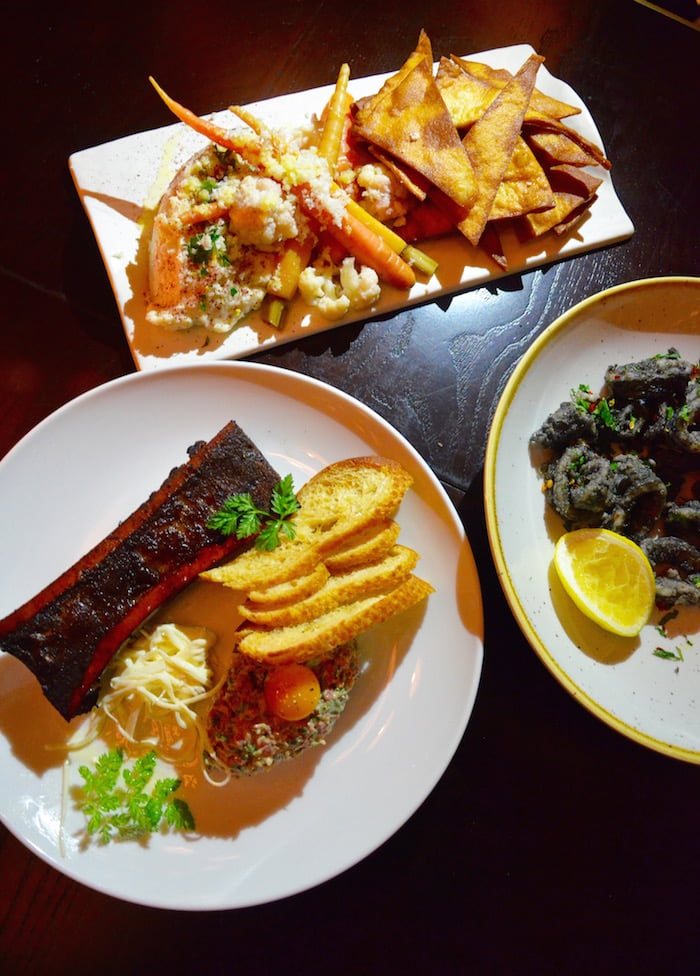 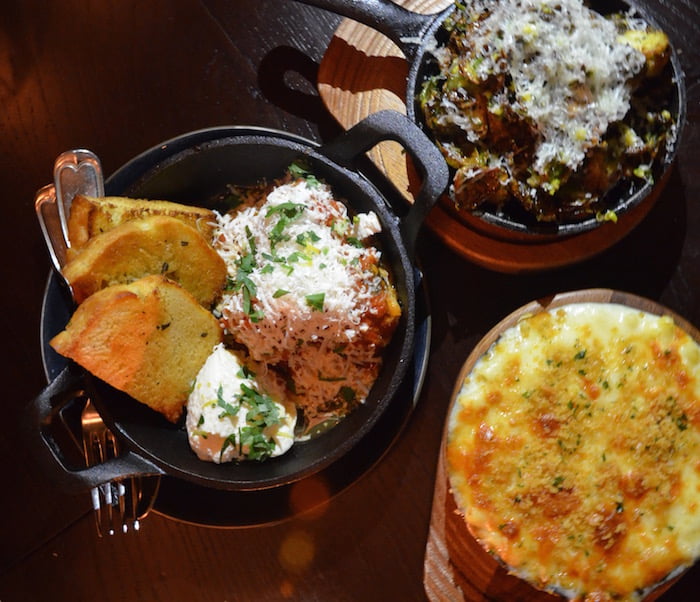 The heaviest dishes were saved till last. By the time ‘Nonna’s Balls ($17) arrived on the table we were starting to question how much we ordered. The Pork and veal meatballs were a classic comfort dish. The salted ricotta and buttery house made herb focaccia finished it off nicely. 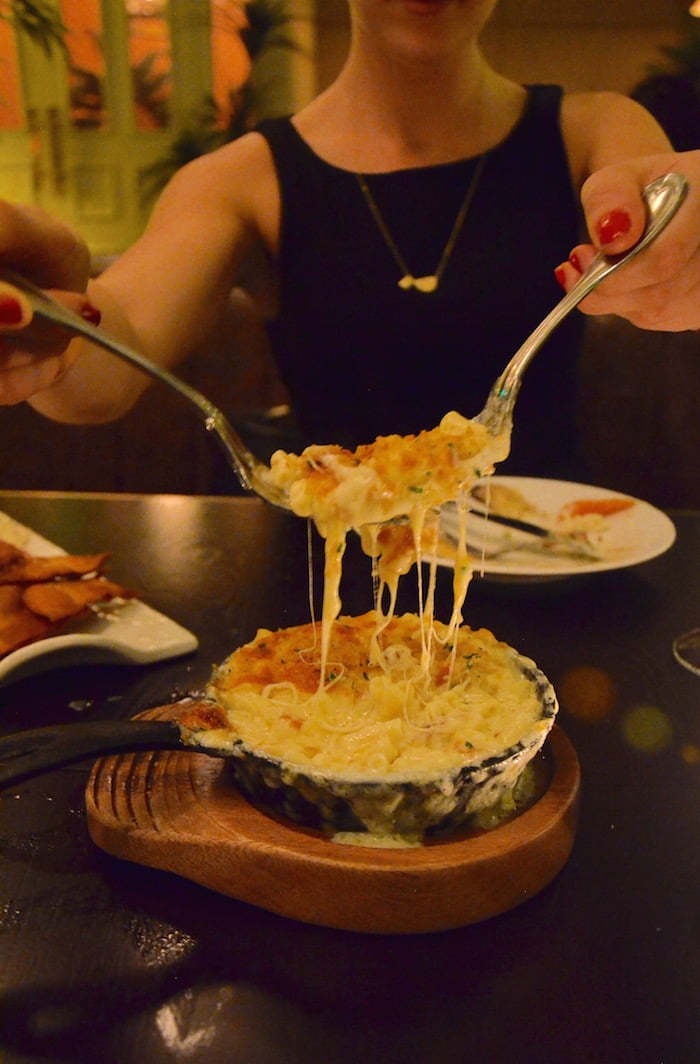 For sides, we opted for the heavier options: the fried brussel sprouts with pistachio pesto and manchego cheese ($10) and a hot skillet full of extra cheesy mac & cheese ($8). 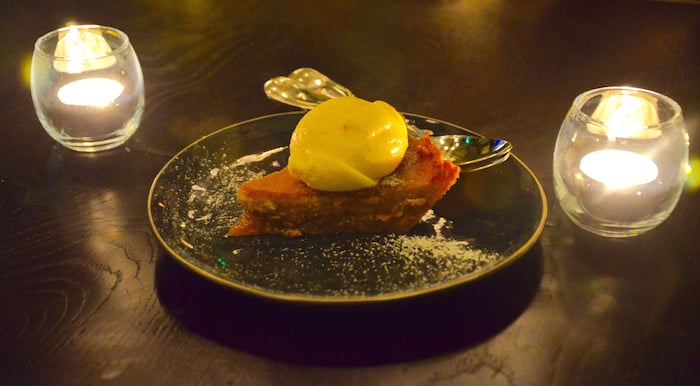 To round it all off, we shared a slice of the ‘world famous’ crack pie served with buttermilk ice cream ($12), a recipe inspired by Momofuku chef David Chang. The pie is a firm biscuit-y, caramel-y piece of heaven that lives up to its reputation and is definitely not to be missed.
Tuna courtesy of Hawaii, hummus from the Middle East, Italian Nonna’s meatballs, French tartare and good ol’ American mac n cheese – Darlo Country Club brings it all to the table. It’s a cheeky menu that brings together an odd assortment of dishes, all tasty and with a touch of playfulness. 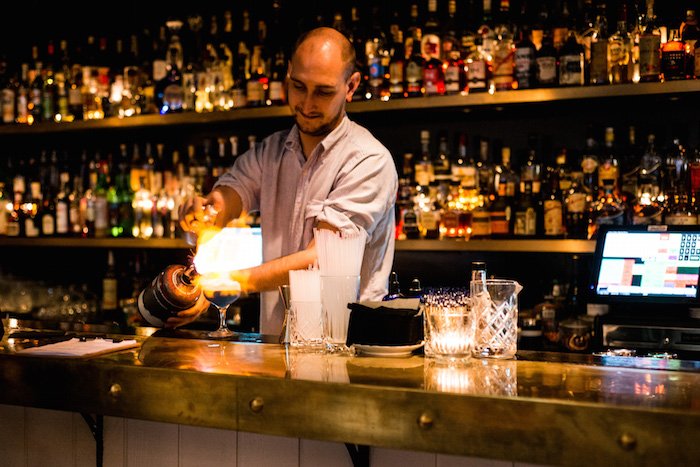 Although Darlo Country Club might not be our go-to sit-down dinner destination, we’ll be back with a group to enjoy the full length of the bar and plenty of dishes to share, for all tastes.
Darlo Country Club
(02) 9380 4279 235
Victoria St, Darlinghurst
Open Wednesday – Saturday 5pm till late
http://www.darlocountryclub.com.au
If you’re looking for bars in the area take a short wander down to Potts Point and check out Della Hyde.