The winners of the Hunter Culinary Food Fight Revealed

What a difference a day makes. Only 24 hours earlier a storm had been wreaking havoc up and down the east coast. The prospect of the Hunter Culinary Association’s 7th Annual Food Fight going ahead looked rather slim. However come Monday it was blue skies all around, and 375 lucky diners descended on the Hunter Valley’s Cypress Lakes Resort for a spectacular showcase of the region’s produce and talent. Pitting chef against chef, flavour against flair, creativity against tradition, the Food Fight sought to fundraise for food rescue charity OzHarvest and various industry scholarship funds. 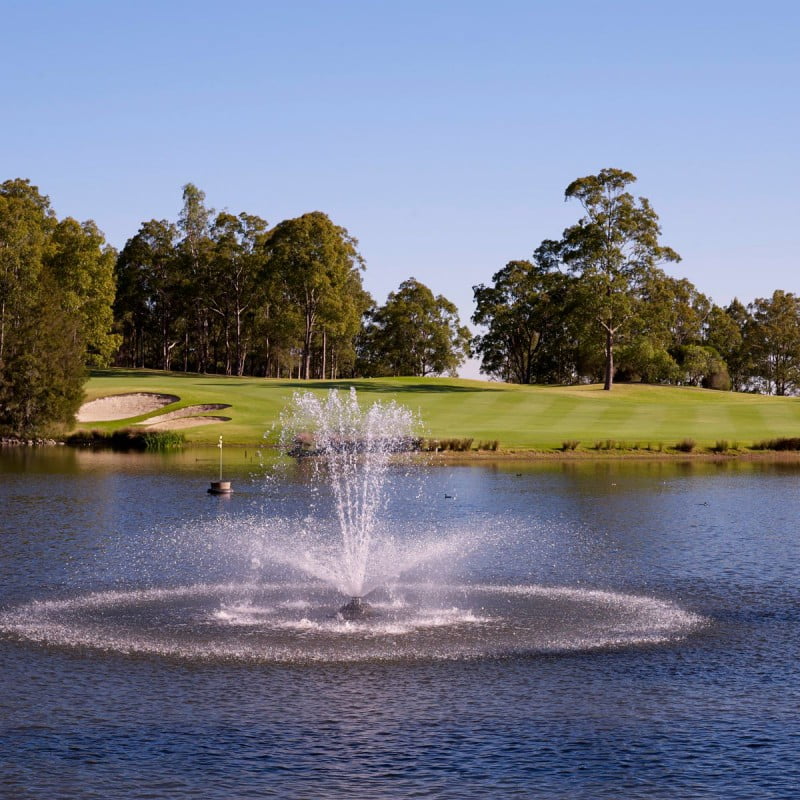 Seeds of the Annual Food Fight were planted ten years ago when chefs from the Hunter Region decided to band together as the not-for-profit Hunter Chefs & Co. And while the organisation rebranded in 2014 as the Hunter Culinary Association, the objective has always remained the same. To foster local and emerging talent, support regional restaurants and food services, and to educate consumers through entertaining culinary experiences. One such program is The Brett Graham Scholarship which allows rising star apprentice chef to work with Chef Brett Graham at his acclaimed London Michelin starred restaurant, The Ledbury. 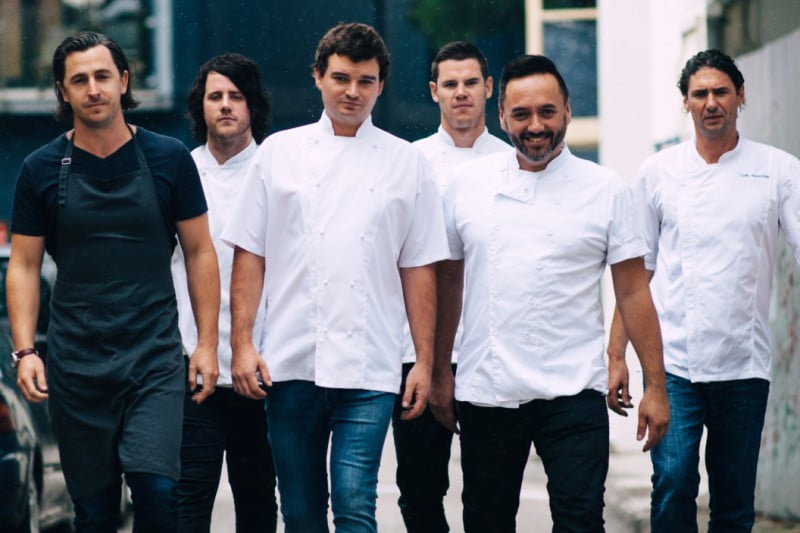 The introduction of the Annual Food Fight seven years ago was another masterstroke for the Hunter Culinary Association. The event draws punters from near and far. And this year the HCA brought in some heavy cookhouse hitters. The event reunited the former team of Sydney’s three-hatted Banc restaurant to cook off against some of the Hunter Region’s top chefs.
In one corner of the kitchen was ‘Home’ team, made up of Troy Rhoades-Brown (Muse Dining), Chris Thornton (Restaurant Mason), Gareth Robbs (Bistro Molines) and Josh Gregory (EXP. Restaurant). And in the other were ‘Away’ superstars Colin Fassnidge (4Fourteen), Matt Kemp (Q Station), Warren Turnbull (Chur Burger), and Justin North (Hotel Centennial). Diners were about to taste some sizzling competition. 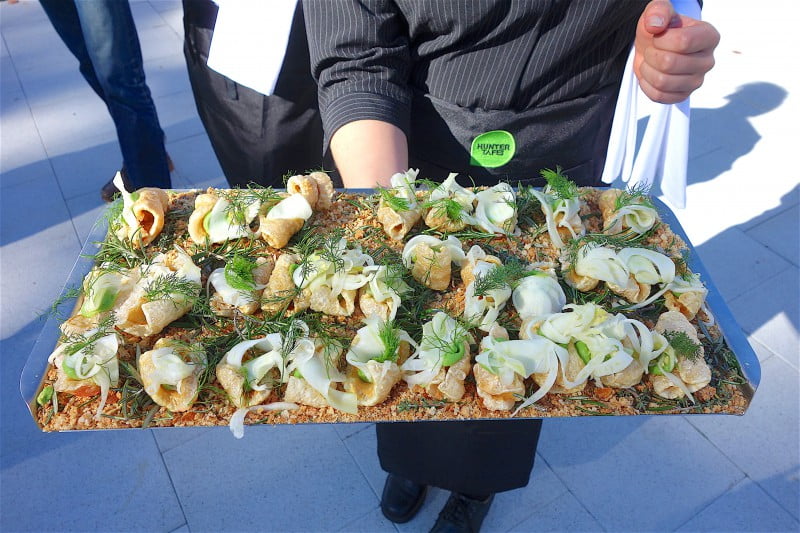 To kick off the Food Fight, we were treated to glasses of Tempus Two Copper Prosecco out on the terrace. Also circling the crowd was an assortment of canapés created by the Hunter Region’s apprentices. They were a lovely start to the day’s course of events with each appetiser made using fresh, locally sourced ingredients.
First out of the blocks was pork crackling with pea and fennel. Although they were sensational on the platter, it was surprisingly light on flavour. The beef tartare on toasted brioche, topped with pickled enoki was delicately balanced. And the fried Binnorie goats cheese with honey, pistachio and wild fennel was melt-in-you-mouth delicious. However the stand out was the spiced kingfish with kohlrabi remoulade and fermented cucumber by Esca Bimbadgen‘s Aiden Dwyer. 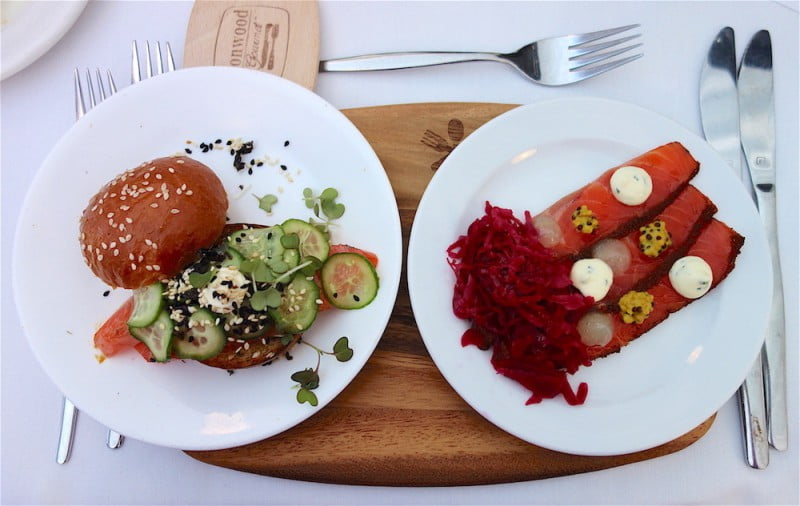 With appetites well and truly whet, diners were then ushered inside the marquee and asked to take their seats. Lining the space were large communal tables elegantly set with twinkly table lamps, keepsake wooden cheeseboards-come-placemats, and bottles of garlic-infused Woodlands Olive Oil.
Guests were charmed by Chairman Ben Neil, and Essex-born Kemp wearing the dual hat of chef and MC with great humour. Kemp quickly revealed the all important rules. After each course we were to hold up our coloured voting cards corresponding to our chosen dish.
Entrée saw (very fresh) Petuna ocean trout prepared in two ways. One team served theirs on a toasted brioche bun with miso, persimmon, pickles, and sesame seeds. The other plated up slices of the fish with pastrami, sauerkraut, cream cheese mousse, pickled cucumber, mustard, and rye. Unfortunately, the former dish didn’t measure up to the latter; the brioche was unevenly flavoured and overwhelmed the lightly seasoned ocean trout. In comparison, the other team’s fish was subtle and wonderfully sweet, and expertly dotted with contrasting flavours and textures. It was hands down the winner on this reviewer’s table. 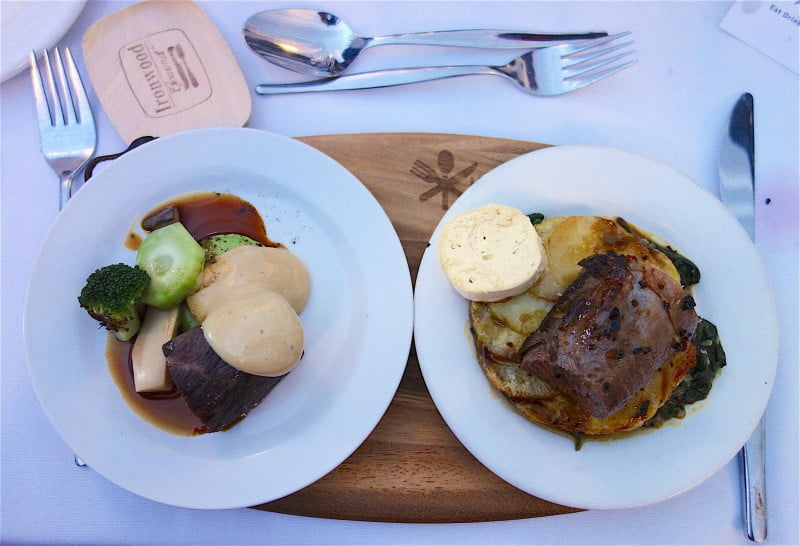 After diners finished off with First Creek and Scarborough Wines white the mains were served. They were matched with glasses of shiraz by McGuigan Wines and Tulloch Wines. One team chose charred rump cap for their showpiece with King Brown mushrooms, broccoli, ash, potato and black garlic foam. The other, and no prizes for guessing which, decided on Paroo ‘Roosini’ – a play on a classic Banc dish with kangaroo wrapped in pancetta with potato, spinach and blue cheese butter.
The former dish was a heartening ode to comfort food. And despite the inclusion of the black garlic foam, there was not much in the way of originality in what was ultimately a very traditional dish. The roo on the other hand reflected a masterful balance between invention and tradition. The fillet was perfectly tender, and the flavours superbly distinct. It had this reviewer’s vote. 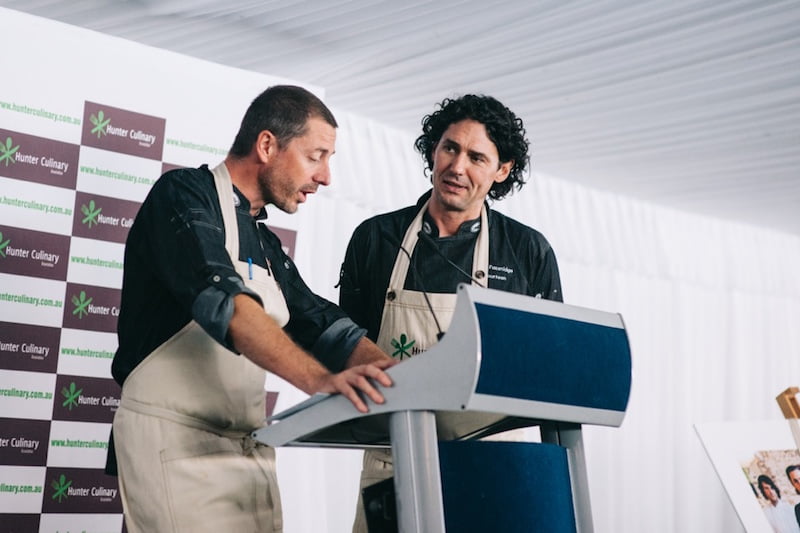 After the mains Fassnidge joined fellow teammate Kemp onstage for some entertaining salesmanship for the ensuing raffle and auction. A great number of items were up for grabs. They ranged from a signed cookbook to private dinners hosted by various chefs involved in the Food Fight to a trip to London complete with a dining experience for two at The Ledbury.
Chairman Neil had hoped the Food Fight would honour the Hunter Culinary Association’s ten year anniversary by raising $20,000 to bump their overall fundraising grand total to a nicely rounded $100K. Guests dug deep and raised a whopping $38,000 in support of the HCA’s industry scholarship funds and OzHarvest. It was a remarkable effort. 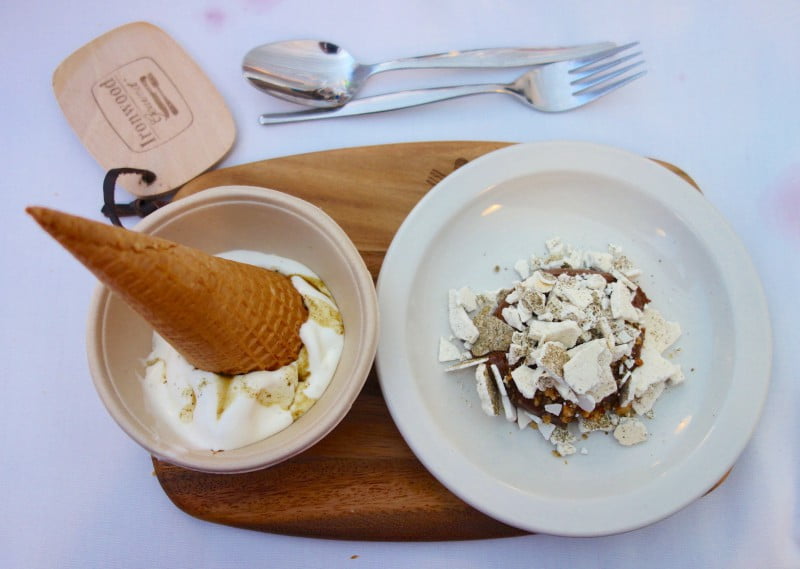 Then it was Dessert time. On the terrace was an ice cream van which Fassnidge had hired to pump out soft serves for his team’s essence of lemon tart. It was a fantastically gloopy creation with vanilla ice cream drizzle with a lemon syrup and topped with waffle cone filled with dark chocolate and more lemon. In contrast, the Hunter Region team dished out soft chocolate with macadamia and crisp natives. The saccharin of the dish was fabulously evened by the fizzing bite of the crumbly topping, making it the winner at this reviewer’s table by just a wafer. 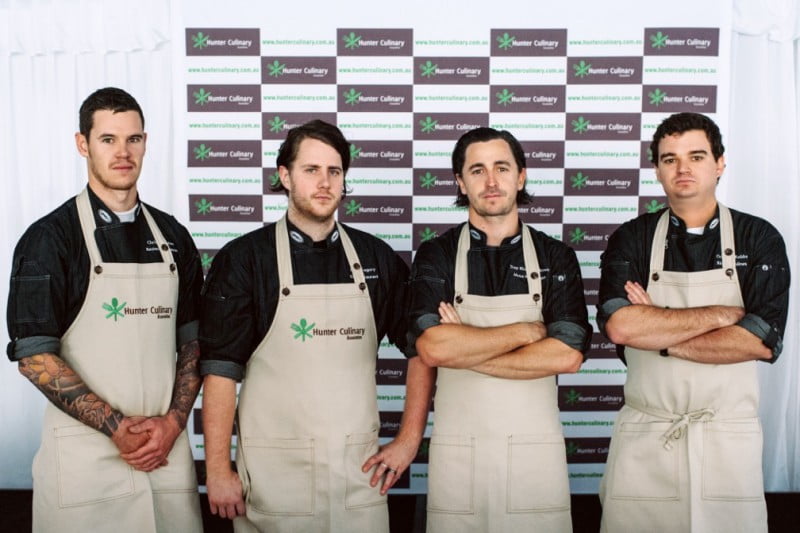 After all the hard work to wine, dine and indulge 375 guests, plate up 2200 dishes, and raise tens of thousands for charity, it felt almost like a discredit to those involved to tally votes. Almost. In keeping with the spirit of the day we were all keen to find out the winner of the Hunter Culinary Association’s 7th Annual Food Fight. Both teams put on a mighty display, however a big congratulation must go to the boys of the Hunter Region ‘Home’ team. As a Sydneysider, it was a pure joy to experience the area’s virtuosity. Yours was a well-earned win. And to their worthy adversary, the ‘Away’ team, better luck next year.
The Hunter Culinary Association’s 7th Annual Food Fight took place on Monday June 6 at Cypress Lakes Resort. For more information visit http://www.hunterculinary.com.au