The Best Breweries in Sydney

Beer you brew-tiful thing. It’s time to get brewery-hopping with this guide!

Our love for beer is stronger than ever with breweries popping up at the same rapidity as Sydney’s thriving restaurant and bar scene. I202

Located in the heart of the Inner West, the Akasha Brewing team are experts in crafting flavourful, crisp and refreshing beers. At their Five Dock brewery and taproom, you’ll find them feverishly working away to create hop-forward, high-quality and 100% fresh brews for lovers of all things craft beer. When you spot Akasha’s cans or logo on the taps of your local pub, you can guarantee you’ll be in for a treat. Find out more and book here. 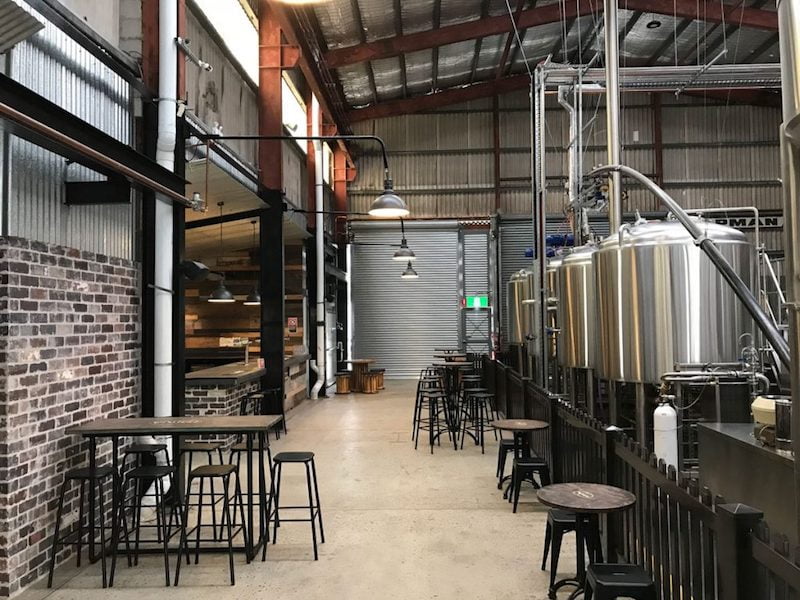 This Marrickville brewery and taproom is all about experimental and flavoursome beers. On one end of the spectrum is the tangy ‘Peach Sauce’, while at the other is a dark, smooth and chocolatey ‘O Oh! Cascadia’. Pull up a stool in the expansive warehouse or if the sun is shining, head out back to the beer garden. Find out more and book here.

What started off as two friends Richard Adamson and Oscar McMahon) mutual love of beer has culminated in the creation of an internationally recognised brand. The Newtown brewery is now a well-revered community hangout, where the rock n’ roll tunes are loud and the vibes are always high. You can also do weekly brewery tours to help you fully appreciate the journey from grain to glass. Find out more here.

When a microbrewery wins Champion Beer and Champion Small Brewery a mere three months after opening its doors, it’s bound to spark your interest. Modus Operandi, a humble brewery in Mona Vale, entered the beer scene fairly quietly in 2014. Fast forward 8 years and they’ve now asserted themselves as one of Australia’s top independent breweries. Find out more and book here. 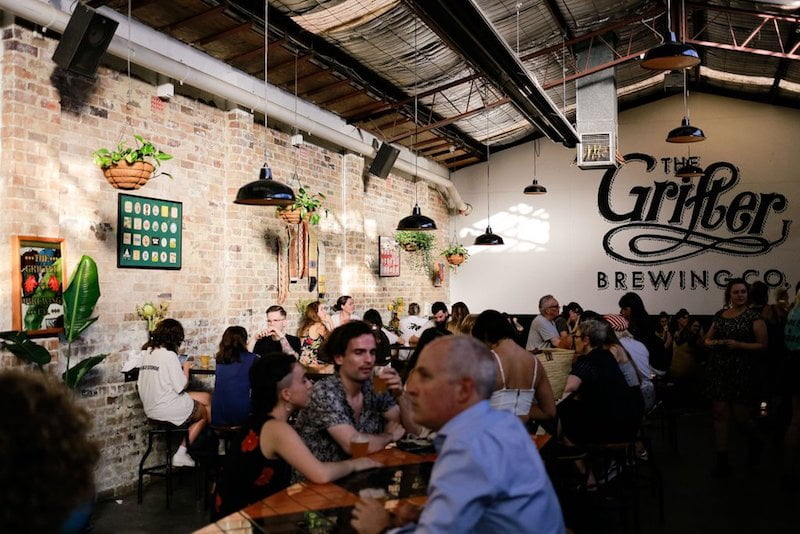 What started off as a passion project between mates Trent Evans, Matt King and Glenn Wignall has grown into a brand Aussies love and adore. The brewery sits in esteemed company, with Wildflower Brewing and Young Henrys both within walking distance. Head to the industrial warehouse and be sure to try the Serpent’s Kiss, their signature watermelon Pilsner. Find out more here.

Dubbed the ‘makers of Australian wild ales’, the beers at Wildflower Brewing are all fermented with a mixed house culture of brewers yeast, wild yeast and bacteria foraged from NSW. Head to the Marrickville warehouse each Friday and Saturday for beer samples, takeaways and to get your hands on some cool merch. Find out more here. With a 24-tap cellar bar at your fingertips, you won’t get bored of the beers being served at Wayward Brewing Co. Drink your way through a constantly changing tap list, with both Wayward favourites and single-batch Wayward beers available. To curb the hunger pangs, Wayward’s resident food trucks are on hand every Friday, Saturday and Sunday. Find out more here. 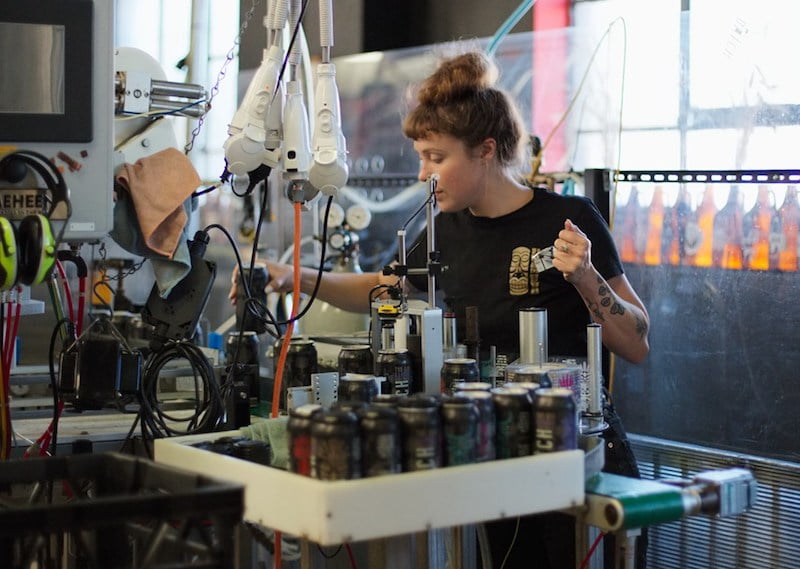 Gracing Marrickville with its inventive brews since first opening its doors in 2013 is Batch Brewing Co. Like all solid breweries, you’re met with an industrial fit-out, complete with repurposed pallets, leather couches and milk crates for seats. The beers come with whacky and incredible names like Elsie the Milk Stout, Pash the Magic Dragon, The Big Kahuna and Señor Spicy, to name a few. Find out more here.

Nestled in the heart of the Northern Beaches is Nomad Brewing Co. Entering the brewers market in 2014, they’ve stayed true to their Aussie roots, using native ingredients including finger lime, lemon myrtle and wattleseed in the brewing process. Their ‘Freshie Salt and Pepper’ beer is even brewed using saltwater from Freshwater beach. Head to the cellar door and taste your way through 11 taps of constantly rotating craft beer. Find out more here.

With possibly one of the greatest names in the brewing business, Wille the Boatman invites you to hop aboard and come with your sea legs, as you take a journey through Willie’s flavoursome brews. The Inner West brewery, taking up residency in St Peters, offers a laid-back and welcoming vibe, with plenty of beers to keep you and the crew feeling merry. Find out more here. Sydney’s oldest pub brewery, The Lord Nelson, is recognised around the world for its award-winning beers, food and accommodation. Sip your way through the six mainstay brews and be sure to keep your eyes peeled for their signature seasonal brew. Team it with one of the Lord Nelson’s beef pies with mash potato and gravy and you’re in for a good time. Find out more here. Taking up residency in an old factory space in Marrickville, Stockade Brew Co boasts a massive 250pax space, giving you plenty of room to move and sample the core range. The core range of Stockade brews sits alongside a constantly rotating list of guest taps. Find out more here. 4 Pines Manly has gone from strength to strength, with four venues to their name scattered around Sydney. While they continue growing the 4 Pines empire, it all began with the original microbrewery in Manly. Nothing quite beats heading to the Brewpub, grabbing a pint from the revolving Kellar Door taps and soaking up the Manly magic with waterside views. Find out more here.

A vegan taproom and brewery, you say? Yulli’s continues to defy all conventions with its all-vegan brewery and vegetarian menu. Set up in a warehouse in Alexandria, Head Brewer James Harvey is passionate about brewing ales, lagers and stouts that are free from animal-derived products. As for the food menu, plant lovers and carnivores alike swoon over dishes like dumplings, gyros with chips, Southern-fried spice cauliflower, nachos and more. Find out more here.

For a brewery located just a stone’s throw from the ocean, this next spot truly pays homage to the waves of the Sutherland Shire. In fact, Shark Island Brewing takes its name from the iconic reef island surf break found just off the Point of South Cronulla. Founded by a pair of homebrewers who cut their teeth at the likes of 4 Pines and Balmain Brewing, their Kirrawee cellar door is about as relaxed as they come. Sip your way through taps of seasonal session beers, with food trucks every weekend to keep punters fed and watered. Find out more here.

For those also local to The Shire, this next inclusion will come as no surprise. Nestled in Woolooware Bay, Hairyman Brewing delivers an exceptional brewery experience (minus the trek to the city). At this brewery, you’ll find 8 craft beers on tap with a rotating selection of seasonal brews to keep things fresh for drinkers. Swing by for a chat with the brewers, with kids and furry friends always welcome. Find out more here.

South Sydney, meet your first micro-brewery. Since swinging open its doors in 2019, One Drop Brewing Co. has made its mark on the city’s craft beer scene. And with good reason. Located in Botany, these guys have already taken out a slew of awards for their innovative brews, including their Botany Bay Lager, Blueberry Sour and Stout. Swing by this lofty converted warehouse to try each release for yourself, with a rotating line-up of food trucks from Wednesdays to Sundays. Find out more here.

Know any great breweries that we’ve missed? Let us know at newsletter@eatdrinkplay.com