Because what better way to end a baking hot beach day than with a crisp cold one overlooking the surf?!

Bondi has scored a run of cool new venues this year including NY pizza institution, Mikey’s, Italian snack and jukebox joint, Ori’s Bar, and now, completing the trifecta of sweet post-swim hangouts, Curly Lewis is making waves for all the right reasons.

Opening August 19th, Curly Lewis has arrived just in time for a sunny spring sesh. Located slap bang on Bondi’s iconic Campbell Parade, the venue will be the first of its kind in Bondi’s history.

Siblings, co-founders and fourth-generation Bondi residers, Adam Richards & Loren Morton have created the offering they wished was available in the Eastern Suburbs – a working brewery, bar and diner serving up casually cool Bondi vibes from day to night.

The beer tanks are a main feature in the 120 seat space, with guests being able to watch the brewing process from the diner. Pull up a pew at the long timber bar as bartenders pour cold beer from the taps as the fresh sea breeze hits the back of your neck for the perfect wind-down from a long, hot beach day.

The venue’s 20 stainless steel taps will be pouring the ‘always here’ core range of; Curly Lewis Clean Cut Lager – a crisp, smooth straight-up lager; and Bondi Hazy Ale – a hazy and hoppy ale with beachy tropical notes. The remaining taps will feature rotating seasonal beers titled ‘wildcards’. Expect to see a rotating menu of beers thanks to an on-site brewing system including a sour and salty Gose, all the way through to a rich coffee stout. 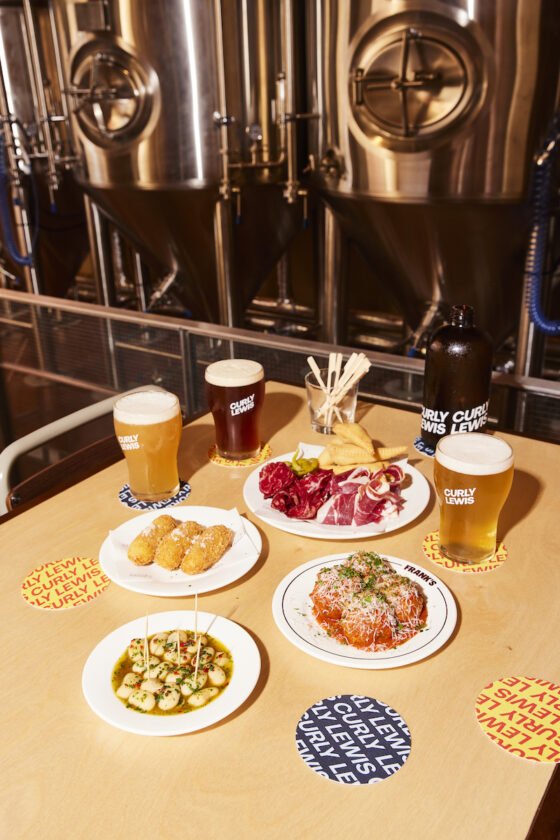 The food menu offers the perfect Bondi balance of delicious-done-casual with beloved Bronte Road eatery Frank’s Deli heading the kitchen. Chef and co-owners Sammy Jukubiak and Ben Kelly have designed a menu of salty, European-inspired snacks and plates, including Frank’s famous meatballs, and renowned Reuben Sandwich. Plus a must-try burnt basque cheesecake (if you know, you know) which is the perfect finisher to a day of beer and beach fun.

Curly Lewis is now open Tuesday – Sunday for all your post-swim needs, find out more and secure your seat here.