Sydney Brewery takes up new residency in the inner-city.

Beer lovers, something big has been brewing in the inner-city, with Sydney Brewery proudly opening its doors on Surry Hills’ bustling Albion Street. Marking the new home for this craft brewery’s beloved beer and cider production, a range of boutique brews will be perfectly matched to a beer-led food menu.
Take a look inside to find plenty of exposed bricks teamed with raw concrete and naked timber. Pops of greenery add needed vitality to the industrial space, which aims to channel a fresh take on an old-school brewery house.
This craft brewery marks the first location in the inner-city, with Sydney Brewery first setting up production in Lovedale in the Hunter Valley in 2014. The new venue, located within the Rydges Hotel, comes with its own set of localised brews, including the Albion Ale (brewed on site), plus the Surry Hills Pils and Darlo Dark. 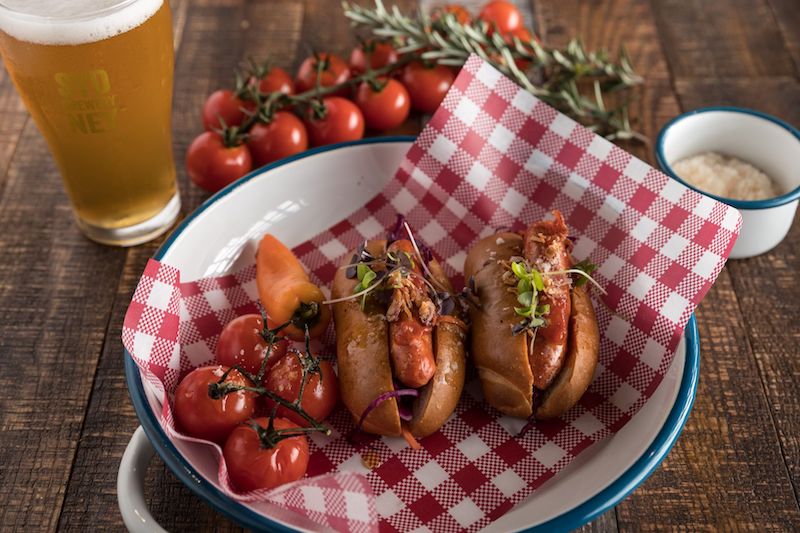 While the beer remains the resounding hero at Sydney Brewery, on the menu you’ll find plenty of spruced pub classics. Think slow cooked beef ribs in sticky porter sauce, Paddo Pale bratwurst with Sydney Cider red cabbage and garlic mash, plus the Sydney Cider mussel pot with aioli and freshly baked bread. Larger share-style dishes include the Chorizo Dog with pepper relish and salsa verde and the Shake n Bake chicken tender with chipotle aioli.
Sydney Brewery want you to ease into your weekend, offering up a range of live music including DJs hitting the decks alongside a rotating roster of local bands.

Underpinning the extensive renovation was owner, Dr Jerry Schwartz’s determination to bring an exciting new offering to Surry Hills:
“Surry Hills is an ever evolving and thriving community of residents and businesses and we wanted to celebrate this with a local craft-brewery offering, a great spot for a casual lunch or after work drink, whilst also giving locals the opportunity to take home a fresh growler of Sydney’s best beer,” said Dr Schwartz.
Sydney Brewery is open Monday – Wednesday from 11am to 11pm; Thursday – Saturday from 11am to 11.30pm; and Sunday from 4pm to 11pm.
Sydney Brewery
28 Albion St, Surry Hills NSW