A Taste Of French-Asian Fusion At Bar Chinois

From the flourishing foodie destination of Kensington Street in Chippendale arises another new hotspot. Next to the likes of Kensington Street Social and Bistro Gavroche sits this new French-Asian darling, Bar Chinois. A surprising combination yes, but even in the name,– Chinois means Chinese in French – proves it’s both a delicious fusion of both flavours and cultures. 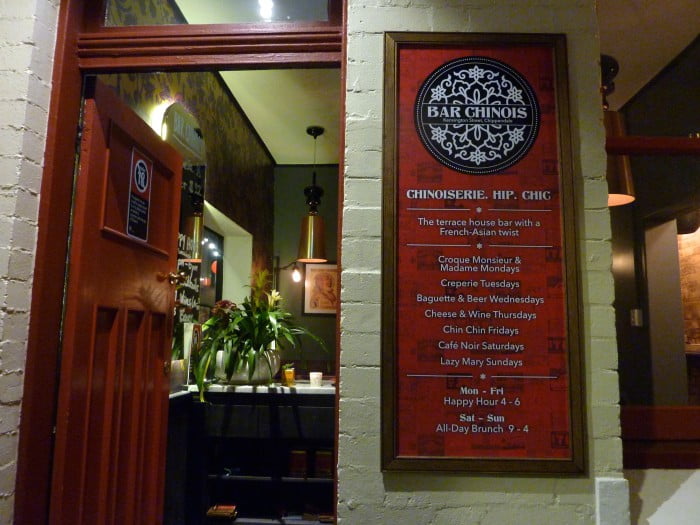 Quaint terrace-style house on the outside, sophisticated Parisian wine bar on the inside, with a surprising soundtrack of Backstreet Boys greatest hits blasting through the speakers. Everything is not as it seems at Bar Chinios. As we walk through the back, we are warmly greeted by staff and guided through a maze of charming, crowded, little rooms, to a small, table for two by the window. 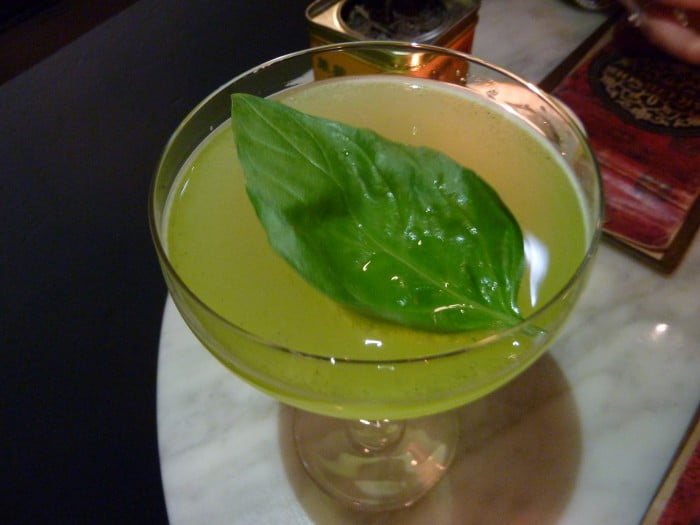 Their cocktail list has been specially crafted to match an exciting menu of French-Asian flavours. We start with the Basil Smash – vodka, apple, Cointreau and basil! Basil? Sacre bleu! But it was light, peppery and championed that basil flavour beautifully while expertly blending with the apple and lemon. Likewise our second cocktail had the same wow factor. The Ginger Whiskey Sour was a well-balanced drink with a subtle taste of ginger and a smooth, whiskey aftertaste. 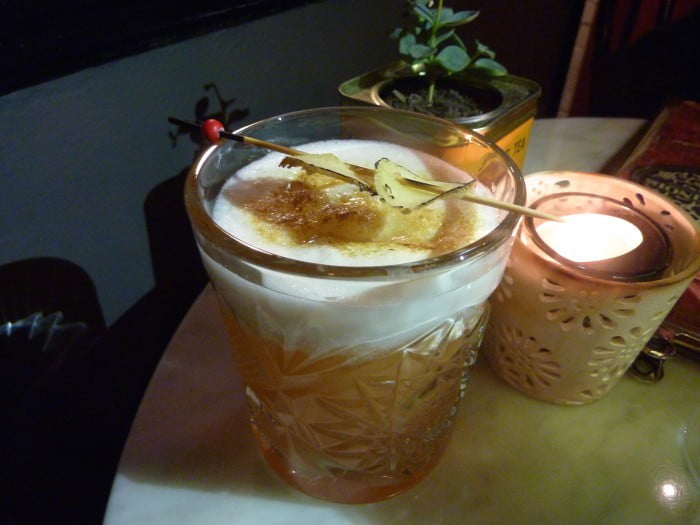 Their signature cocktail is the La Dame Chinois, a concoction of many spirits – vodka, coconut rum and lychee liqueur.  It proudly boasts a hint of jalapeno, which initially hits you hard but then softens to a refreshing, lychee flavour. Then there’s the Madame Rouge, a cocktail combining strawberry and scotch with amaro (herbal liquor), which is quite a pretty drink indeed. 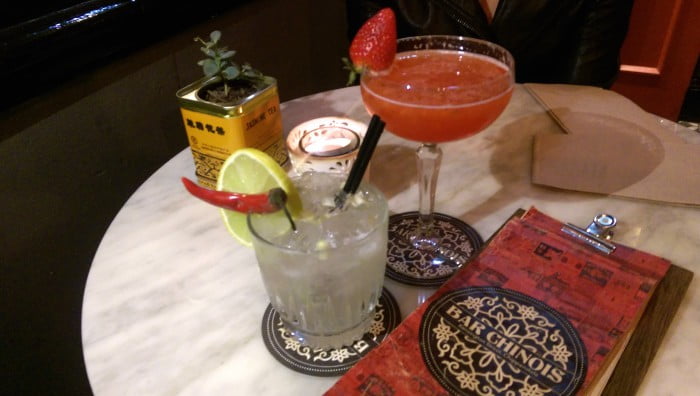 Their food is predominantly French, but there’s a few Asian surprises popping up throughout. We love the idea of pickled daikon with their cheese platter and the inclusion of both a croquet monsier and madame on the bar menu. However, we went for their new special of the week – the spinach and cheese spring rolls, a perfect first taste of this exciting fusion. They were crunchy on the outside, soft on the inside, with a healthy dose of spinach to relieve the guilt. 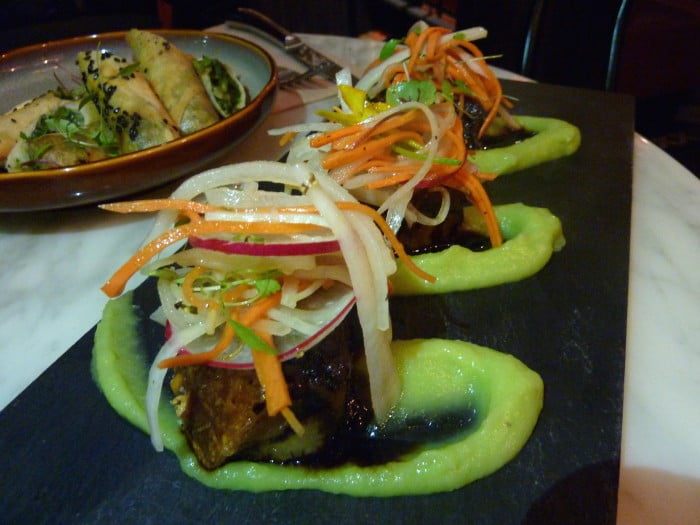 To counteract, we tried their pork belly bites: slow cooked pork belly, coated with sticky, chilli soy sauce and decorated with a good mix of Asian veggies. Our knives went effortlessly through the pork and it simply melted in our mouths. 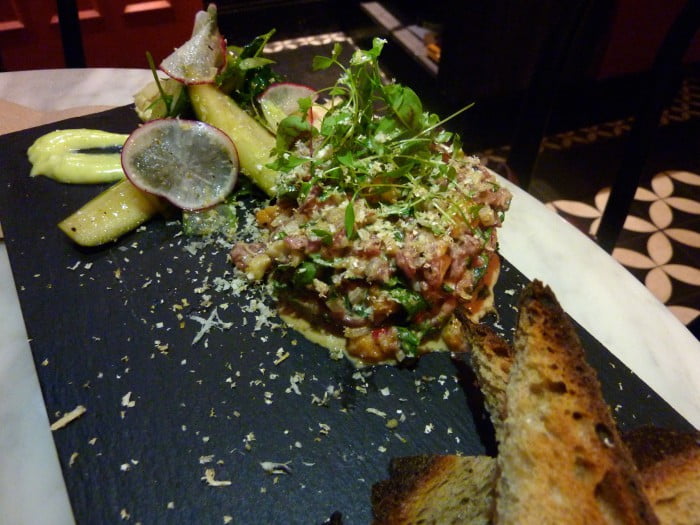 Finally, we had beef tartare with eshallot, nam jim, horseradish, toasted rice, Dijon mustard, and toasted baguette. The bread is an excellent addition as it really soaks up that tangy sauce. The flavours of the tartare are quite powerful, it’s definitely a dish worth sharing, you only need a small portion. 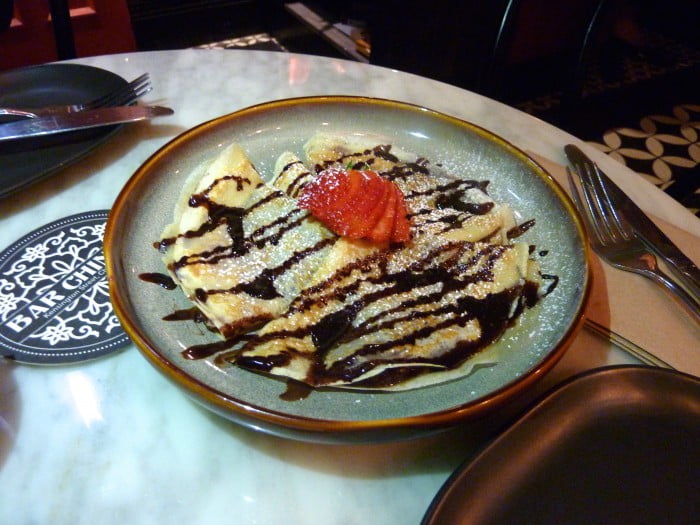 We finished off with a simple chocolate crepe, chocolate sauce lovingly drizzled over some fluffy soft, crepes. Or so we thought we were finishing, but were wrong. To give us the full experience of “Lazy Mary Sundays,” which includes the piece de resistance: the Bloody Mary. 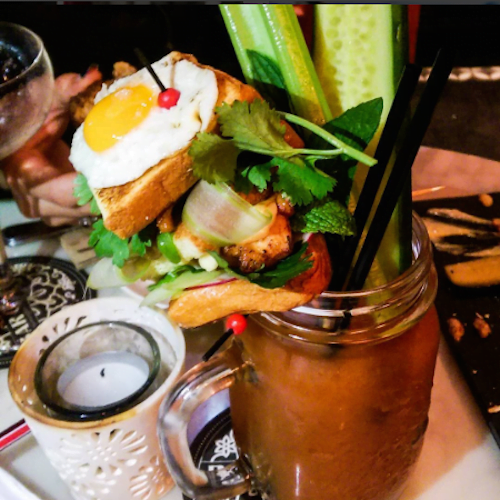 Enjoy one of these babies on a hungover Sunday afternoon, and get a bonus little meal perched on top. Sticking out of our Bloody Mary was a miniature croquet madame, stuffed with pulled pork. And inside the drink to give it a bit of sweetness and extra spice, we had wasabi and mango chutney, just to really put the cherry on the top of this crazy drink. And it all works! 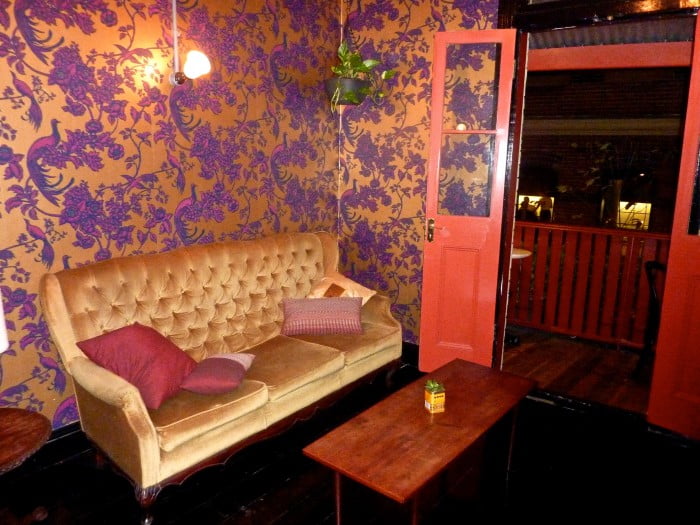 Enthusiastic and welcoming service with a smile makes Bar Chinois a great place for a quiet drink or three, a cute date spot but also great for groups in their upstairs area. This little French-Asian bar does both their cultures proud.
Bar Chinois
16 Kensington Street, Chippendale
Open Mon – Sat 12pm – late, Sun 9am –10pm
See website