Tasmania, an island off an island, may very well be Australia’s underrated treasure. It’s not often that Tasmania sits atop the list of holiday destinations, but it unquestionably should. It’s as if all the best things about Australia were combined to create a small state once known as Van Diemen’s Land. Whatever it is you love about Australia, Tasmania has it! It’s eclectic mix of farmland, rainforests, lakes, wine valleys, national parks, turquoise water, mountains, hiking trails, driving routes, deserted beaches and delicious food make Tasmania a must-see for both Australians and travellers worldwide.

Here are 5 things you must do in Tasmania:

1. THE AIRWALK IN TAHUNE NATIONAL PARK
If you are a rainforest lover then Tahune National Park is the place for you! Known for it’s famous AirWalk, where visitors can walk on a cantilever amongst the treetops, this National Park has something for everyone. From short, laidback walks where you can find the famous Huon Pine to harder hikes for those who want a challenge, Tahune is a site worth visiting. But don’t leave without completing the Airwalk! It has sweeping views across some of the tallest trees in Australia and looks over the Huon and Picton Rivers from a height that would otherwise be impossible to reach.

Located just 1.5 hours south of Hobart, most people try to squeeze the trip into one afternoon but the five or so walking trails can certainly keep you there all day! 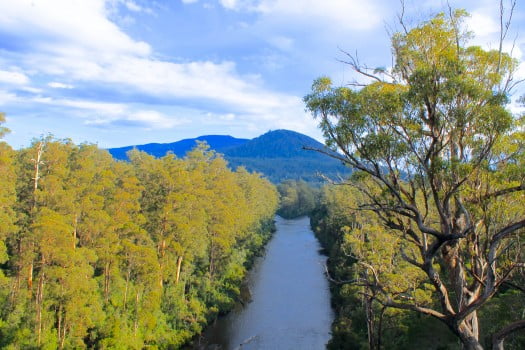 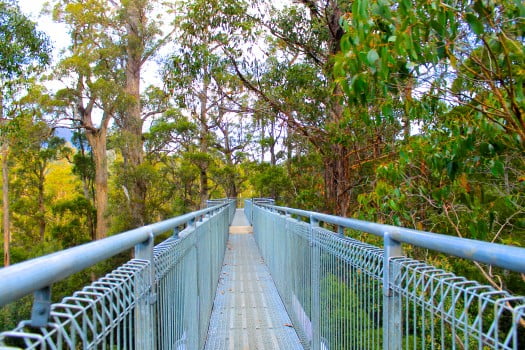 2. THE HIKE TO HAZARDS BEACH IN FREYCINET NATIONAL PARK
Freycinet National Park sits along the East Coast of Tasmania about 2.5 hours from both Hobart and Launceston, which is what makes it so special. Being a waterfront national park, Freycinet gets the best of both worlds. There are deep rainforest yet also beautiful deserted beaches with crystal blue water.

The Freycinet tourist attraction is the Wineglass Bay lookout, which is a 40-minute up-hill climb to a spectacular viewpoint. Many people stop their Freycinet adventures there but if time is not of the essence – the walk to Hazards Beach is where the true beauty of the national park lies. The extra 3.5-hour walk may seem discouraging at first but is undeniably the most amazing part of the adventure. Once you walk down to Wineglass Bay from the lookout, a path leads you through the middle of the National Park to the Western side of the peninsula, where the people are gone, the waters are without a ripple, and the silence allows you to really absorb the hidden magnificence that is Hazards Beach. 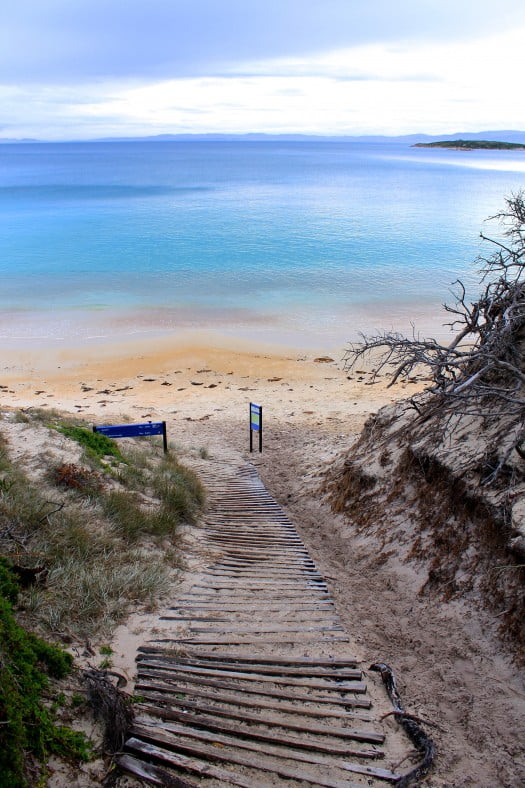 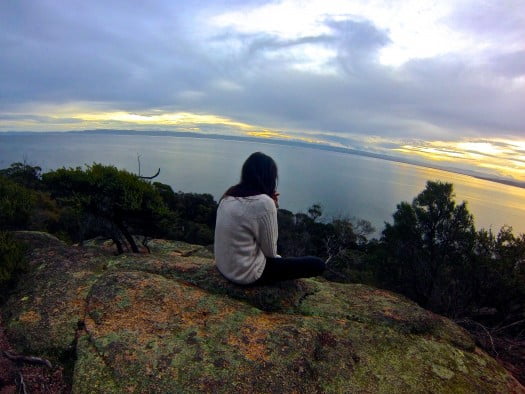 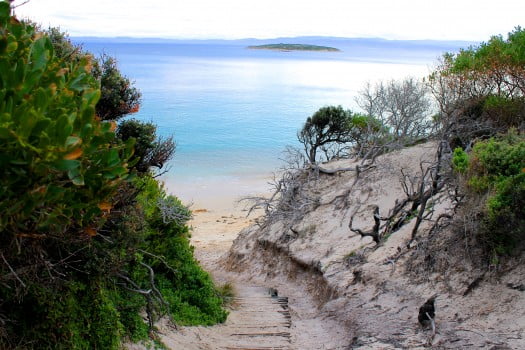 3. THE VIEW FROM MOUNT WELLINGTON
Being a mere half-hour drive from Hobart CBD, there is a large shock factor when you are standing at the summit of Mount Wellington. Being over 1,000 metres above sea level, winds atop this mountain have reached 174km p/h; but the panoramic views make up for it, even if you have to hold on to the nearest pole to keep you grounded. With sights over Hobart and out to Bruny Island, Mount Wellington reminds you how beautiful Tasmania is.

The amazing thing about this must-see mountain is that no matter how sunny and warm it is on the drive (or hike) up, the temperature is at least 10 degrees lower at the peak! It may even be snowing if you’re lucky! 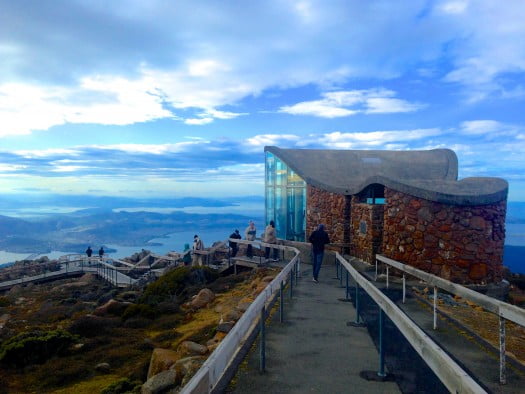 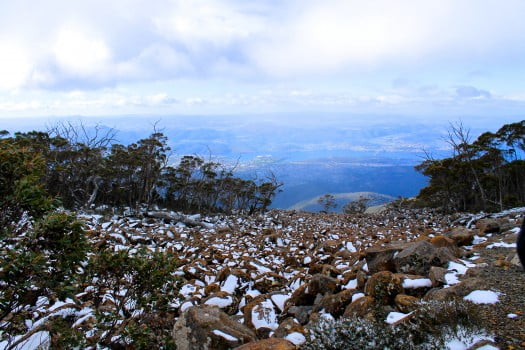 4. INDULGE IN THE BEST FOOD TASMANIA HAS TO OFFER
Some of the freshest produce comes from Tasmania, which explains why the food in Tasmania is just that much better than the rest of Australia. Buy some fruit from the side of the road, stop at an oyster farm and eat freshly caught seafood that would only be better if you caught it yourself.

Barilla Bay Oyster Farm and Restaurant is a must-do if you’re anywhere near Hobart – and give the bloody mary oyster shooters a go, they don’t disappoint! The rest of the Tasmanian seafood is just as great – Atlantic salmon and local abalone are tasty anywhere but the secret to a good Tassie meal is the ‘fish of the day’!

If you happen to be south of Hobart (on the drive to Tahune national Park), you will pass many self-service stalls on the side of the road selling apples, pears and other fruit – do not hesitate. At $2.50 a bag, these fresh packages of fruit will last you all week! 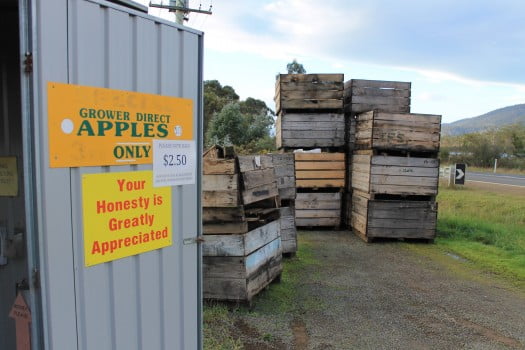 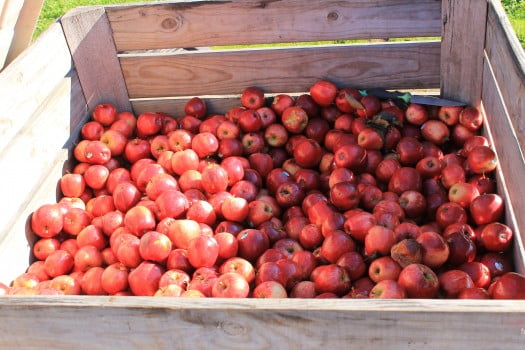 5. VISIT THE TAMAR VALLEY
The quaint town of Launceston is the gateway to the Tamar Valley; Tasmania’s oldest wine region. Known by the success off the Tamar Ridge winery, the Tamar Valley Wine Route takes you past over 20 wineries. Placed on and around the Tamar River, the vineyards of the valley are left with postcard views making it that much more special while driving through.

The Tamar Valley is known for its sparkling wine and pinot noir and while trying to taste them all you may even come across another sort of Pinot – Pinot the Pig. Being a large part of the branding of local winery Holm Oak, Pinot the pet Pig is loved among locals and visitors and even made a cameo appearance in ‘Wine Dogs Australia’, where pet dogs at all wineries across Australia were photographed and put in a book. Don’t forget to feed him some apples – he loves apples. 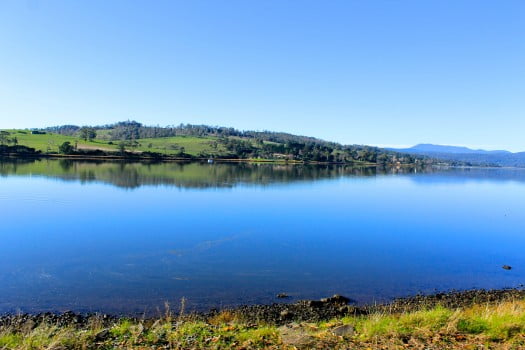 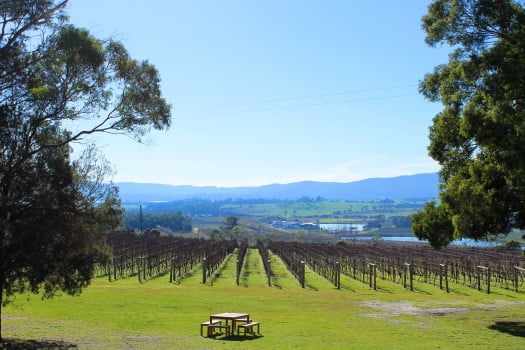