10 questions with The Beer Pilgrim

Beer-lovers could only ever dream about exploring the world in search of the best beer. But one young man, known as ‘The Beer Pilgrim’ has done just that. He trots the globe meeting some of the most interesting people in the industry and sampling that sweet golden ale. We recently caught up with this mysterious man for 10 Questions With… 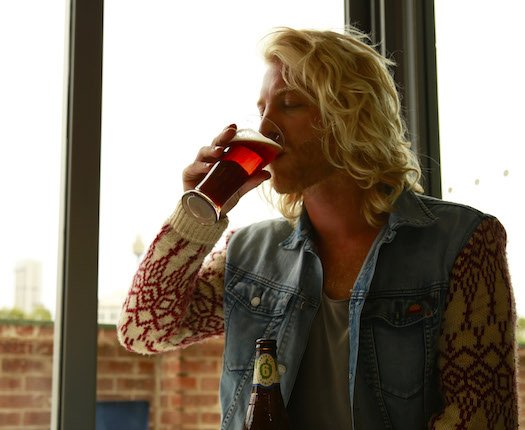 1. What inspired the dream of The Beer Pilgrim?

I suppose it was a combination of being inspired by a growing public interest in beer, realising there was a general misunderstanding about beer, and mixed with my own personal desire to travel the world drinking beer, talking to brewers, digging up stories about beer and letting the world know how fantastic it is!

2. Can you briefly explain the brewing process for beer?

The brewing process of beer is essentially the same across the board; no matter how big or small the brewery might be (even if you are home-brewing). Basically, there are four core ingredients in beer; malted grain, hops, yeast and water. Though some brewers are starting to add various other ingredients to their beer (such as coffee, chocolate, fig, orange peel, thyme, sage or coriander), the four core ingredients remain constant. The process is quite long and technical (many brewers also have degrees in microbiology), but I will give you a very basic rundown.

3. In what country have you found the best beer?

So far, I have to say Australia although my journeys as The Beer Pilgrim have only taken me around Australia and England so far. I’m looking forward to stepping out into the wider world of beer next year! ‘The Feral Hop Hog’ from Western Australia is my favourite beer at the moment.

4. At what age did you find an interest in beer brewing?

I probably made my first homebrew when I was about 20 years old in the laundry of my rented apartment in Bondi. However I’m not a brewer, I’m more of a writer, photographer and film-maker with a beer obsession.

5. Where do you EAT when in Sydney?

I love seafood more than anything, but I’m also quite conscious of where we get our seafood from in Australia (I have spent a couple of days out on Australian trawlers/long-liners and I think I’ve been scarred for life). This means I spend a lot of time catching it myself. So I guess while I’m in Sydney, you can find me eating a fresh catch of fish at my house with my family and friends.

6. What has been the most challenging aspect of starting up The Beer Pilgrim?

Probably deciding which beer to start with. I don’t think it has been particularly challenging, maybe a few sleepless nights tackling the role of host, cameraman, photographer, writer, director and editor at the same time, but the material itself has been well received and my online community has grown faster than I could have ever imagined.

7. Any big plans coming up for The Beer Pilgrim?

International Beer Day is coming up on the 1st August and I will be hosting an event to help break the World Record for the ‘largest beer tasting at a single venue’. It is at Ivy Sunroom, Level 3, 330 George St. I’m extremely excited about that one and I invite everyone to join me!

Once that is over, I’ll be jumping back in my van and heading down to the Snowy Mountains to pick up a keg of beer I stashed deep inside a 4 million year old cave nearly a month ago!

8. Where is your favorite place to DRINK in Sydney?

There are a lot of incredible bars in Sydney and it depends on my mood and who I’m with. If I’m looking for a good craft beer, then I like the ‘Local Taphouse’ in Darlinghurst or ‘Quarrymans’ in Pyrmont. If I want a beer right at the brewery, I’ll go to the ‘Redoak’ beer café in the CBD or to ‘Young Henrys’ Brewery in Newtown.

9. How many different types of beer are there to try?

How long is a piece of string? The list really is endless and keeps growing on a daily basis. It’s mind-blowing what brewers can do with four essential ingredients.

10. When you’re not working, where do you go to PLAY in Sydney?

I love surfing, sailing and spearfishing, so you can generally find me somewhere on, in, or next to the ocean. Anywhere from Cronulla up to Palm Beach.