Solander’s new menu is ode to a Swedish naturalist, Australian flora and fauna and the winter chill.

One year on from its opening, Executive Chef David Vandenabeele has transformed Solander Dining and Bar’s autumn menu to reflect not only the seasons but the work of the restaurant’s namesake. The Belgian born chef is paying respect to Daniel Solander, a Swedish botanist who travelled to Australia with the First Fleet in the late 18th century.

A pioneer of the botanist art, the naturalist was integral to the early documentation of Australian native plants. Vandenabeele has embraced his findings and transformed them into a heavy, rich and soul warming menu, for when Sydney’s weather takes on that winter nip. 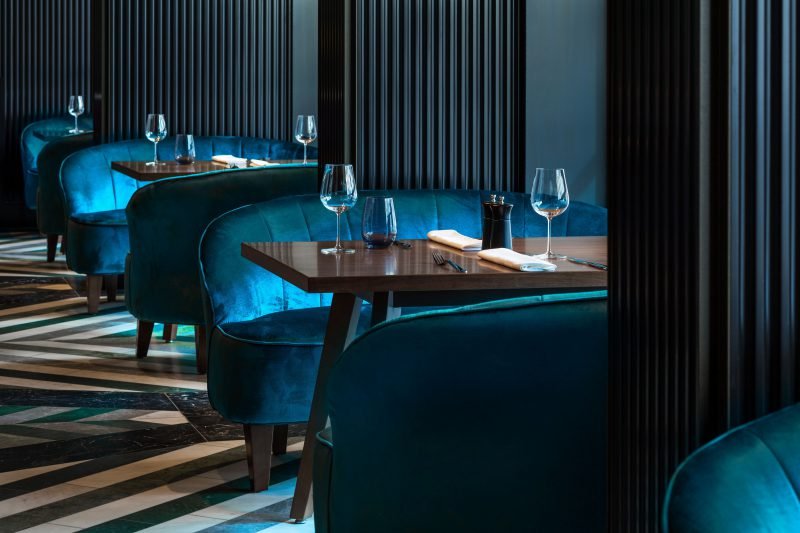 The dimly lit space sits at a crossroads between an underground, high-class speakeasy and your classic hotel bar (the restaurant is housed in the cosmopolitan West Hotel). Jade green, velvet couches adorn the floor and lanterns sit on each table. All that is missing from the scene is a charismatic jazz performer. Try cosy up on one of the intimate window tables for people watching alongside your vino or a happy hour Solander spritz ($12 from 5-7pm). 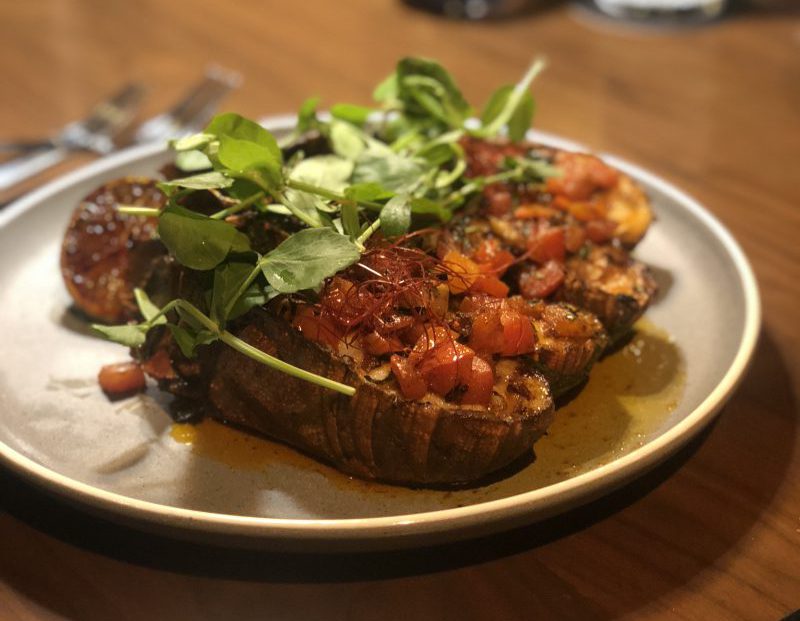 You can almost smell the butter waft off the very generously portioned charred Balmain bugs ($24). The succulent meat melts in the mouth, summoning dreams of beachside, bonfire barbecues. The diced bush tomatoes still have some tangy bite to them and the side of greens add a welcome, fresh relief from the buttery richness of the bugs.

The slow roasted tomato and capsicum terrine ($19) is served chilled and is refreshing to bite into. The salty olive jam and creamy goats cheese compliments the rich flavours of the tomato perfectly. The crunchy pecans add a whole new textural element which will keep you going back for more.

Another signature entree is the double boiled wallaby broth ($18), a very light, clear broth served with quail egg, enoki mushroom and goji berries. Back when Vandenabeele was working at The Langham in New York, he was known for his ‘chicken-tea’. Having pleased the sophisticated palates of his local New Yorkers, he decided to bring it back to Australia with a native twist. 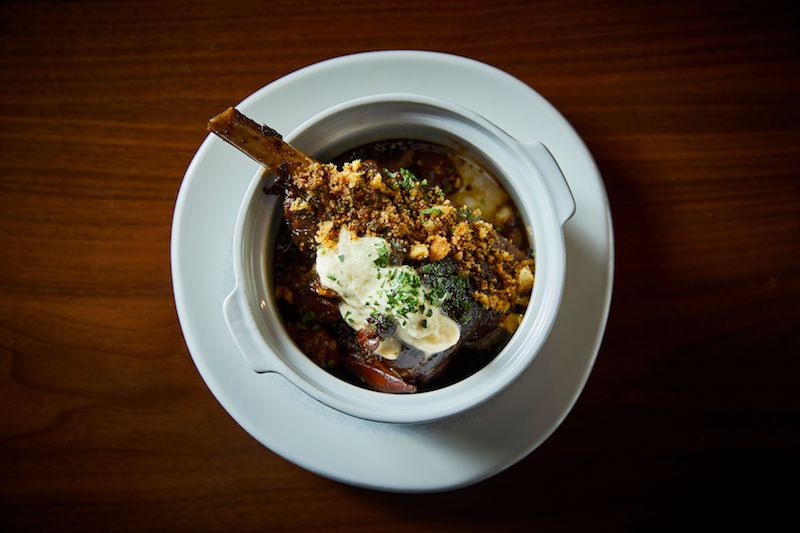 We recommend choosing one dish from the fauna menu and one from the flora. The braised wallaby shanks ($32) are served in a charming, country-style crockery pot. Swimming in luscious gravy, the sweet wallaby meat falls off the bone with ease, slow cooked to perfection and offering a gentle, gamey flavour.

The vegan, house made macadamia cream has a mild nutty flavour to it and was surprisingly very creamy. The only small letdown were the quondong berries. I’m not sure whether it was because the fruit was competing with the other rich flavours or not, but I couldn’t taste anything they gave off and was greeted instead with a strange, firm and spongy texture.

The potato gnocchi with wild mushrooms, charred radicchio and salt bush ($26) defied the conventional steaming mass of those pillowy dumplings we all know and love. Instead you’ll find a lush looking salad. Come again? Overflowing with onion, artichoke, capsicum, sun-dried tomato and crunchy pine nuts, it would have gotten an A+… had we ordered a salad. Nevertheless, the small amount of gnocchi that was served was cheesy, fluffy and full of flavour. 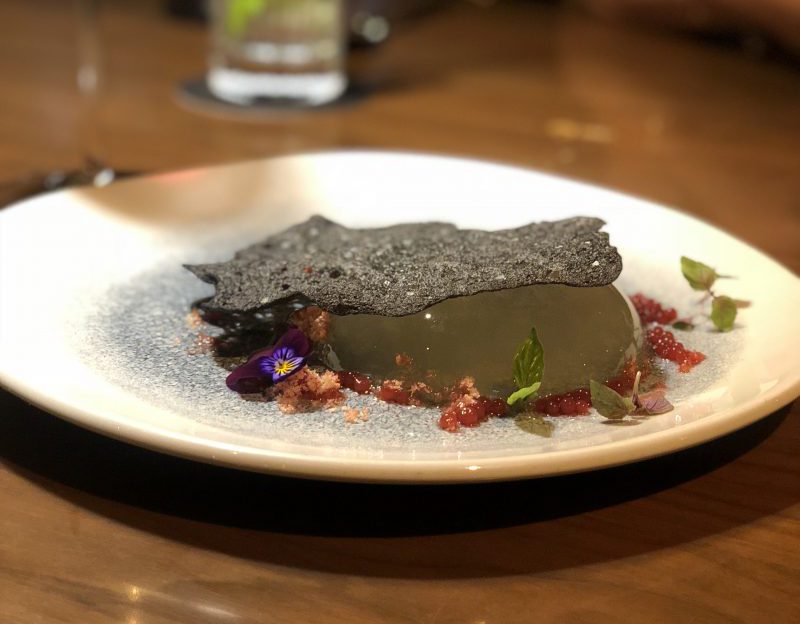 The watermelon drop cake ($20) was definitely a work of art – reminiscent of theJapanese tear drop cakes you’ve seen all over Instagram. But let’s clear one thing up – it is not a cake so don’t let the name fool you. It was a firm puddle of jelly with a strong, even slightly synthetic watermelon taste. The ‘pepper charcoal coral’ on top bewildered our taste buds – it tasted exactly like incredibly burnt pizza crust, with not a hint of sweet. The sloe gin pearls and micro basil however were a lovely touch.

The chocolate mousse ($16) was unfortunately a bit of a let down. There wasn’t anything wrong with it, but there wasn’t anything noteworthy about it either and you definitely can’t pinpoint the cinnamon and nutmeg in the crumble. It’ll hit the spot if you’re expecting a stock standard mousse from your local chicken shop. But we expected something a little more opulent.

While the desserts were anti-climatic, the entrees and mains are reason enough to make Solander your winter hub for sophisticated but cosy evening eats. Ditch after work dinner and drinks at Ryan’s Bar and stroll a bit further down for Sussex Street this winter to relish in some experimental dishes with a little botanical Aussie flair.