Do a Cageless Shark Dive at Sydney Sea Life Aquarium

Would you dive into a tank full of sharks? Do it for the gram!

Amongst other things we can thank Hollywood with movies like the cult classic Jaws for people’s fear of sharks. Even if you don’t suffer from galeophobia (the phobia of sharks even when you are safe on a boat, in an aquarium or on a beach), there’s something about sharks that makes most of us a bit nervous. They’re beautiful creatures to watch but would you dive into a tank and swim with them?

Now you can at the Sydney SEA LIFE Aquarium. Their Shark Dive Xtreme experience is your invitation to take the plunge and dive with grey nurse sharks in a cageless tank. This is one of the few experiences worldwide where you’re guaranteed an underwater encounter with sharks.

But not all sharks are equal on the human predator scale. The colony of Grey Nurse Sharks at Sydney Aquarium might look scary but they’re described as “labradors of the sea” and are completely harmless to divers. They range in size from 2.5 to 3.2 metres and are quite relaxing to watch. This may be your last chance to see this impressive creatures. Sadly Grey Nurse sharks have become among the most critically endangered of all the shark species, largely due to over fishing. It’s estimated that there are only 2,500 Grey Nurse Sharks left on the planet, around 1,500 of those residing on Australia’s east coast.

Along with the five Grey Nurse sharks, several Wobbegongs, White tip reef sharks, and Port Jackson sharks are also in the tank during your 30 minute dive. Two huge stingrays are also in there including one that’s thought to be the largest smooth ray in human care in the world. 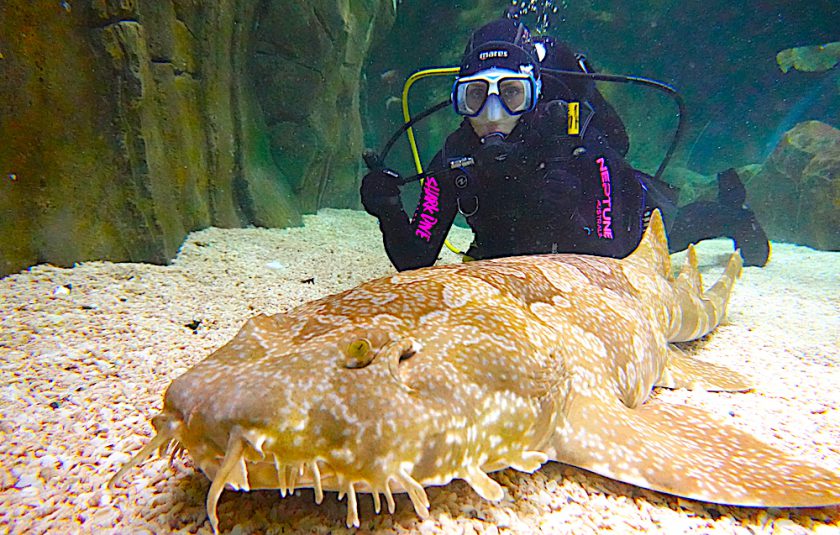 The full Shark Dive Xtreme experience goes for 2.5 hours and no diving experience is needed. They provide all of the equipment and training on the day. Dives run up to 4 times per day with a maximum of 5 people per dive and are designed for people aged 14 years and above. Prices start from $239 during the week, $299 on the weekend.

Would you do a cageless dive with sharks? Now you can at @sealifesydneyaquarium ! ? Tag someone who’d do this! #sharkdivextreme #sydneyaquarium @msdarlinghurst