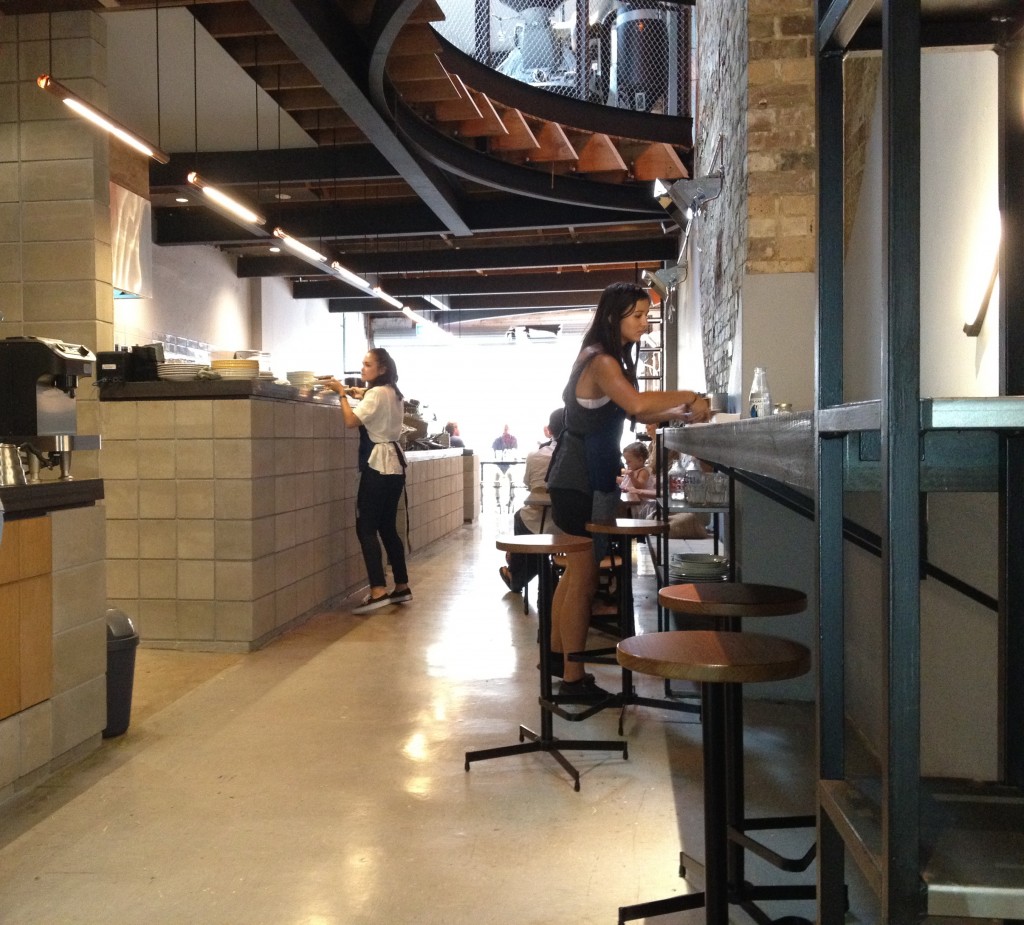 Two slices of toasted bread filled with layers of corned beef or pastrami, sauerkraut, Swiss cheese and Thousand Island dressing is said to be the original combo for the famous Rueben sandwich. Who invented the Rueben? This is up for debate.
Some sources claim Reuben Kulakofsky a Lithuanian-born grocer from Omaha, Nebraka was the inventor. Kulakofsky belonged to a weekly poker group whose members enjoyed making their own sandwiches. One of the players, Charles Schimmel, owner of the Blackstone Hotel in added the Reuben Sandwich to the hotel lunch menu and it gained local fame. Word of this incredible sandwich soon spread across the country.
Others have argued the Reuben’s creator was Arnold Reuben, the German owner of the once-famous Reuben’s Delicatessen in New York. According to an interview with renowned restaurant critic Craig Claiborne it was Arnold who invented the ‘Rueben Special’ in 1914.
This is a popular belief although it has been disputed that Arnold wasn’t the originator, rather his chef Alfred Sheuing. It’s claimed Alfred made it for Reuben’s son Arnold Junior in the 1930s because he ate too many hamburgers. Instead, he got the best damn sandwich of his life.
Over the years there have been many versions of the Reuben sandwich. We even have a café named after the famous creation right here in Sydney. It’s called Reuben Hills. You’ll find it on Albion St, in the heart of the 2010 zip code. This café does two things well, coffee and a Reuben sandwich. The interior is sleek and minimal with polished concrete floors and exposed timber beams. Upstairs they roast their own coffee filling the New York feeling space with beautiful aromas. 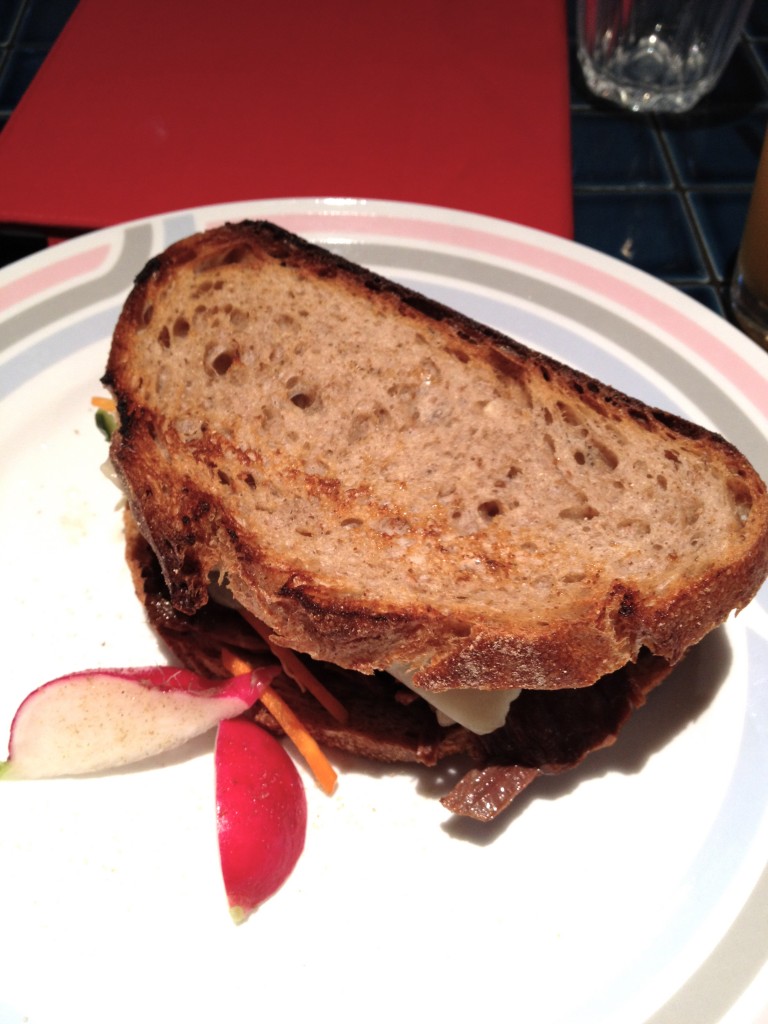 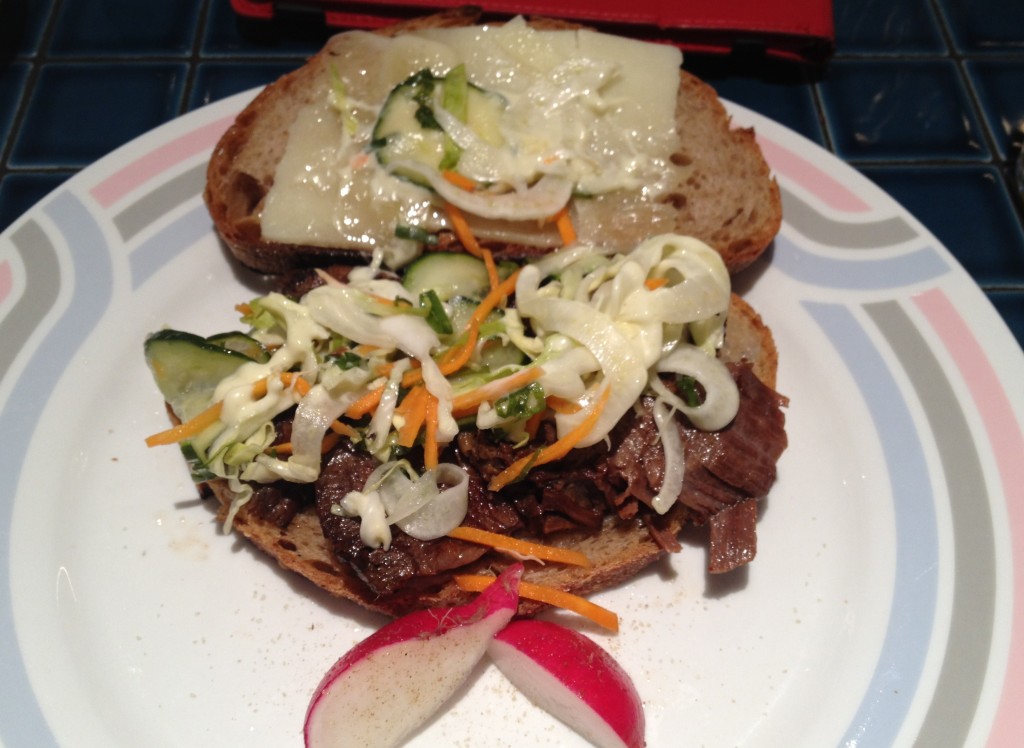 The menu is simple with a few meals listed for breakfast and lunch. Don’t ask to make changes to the menu, they probably wont’ oblidge. You also can’t get anything else on the menu take-away except the Rueben and the Baleada, a wheat flour tortilla filled with cheese, egg and meat ($8).
I couldn’t tell you what anything else on the menu is like because every time I go there I can’t go past the Rueben. Is it a traditional Rueben? No. It’s a new version but still damn good, if not better.
For $15 you’ll get a plate with approximately 15 centimeters of toasted bread filled with a wagyu salt Brisket, pickled slaw, melted manchego cheese and horseradish cream. Be nice and you’ll get some fresh radishes on the side. Don’t drink anything while you eat, wait until you finish so you can enjoy the flavours. Then wash it down with a just salted caramel shake or try their crafty coffee.
Hungry? Here’s what to do:
Rueben Hills
61 Albion St Surry Hills
Open 7 days 7am – 4 pm.
http://reubenhills.com.au/