Parida Bondi is your soon to be new favourite Bondi hotspot.

Nestled on the far North side of Campbell Parade, overlooking the busy street that lines the famous Bondi Beach is Parida Bondi. Breakfast and lunch sittings have already garnered a cult following, known for their scrumptious Parida Benedict and excellent coffee. But such an idyllic spot on Campbell Parade deserves a dinner menu as well. Bondi asked, Parida delivered. 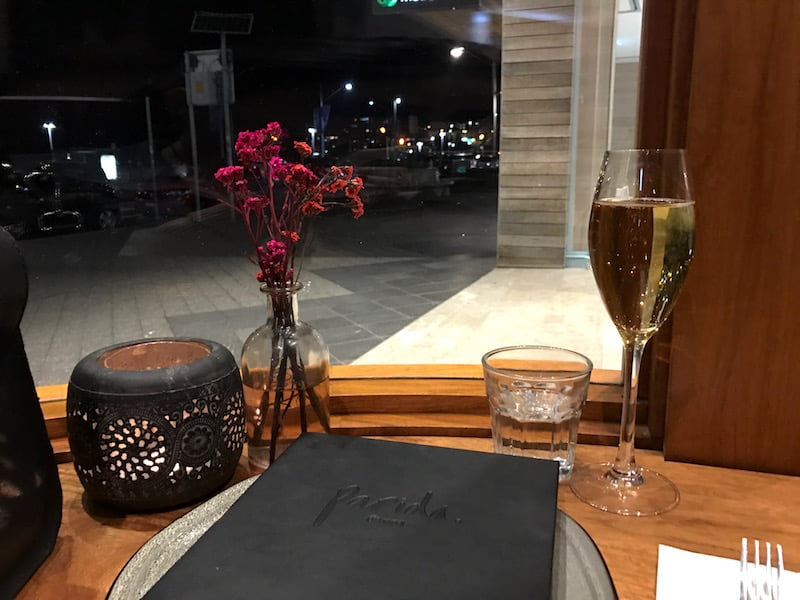 We were greeted incredibly enthusiastically once we arrived at the cafe. Seated in a cosy little corner facing Campbell Parade, we ordered up a glass of Woodstock “Twiggy” sparkling ($9). Soft on the palate, it made for an opulent start to an evening of people watching from our snug little corner.

The staff were super personable and professional in an easy-going way. You can simultaneously discuss that terrible Tinder date you had last weekend with them whilst having an enlightened conservation over the wine menu. And speaking of wine, they know it well. Our lovely waitress took it upon herself to select a bottle of white for our evening meal. We went with the Irvine “Spring Hill”, a riesling that was quite mild and tame enough to pair with our upcoming eclectic food choice. 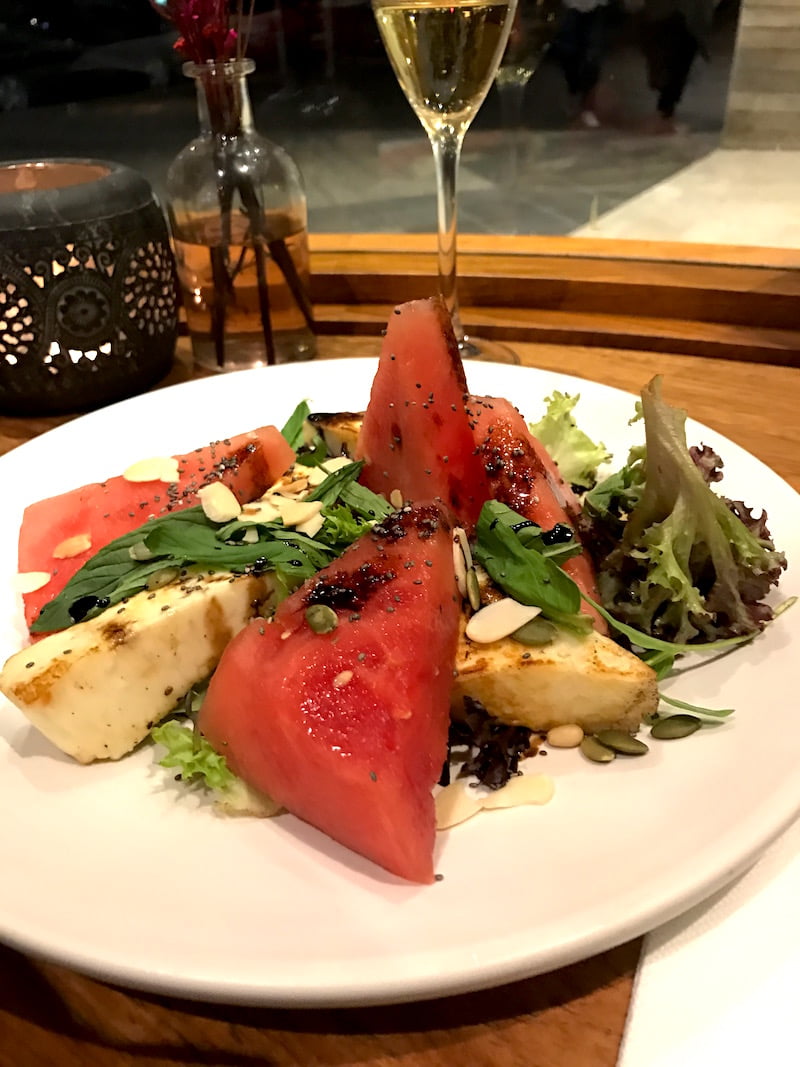 We start light and order the very trendy Haloumi and Watermelon ($14) served with almonds and drizzled with balsamic vinegar. Can it get much more Bondi Beach than that? The sweet, refreshing taste of the watermelon is really brought out through the addition of the balsamic and the almonds added a good crunch. The cheese however wasn’t quite up to scratch. It was cold and rubbery where we looked for warm and slightly crispy on the outside, a nice melt on the inside. However it had that haloumi flavour and it was an invigorating start to our meal. 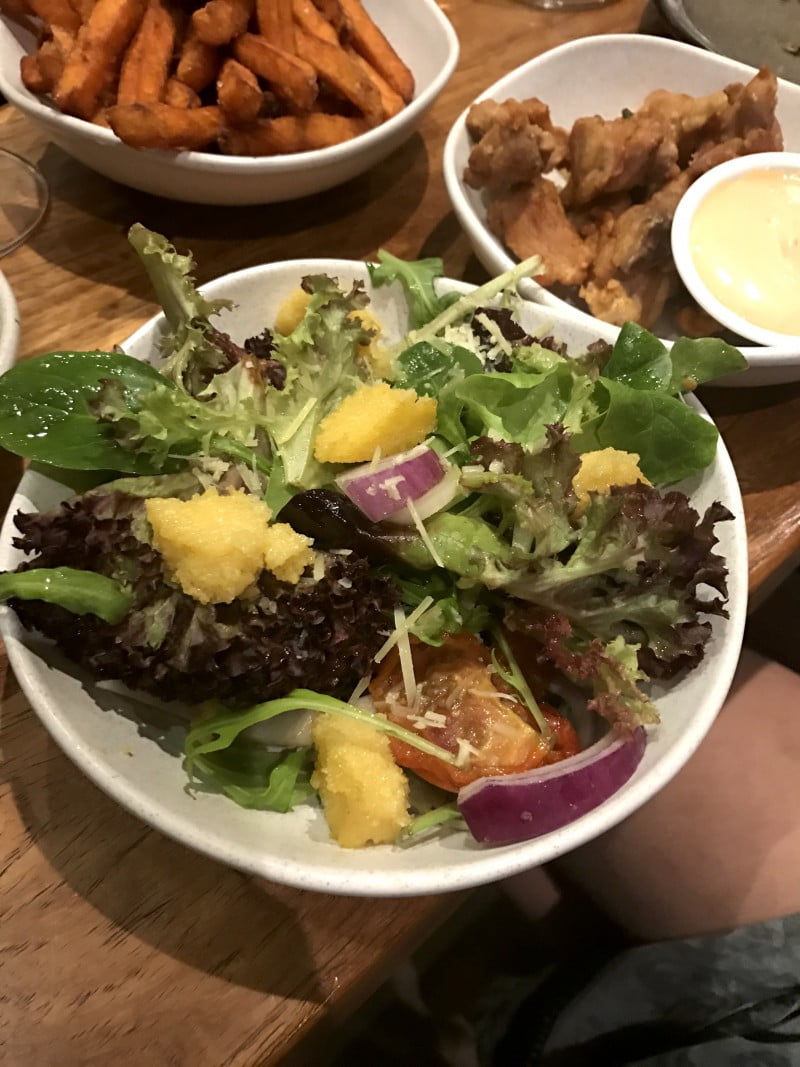 We were in Bondi after all so obviously had to order up some fresh greens on the side. For our health. We opted for the simple sounding Parida Salad ($10). And simple is right. It is essentially a garden salad with the addition of “crispy” polenta and semi-dried tomato. I put crispy in adverted commas as the polenta we received was certainly not crispy, just small bites of almost soggy polenta. In saying that, it added a nice textural element and delicate flavour to the salad. The sun dried tomatoes were hearty and juicy and contributed to most of the flavour. 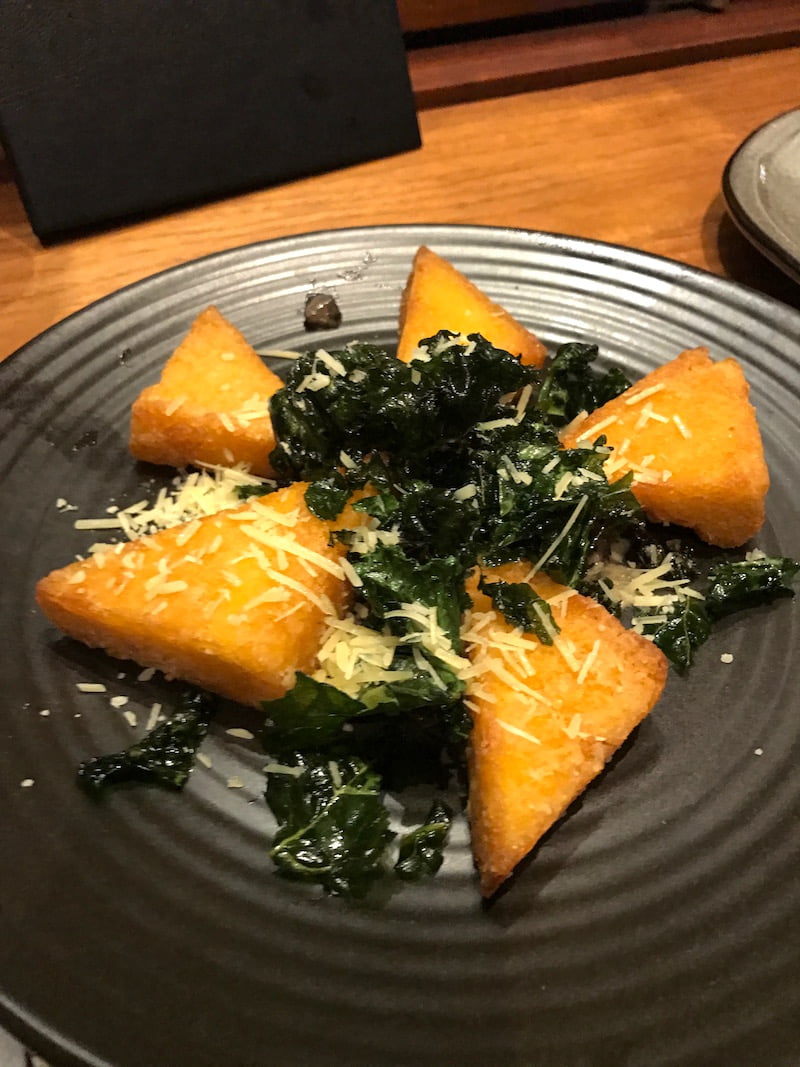 It looked like there was a polenta theme going on at Parida Bondi so next up we tried the polenta chips served on a bed of truffle mushroom with crispy kale on top ($14). We enjoyed the nutty flavour the large portioned triangular polenta chips imparted. 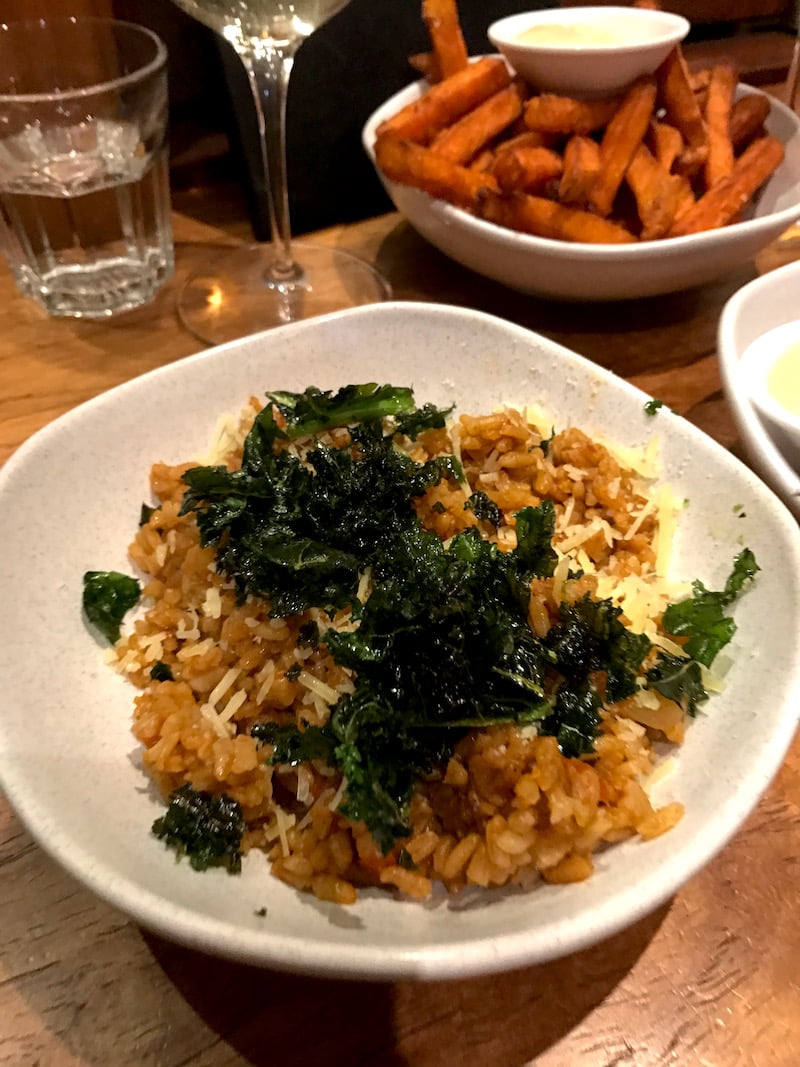 My date for the evening was vegetarian so we opted to vege-tise our main. While the Paella ($24) is usually served with crispy baby calamari, we had it simply vegetarian style (though keep in mind it is cooked in a chicken broth). The first thing that bemused us was the size of the paella we received. It was served in the same sized bowl as our side of sweet potato fries. We were also a little stumped at the price of this entreé sized paella – $24. Nonetheless, the paella proved really tasty and moorish. Topped with crispy kale, it was still rich without that side of protein. Size, however, was a disappointment relative to the price. 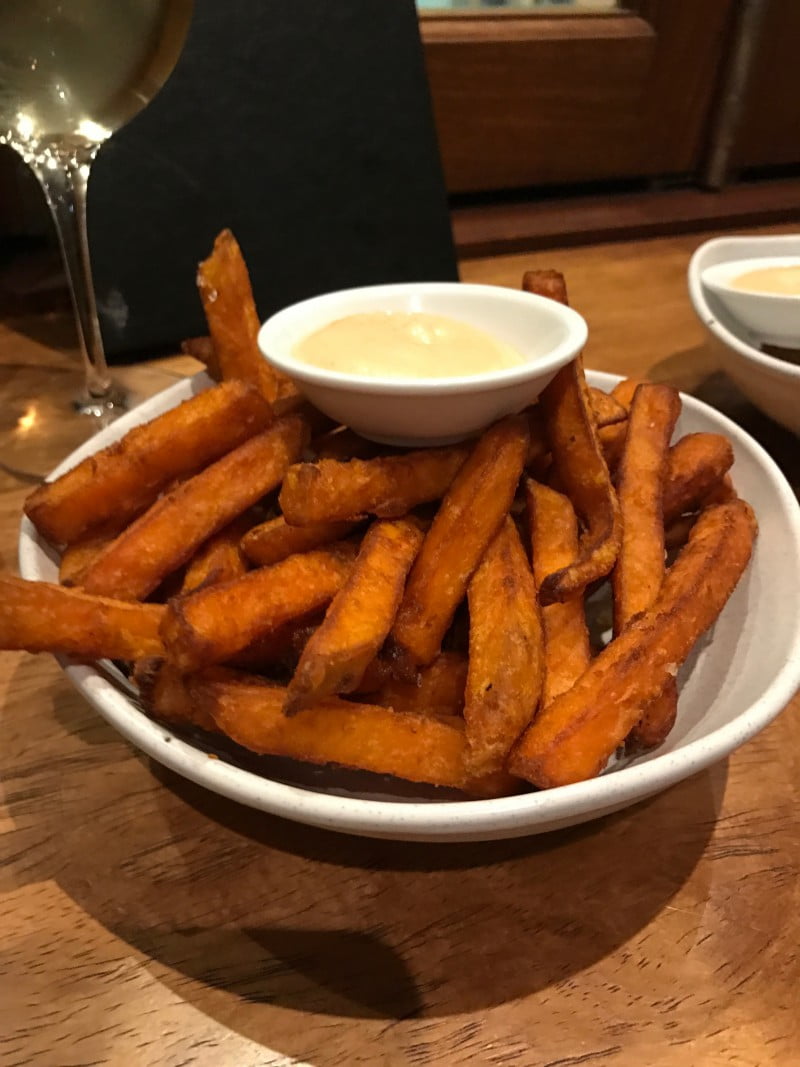 While it may seem like the dull and repetitive choice, I am forever on the lookout for the worlds best sweet potato fries ($8) and in order to continue my tiresome work, I can’t say no to them when I see them on a menu. And it seems I made a breakthrough. These chips were (pretty much) flawless. A crispy, crunchy outside, fluffy and sweet on the inside. There’s a nice kick from the creamy, slightly spicy chipotle mayo too. Perfectly cooked, perfectly seasoned, these sweet potato fries are in my top 5. 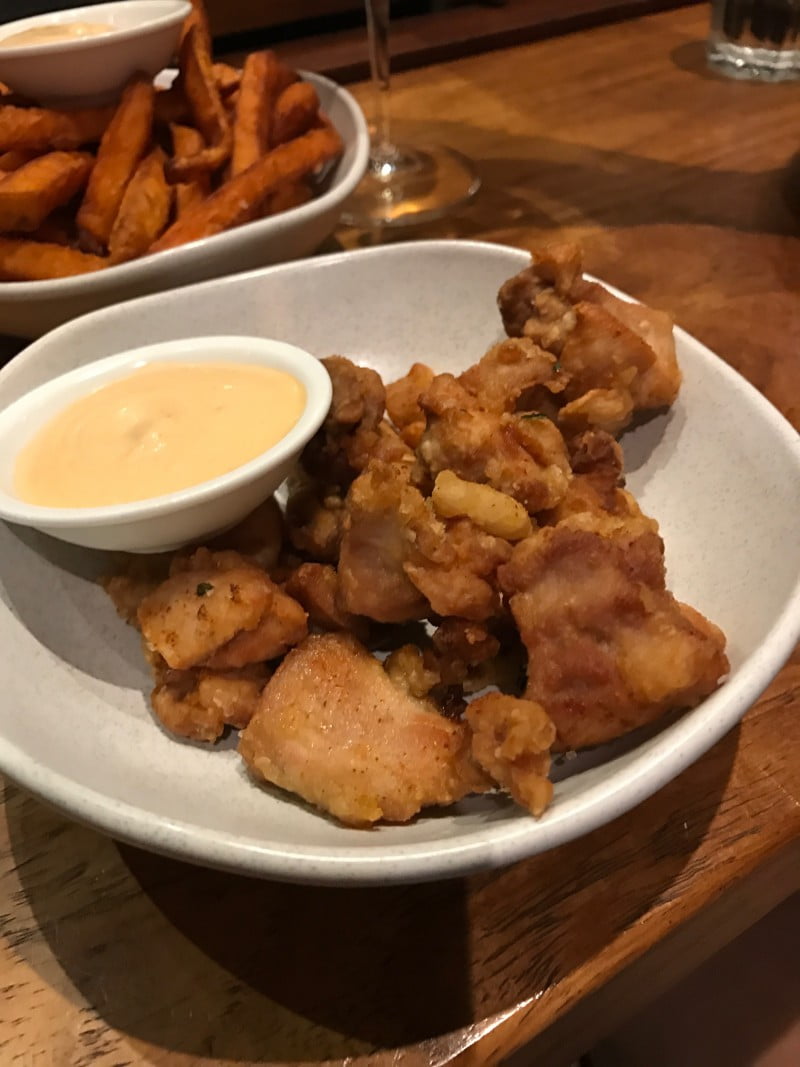 Vegetarian date or not, a little bit of meat was in order. Whilst the menu said Popcorn Chicken ($14), I felt a more appropriate name would be chunky chicken nuggets. The coating didn’t really have that classic crispy texture we all know and love in popcorn chicken. Whilst the chicken itself was juicy and succulent, I can’t say I enjoyed the chipolte aioli (again) served alongside it. It was too rich and called for something a bit lighter.

We definitely had room in our tummies for some dessert come the end of the evening. However it was an anti-climatic conclusion as our waiter informed us that, oddly, the dessert was not available that Saturday night. You are of course in arms reach to some of the best gelato in Sydney so not an absolute tragedy.

Parida Bondi has collected their crowd of supporters for more than one reason – offering an incredible location, great service and tasty food. In terms of value for money we weren’t entirely sold. Getting on the banquet menu for dinner would be the far more economical choice. Staring at $35 per person, you get six small dishes to share. Add a glass of bubbles and you’ve got the perfect evening out at the beach.