Sydney has no shortage of restaurants owned by world-class chefs and we’re about to add another to the list. Celebrated Irish chef Clare Smyth is set to open her first restaurant outside of the United Kingdom in Sydney’s much-loved lifestyle destination, Crown Sydney. Oncore by Clare Smyth will offer a dining experience like no other boasting harbour views from level 26.

Smyth has just landed three Michelin stars in the 2021 Michelin Guide for her restaurant Core by Clare Smyth in London. She’s an inspiration to women around the globe after becoming the first and only British female to achieve this accolade in the UK. Hospitality heavyweight Michael Stoddart has joined the Oncore by Clare Smyth team as Restaurant Manager. Stoddart found his passion for hospitality whilst working in London’s SoHo House and more recently as Manager at Sydney’s Bennelong.

The new venue will pay homage to the original restaurant’s roots while taking on its own identity as Oncore. As explained by Smyth, “I named my first restaurant ‘Core’ as it is from the heart, a seed of something new, and has strong ties to nature. As the new restaurant will build upon the success of Core, it seems fitting to call it ‘Oncore’ — a play on the word ‘encore’ meaning a follow-on performance demanded by the audience.”

The 68-seater restaurant provides sweeping views of the city’s harbour including the Sydney Harbour Bridge and Sydney Opera House. If you’re after the best seat in the house, look no further than the Chef’s Table, a position directly in from of the kitchen giving you front row seats to watch the skilled culinary team at work. 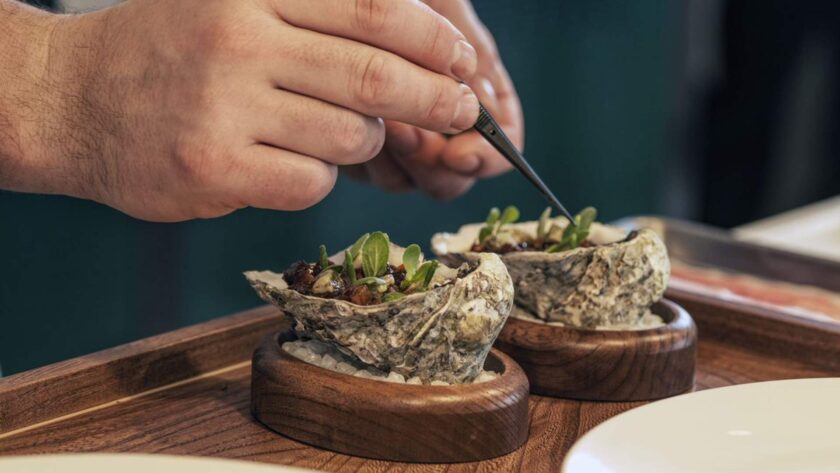 The menu will offer an Australian twist to the gastronomical experience at Core by Clare Smyth. As usual, there will be a strong emphasis on celebrating sustainable food and local producers. The most celebrated dish at Core will be featured on the menu, the Potato and Row with slow-cooked Charlotte potato from the Southern Highlands, smoked trout, herring roe and beurre blanc. This dish pays homage to Smyth’s farming childhood in Northern Island. There will also be new dishes to serve Sydney tastes, drawing inspiration from our beautiful harbour. The Beef and Oyster features oysters from Wapengo and Wagonga estuaries from the South Coast of NSW and Shiro Kin Fullblood Wagyu Beef sourced from the New England, Riverina and Hunter Valley regions.

For wine lovers, you’ll be able to explore a 3,000+ menu of bottles housed in the restaurant’s cellar. The list celebrates the west of Australia, as well as wines from Bordeaux, Burgundy, and an extensive variety from around the globe. The cocktail bar overlooks the harbour waters below serving a fun and innovative menu of cocktails.

Oncore by Clare Smyth will join the stellar lineup of restaurants at Crown Sydney, from the world-famous Nobu, to a’Mare by Alessandro Pavoni and Woodcut from Sydney duo Ross and Sunny Lusted.

Oncore by Clare Smyth is set to open on November 18, 2021. Find out more here