The New Britannia comes with a brand new menu!

If you like the sound of hand-stretched New York style pizza, a liquor delivery service, and a foosball table then welcome to nirvana, and The New Britannia.
Nestled on historical Cleveland Street in the heart of Chippendale, The New Britannia has recently been given a rejuvenating makeover. Built in 1879 by William Chippendale himself, new owners Scott Davis, Adam Celestino, and Tony Francis have rebranded the venue to start a fresh chapter in the buildings extensive history. 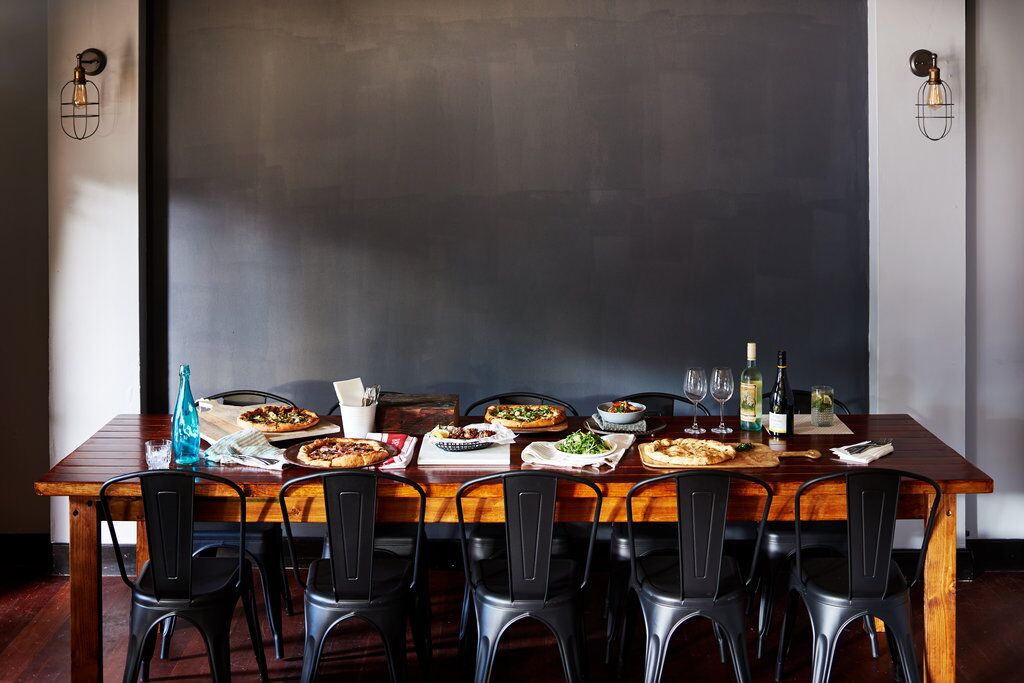 Before we get to all the new bells and whistles, there’s some colourful characters and events that surround The New Britannia which may be of interest to you. Along with a series of ghost stories that have been passed on between patrons, the venue has ties to Sydney’s gangland history. Former ‘crooked’ cop Roger Rogerson sunk a beer at The New Britannia before shooting Sydney underworld figure Warren Lanfranchi in Dangar Place – a story you might be familiar with thanks to the 90’s true-crime drama ‘Blue Murder’. 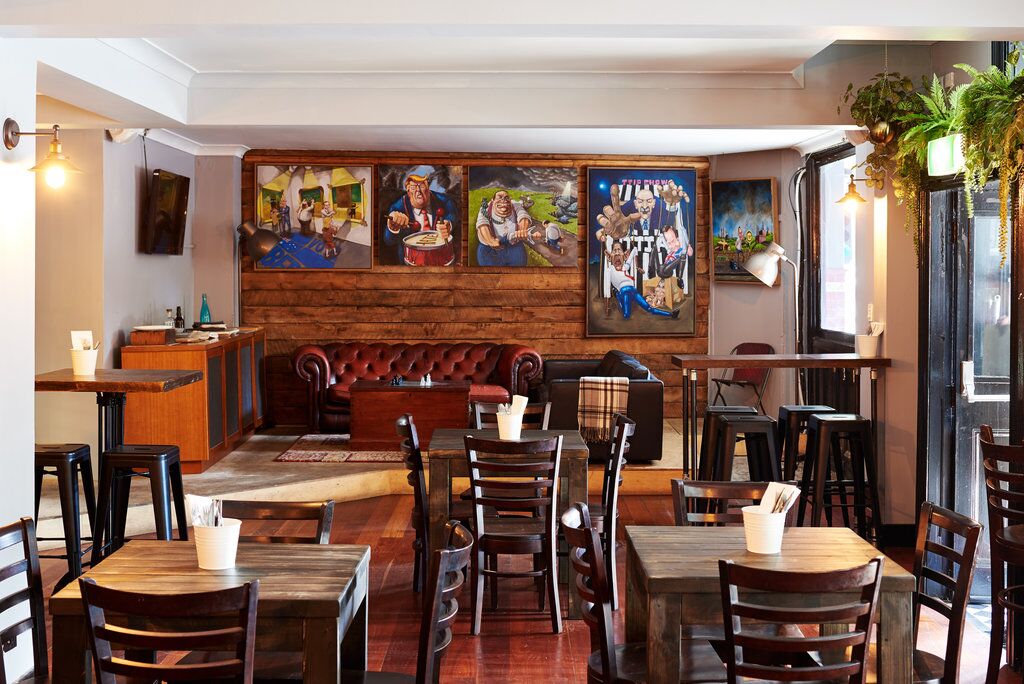 Now that we’ve covered some of backstory, it’s time to move into the present because we’ve got a lot to cover. Preserving the casual and comfortable tone of the building, industrial light fixtures line the grey-tone walls and complement the stunning aged-timber bartop. The venue makes clever use of the space with a raised platform which holds a set of worn-in leather couches for maximum comfort and a tv for sports screenings. Also available is a large dining table for 6+ people, counter-height and smaller table settings so groups have ample seating to choose from.
Additionally The New Britannia has introduced a pop-up gallery display on one side of the venue to reflect Chippendale as a creative precinct. The art of local and up-and-coming artists will be rotated, as well as a free opening night celebration for each artist to help launch their work. 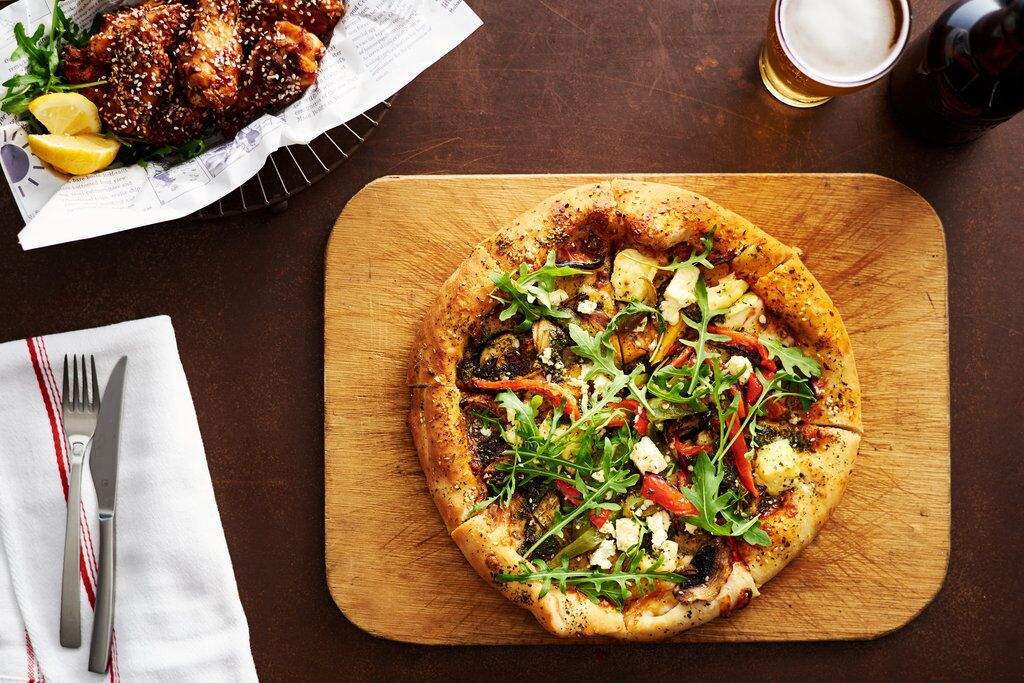 In terms of taste-value, The New Britannia is checking all the right boxes. Angry Tony’s Pizza has been introduced to deck out the menu and is serving up hand-stretched rounds of  heaven measuring up to 22 inches – that’s over half a metre of pizza! The pizza is fragrant, packed full of flavour and crunchy yet doughy in all the right places, not to mention you can order anything off the menu for $20 or under.
Pizzas like the ‘Tony Pepperoni’ ($18), ‘Pleased To Meat You’ ($19), and ‘Prawn Show’ ($19) make the menu a mix between classic and new combinations.
What about something for the vegan, vegetarian, and coeliac crowd? Don’t worry, Angry Tony doesn’t discriminate. Presenting ‘The A.G’ ($18), topped with roasted pumpkin, vegan cheese, rocket and rosemary oil’, and the ‘Vego Deluxe’ ($18), a combination of roasted eggplant, capsicum, mushroom, feta and rocket. All pizzas can be made on a gluten-friendly amaranth and quinoa base, as well as their selection of pastas which are made gluten-free to order.
If you feel like feasting there’s also generous selection of starters, sides, and desserts to choose from. ‘Angry Birds’ ($10) aka hand rubbed chicken wings, ‘Vegan Balls’ ($12), Apple Pie Pizza ($8) and Ice Cream Sandwiches ($6) will see that you’re well-fed and wedged into your chair. 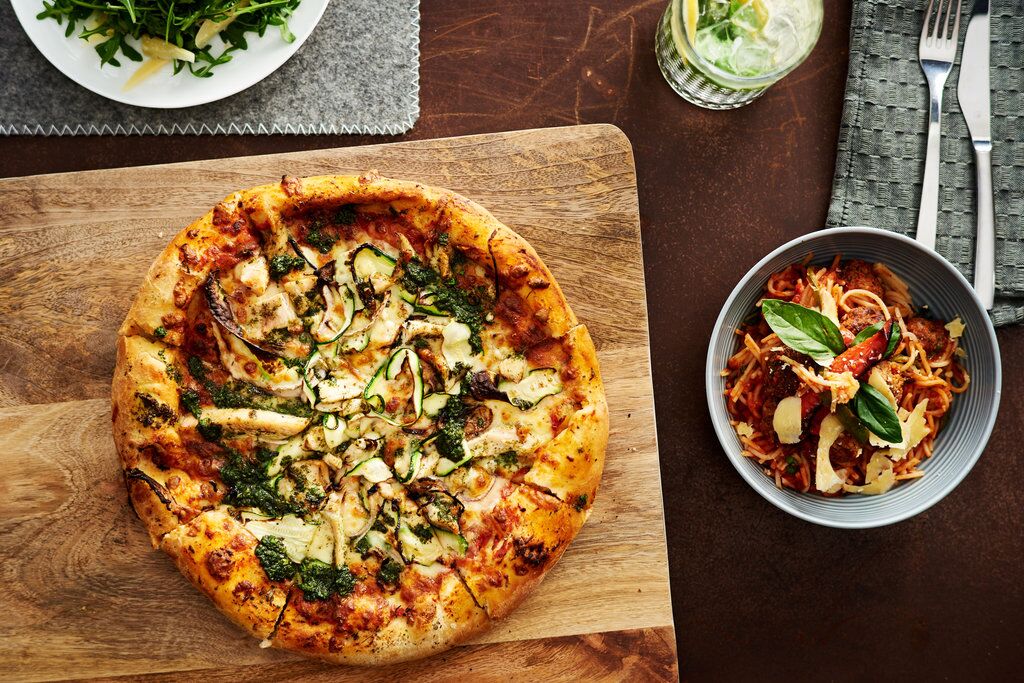 Once you’re on a first name basis with Angry Tony, you can even bring this pizza party (and a bottle of vino) home because The New Britannia has introduced a food and liquor delivery service. They deliver within a 3km radius and until 10pm Tuesday through Sunday, with food only deliveries available until midnight – that’s amore!