Step into the underground playground of Nel Restaurant where English dining is flipped on it’s head.

Tucked away downstairs off Wentworth Street is a modern, dimly-lit and intimate dining room. With exposed brick walls and an open kitchen, your curiosity is peaked from the minute you enter Nel Restaurant.
Their seasonal eight course tasting menu ($118 per person) changes every six weeks and can be accompanied by matching wines ($90 per person). Without the need to inspect a menu, you can sit back, relax and enjoy a glass of wine from their wide variety of international and local drops.
Owner and head chef Nelly Robinson has a number of accolades under his belt including stints at several Michelin-starred restaurants in the UK. He moved to Australia and opened his own restaurant at the age of 29. He even cooked at Queen Elizabeth II’s 90th birthday in Canberra. So you could say his food is fit for a Queen! 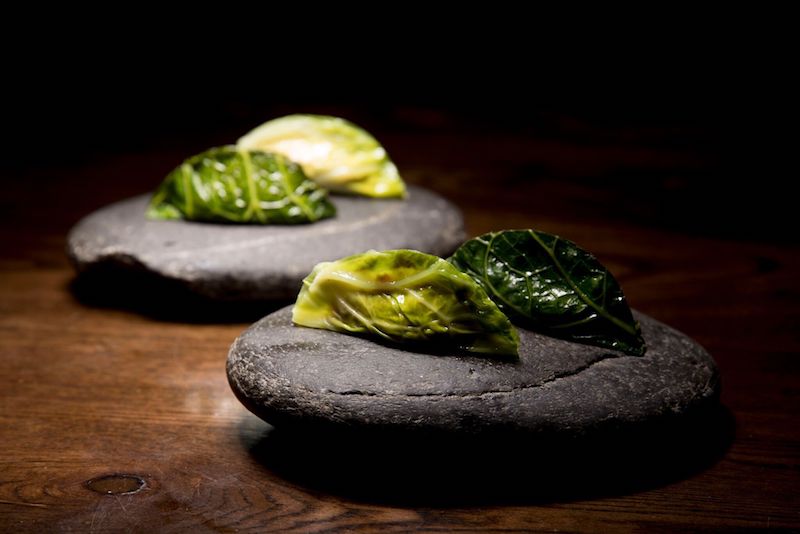 The dishes on the tasting menu have distinct roots in classical English cooking. We start with a modern take on ‘Bubble and Squeak’. Nel’s version is a salty blanched cabbage leaf, filled with pancetta, cream cheese, carrot, pickled cauliflower and cauliflower puree. It’s bite size and full of flavour. Devilled whiting is next with white fish dusted with a spice mix and served on a skewer atop a smoking wooden board. This clever visual feast enhances the smokey flavour of the spice mix on the crispy fish.
Nel’s sausage roll is a memorable snack with strong fennel flavours covered in a flaky nest of pastry. Don’t let the name of dishes fool you. Nothing is as simple as it’s stated on the menu. Even Nel’s leek soup has a twist. Cold green leek soup is served in what looks like a double fish bowl and smothers small cylinders of potato. In the centre of the bowl stands mustard ice cream. Intrigued aren’t you?
A firm favourite of the night is the fish and chips. Perfectly cooked fish is topped with crunchy fish skin over a bed of greens and peas. 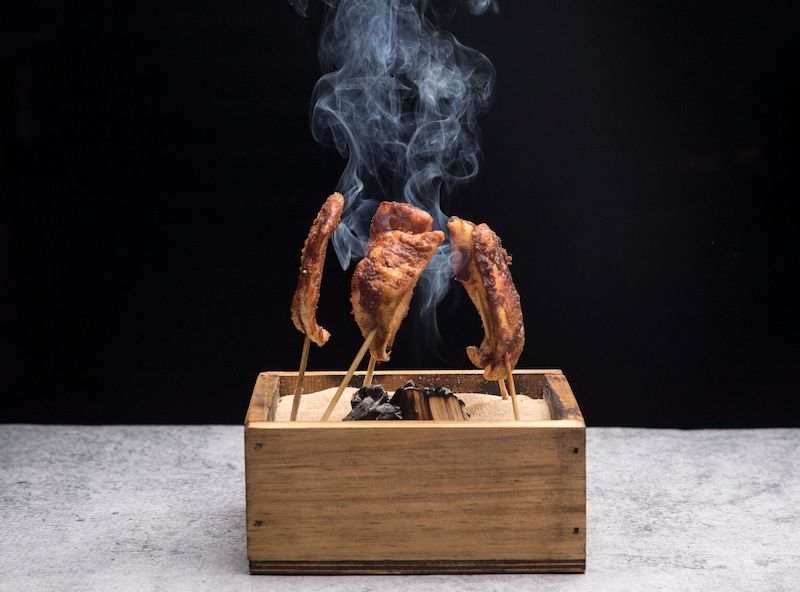 Up next, lamb korma as you have never seen it! The lamb is actually a tartar smothered in a tasty, zingy korma sauce.
For the final savoury dish, Nel’s Restraurant serves its take on a Sunday roast. The medium rare charcoal flavoured meat is served with charred broccoli, swede ribbons and a creamy sauce to balance the dish. Quite unlike the traditional carb-heavy English roast we are used to this is delicious but I can’t help miss the potatoes.
A definite way to a diner’s hearts is having not one but two desserts. After a delicious English cheese board (optional extra at $35) the first dessert served is trifle and the presentation is absolutely stunning. Tangy dehydrated strawberries, light springy sponge cake, fresh gooseberries and a beautiful fruity sorbet combines on the palette. It’s the perfect balance of smooth, creamy and zesty.
In contrast the rice pudding is a very earthy dish, with shards of wafers on top.
It’s not exactly what comes to mind when you think of British fare. But if you want to awaken your taste buds to a whole new dimension of seasonal English inspired cuisine, Nel Restaurant will be sure to delight.
Nel Restaurant
75 Wentworth Avenue, Sydney, NSW, 2000
(02) 9212 2206
Open Tues – Thurs: 6pm – Late, Fri: 12pm – 3.00pm | 5:15pm – Late, Saturday: 5:15pm – Late
http://nelrestaurant.com.au/