An Epic Japanese Magic Bar Is Popping Up In The CBD

Pull up a seat and prepare to be wowed at Maho Magic Bar, where Saké is served with an awe-inspiring sleight of hand.

This January, a spectacular magic show heralding direct from Japan is set to bring a slice of Tokyo’s crazy cool, to the heart of Darling Harbour’s Tumbalong Park.

Enjoy your libation of choice in one of six performance areas, and settle in for an interactive drinking and dining experience unlike any other. Marking the start of Sydney Festival, Maho Magic Bar’s lineup features six renowned magicians, each offering a close-up look at some of the world’s best magic tricks from the comfort of your table. 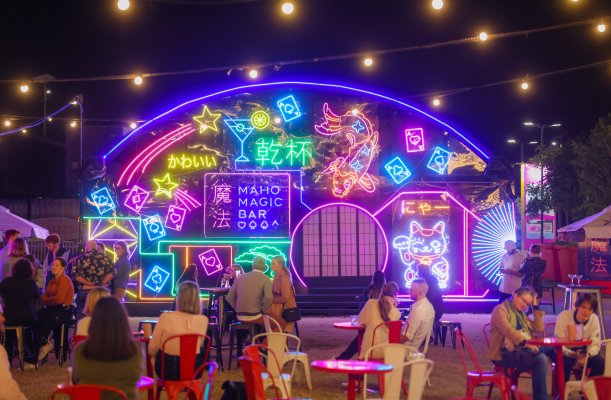 First up on the sleight-of-hand super troupe is Shirayuri, a student of legendary Japanese magician, Shoot Ogawa.  Shirayuri’s tricks have crossed oceans including some time in Hollywood at The Magic Castle as well as Las Vegas. Shirayuri is a smooth operator, with hipster flair aplenty.

Crowd favourite Kaori Kitazawa will deliver brand new super kawaii illusions, tearing up the rulebook in a profession traditionally ruled by men. Sarito is on a mind-bending mission to become the craziest magician in Japan, this daredevil boasts a high-risk repertoire, weaving needles, gaffa tape, detergent, and… stuffed animals, into a jaw-dropping performance.

Catch international star of America’s Got Talent, Jonio – one of Japan’s most awarded magicians as he turns everything he touches to gold – even his beard – and finally Santa the Toy Magician, one of the most unique magicians from Tokyo and praised by magicians from all over the world will be wowing guests over three fun-filled weeks apart of Sydney Festival’s epic lineup for 2023.

Maho Magic Bar will be popping up for a good time (not a long time) at Darling Harbour’s Tumbalong Park from 6 – 29 January. Secure your tickets here.