Live At The Cortile with Sydney Symphony Orchestra

From the second I set foot in the InterContinental’s marbled lobby, I felt like a princess. The Cortile Bar looked like a beautiful ballroom, elegant and sophisticated and unlike anywhere I’ve been in my relatively young and unsophisticated life. 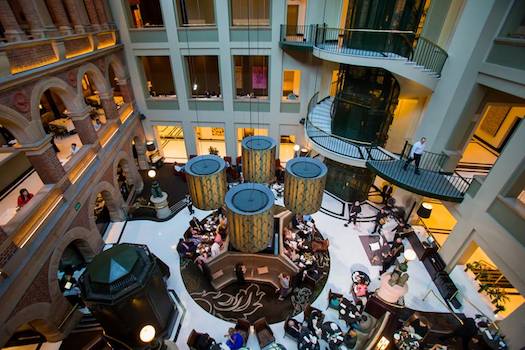 A gorgeous waiter handed me a Maker’s Mark fat-washed bourbon Old-Fashioned with something sticking out of the glass. That something turned out to be Canadian maple-syrup-infused bacon. Win!
The cocktail was strong but the bourbon-soaked bacon left a great after taste while I stared at my glass perplexed as to how they managed to freeze a glacé cherry in the centre of a perfectly round cube. 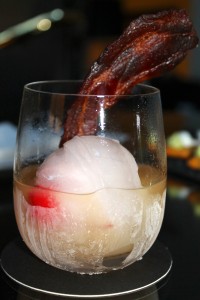 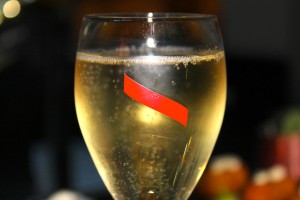 I was at launch a new partnership between the Sydney Symphony Orchestra and the InterContinental Hotel, the first of a series of three events. At each event, chefs Jorge and Thomas work with the brass players from the SSO to match the music to the menu.
The first round of finger foods was exquisite. The Scotch egg with caviar was runny and delicious, the duck a l’Orange was tender, flavoursome and reminded me of a lemon tart, and the Bouchée à la Reine wasn’t even spoiled when the trumpets suddenly blasted and scared the bejesus out of me. 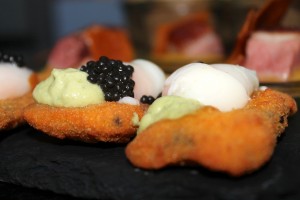 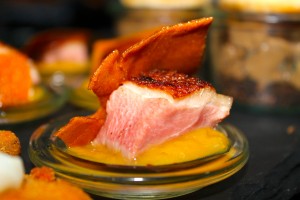 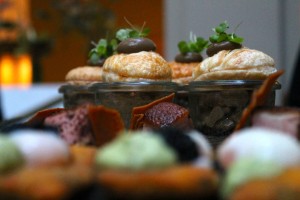 The music for the first course was highly spirited, playful, colourful and high-energy. The majestic strains of a well-known part of Handel’s Water Music Suite were followed by a rousing rendition of the CanCan from Orpheus. 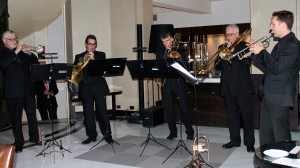 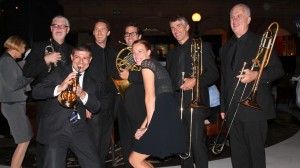 Second course totally exceeded my expectations- the Ceviche de Pescado with lime was spicy, the pork belly with plantains and avocado was tender and juicy and the Jalea Peruana was perfect. 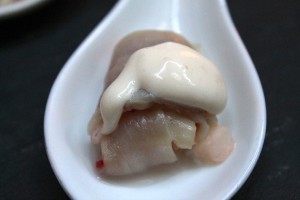 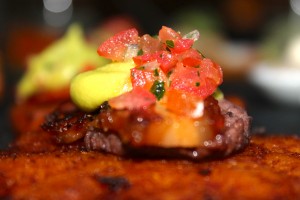 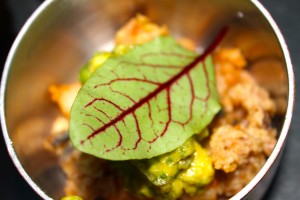 But the crème de le crème, in my opinion, was the Croquetas de Pollo, which were good enough to make a Spanish chef blush. I like to consider myself quite the croquette aficionado, and these were possibly the best I’ve ever had. They were warm, crispy, soft, cheesy, smooth, flavoursome and aromatic  – a world of contradictions wrapped in a delicious crunchy crust that wasn’t nearly big enough for my needs. I could have eaten several. Dozen. 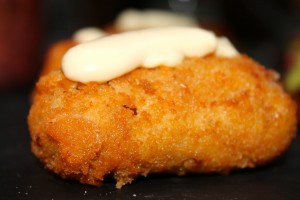 The music, again, perfectly matched the food. ‘America’ from West Side Story had me head-bopping along while The Beatle’s ‘Penny Lane’ transported everyone back to 1967, and then we were brought back with a hilarious interpretation of ‘I’m a Clown’. Being serenaded while chowing down kind of makes you feel like a king.
It’s an unlikely but effective profession partnership between cook and musician. The music is designed specifically to help you digest and enjoy the food, down to the order in which the courses are served. I’m told that the evening was also an opportunity for the SSO to play in a more casual setting – although I didn’t find anything about the evening remotely casual.
Details for the next event are shrouded in secrecy, but it’s going to be at the InterContinental and it’s going to be something you don’t want to miss!
Live at the Cortile with the SSO is both in demand and intimate, so make sure you book early to avoid disappointment. Premium seats with cocktails and canapés are $100 per couple, while premium seats with cocktails are only $50 per couple. Additional events will be held in April, June and August so watch this space!
For more info following the Facebook page: www.facebook.com/InterContinentalSydney