Situated at the top of busy Fitzroy Street in Surry Hills, Hoost restaurant lies in close cahoots with some of us Sydney-siders favourite foodie hangouts. The Beresford, 4Fourteen, The Dolphin Hotel, these are just some of the many neighbours Hoost is nestled amongst.
Step into this minimalist restaurant and feel enveloped by it’s sense of warmth and intimacy. The tiny restaurant seats just 20 people, with the eateries kitchen extending well out into the dining area. It’s a cosy affair, but the intimate feel is what chef and owner Samantha Pok strives for. “I designed [the restaurant] that way so I could focus on the quality of the food going out of my kitchen”, she explained. “It gives me a chance to interact with the customers”. It seemed like most of the diners already knew her and we heard a few ‘see you next week!’ remarks. So far, so good. 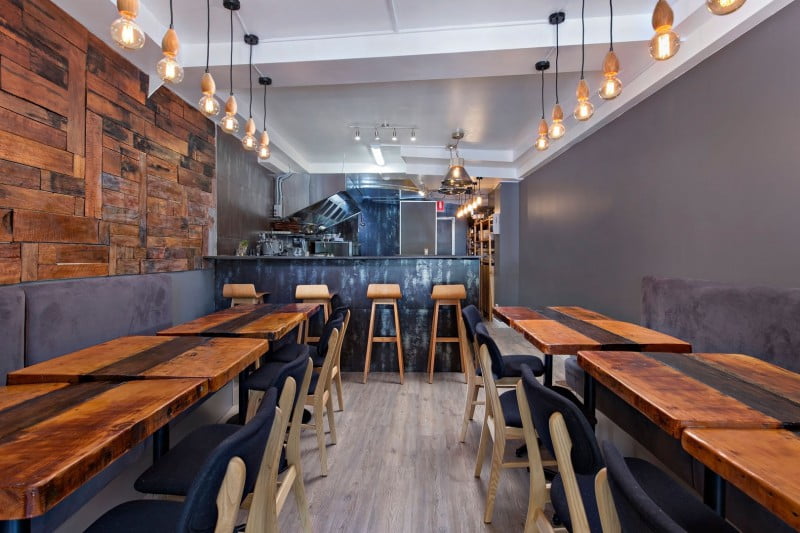 Every seat is filled when we enter mid evening. Their tables were laden with plates of food and their hands held glasses of red wine. Hoost is a BYO restaurant ($3 corkage per person), allowing you to bring along your favourite drop. Browsing the menu, we couldn’t quite pin point the staple cuisine. “I don’t like to restrict the menu to one sort of cuisine”, Pok later explained to us. “Some would call it modern Australian, or fusion. I like to take Asian ingredients and put a Western twist on them and vice versa”. So we were preparing ourselves for a very intriguing dining experience. 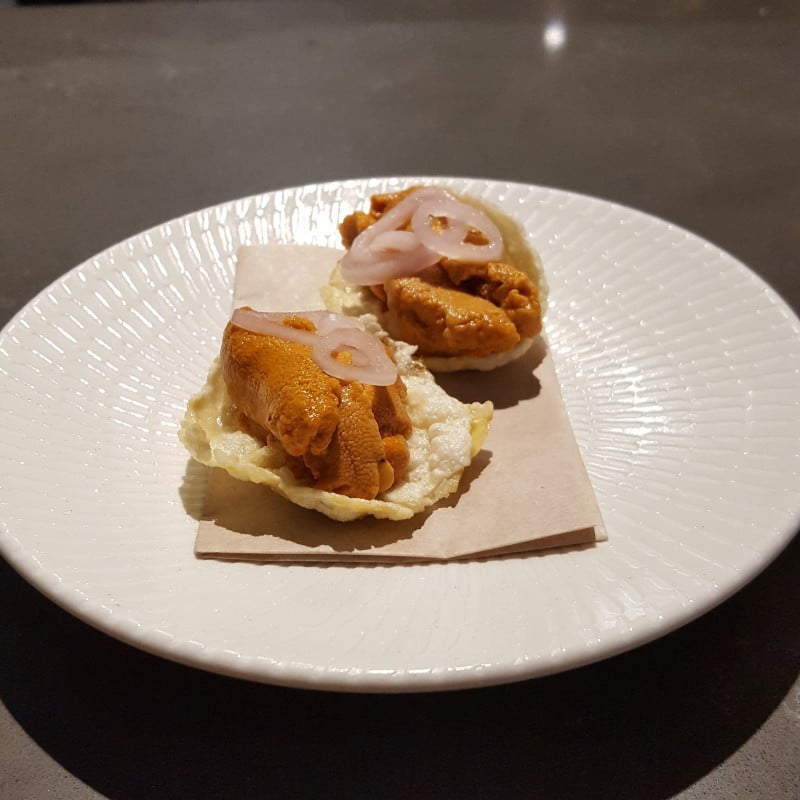 Hoost opened it’s doors eight months ago and originally carried a very different concept. The restaurants name comes from the Danish ‘høst’, meaning ‘harvest’. Pok is a woman of many titles, including the eateries chef, manager, server and kitchen hand. What a talent! During a solo venture across Japan and Europe, Pok chanced upon a tiny restaurant in Copenhagen that served only one dish a night. Inspired by this unconventional idea she brought it back to Sydney. If you had stumbled upon the innovative Hoost eight months ago you would have had only one choice for your dinner that night. Pok has since decided to change the direction and concept of the restaurant in order to suit the Sydney vibe and crowds.
To start our fusion feast we decided on bitter nut crackers with sea urchin roe and pickled eschallots ($18). For all you seafood novices out there, sea urchin roe looks and tastes like no other fish roe you may have indulged in before. The texture is velvety, the colour is vividly orange. And if you have the acquired palate, it tastes absolutely delicious. In my case, it did at first taste quite fishy. Cut with the sweet eschallot pickles and slightly bitter crackers however, the fishiness and natural saltiness was balanced out well, making this one delectable mouthful. 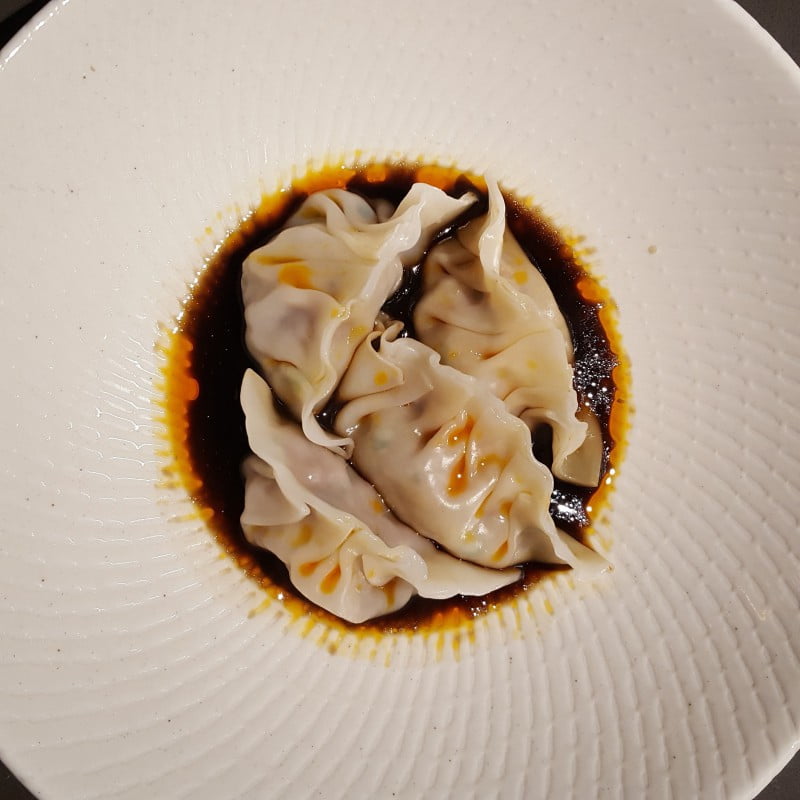 Next up we had the pork and kangaroo dumplings with szechuan chilli oil and black vinegar ($18). It doesn’t matter where I am, if there are dumplings on the menu, there are dumplings in my belly. The pork and kangaroo worked well together. I could certainly taste the gamey flavour of the kangaroo meat. Just make sure you get the whole lot of that tasty, semi sour flavoured dressing on your dumplings. No one likes a dry dumpling! 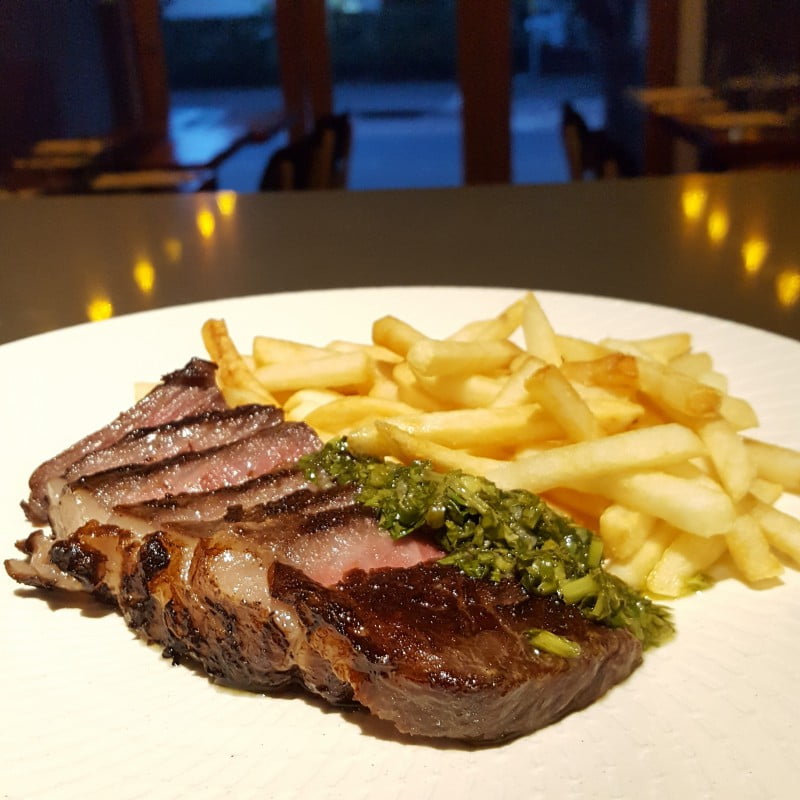 From wagyu to salmon to whole roasted cauliflower, you’ll definitely be spoiled for choice when it comes to mains. We couldn’t say no to the 175g koji aged wagyu porterhouse (marble score 7+) served alongside fries and chimichurri dressing ($36). The beef is hand selected from the Australian Meat Emporium in Alexandria and dry aged with koji to give it a concentrated flavour. There’s just the right amount of fat marbled throughout the steak to make each mouthful melt in your mouth. The addition of the zesty chimichurri accompanies the steak remarkably well, giving off Spring BBQ vibes. 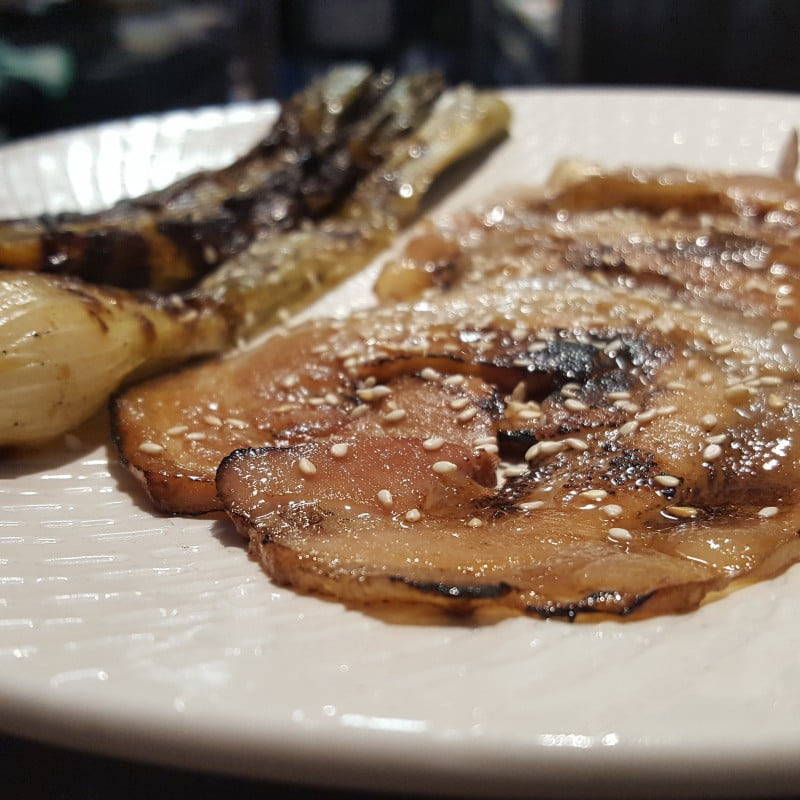 The star of the night however would have to be the 36 hour Japanese chashu with miso roasted scallions ($26). Chashu is Japan’s answer to bacon. Large slices of tender and juicy braised pork belly are served alongside long pieces of scallion char grilled to perfection. The pork cooks in a sous vide for 36 hours, ensuring an incredibly tender cut of meat. There was no talking during this portion of dinner. It was just one bite of creamy scallion and smokey, succulent chashu after the other. 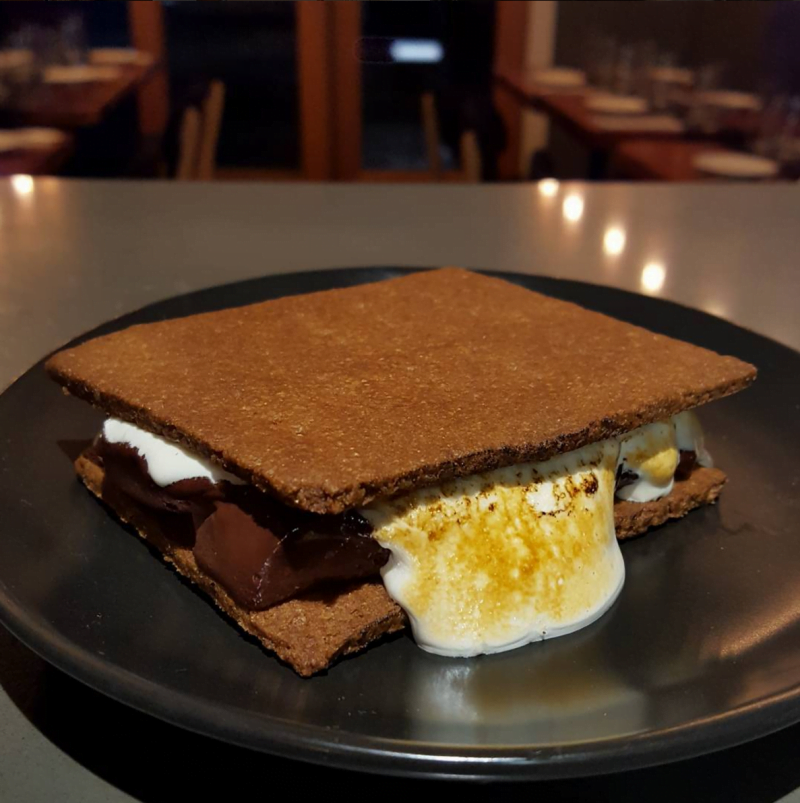 You’re given two options for dessert. Trust me, it’s a tricky decision. After some deliberation, we decided to order the adult s’more’s ($14). Graham crackers are lathered with coffee marshmallow and melted smoked almond chocolate. The dish is then blasted with a kitchen torch to create that ‘camp bonfire’ effect. Word of warning, this dessert is very sweet. That being said, I wouldn’t bypass the opportunity to taste test this dish. The marshmallow has a creamy texture and seems to dissolve almost as soon as it hits your tongue. The coffee flavour is just strong enough and compliments the dark chocolate wonderfully.
While the dishes are served on the smaller side, each meal is packed full of flavour with an indulgent feel. Not quite contemporary Australian, not quite Asian fusion, the restaurant relishes in simply serving up good food. It’s fine dining with some local, friendly charm and definitely worth a visit.
Hoost Restaurant
98 Fitzroy St, Surry Hills NSW 2010
Open Tues – Sat 6pm – 10pm (dinner), Sun 10.30am-2pm (brunch)
http://www.hoost.restaurant