The Duke of Clarence – New Hidden Bar in Sydney

Owners of The Barbershop (one of Sydney’s best hidden bars), Mike Enright and Julian Train are continuing to explore their love for alleyway hideouts with the opening of their latest venture, The Duke of Clarence.  Inspired by the refinement of 19th Century England, The Duke of Clarence is opening Monday 4th December, right next to The Barbershop.
From the highest shire to the lowest county, Mike and Julian have rummaged through the mother country in search of objects that will recreate an authentic taste of England. From the window to the wall, the pair have returned with items over 100 years old. Even the floorboards date back to the 1850s. 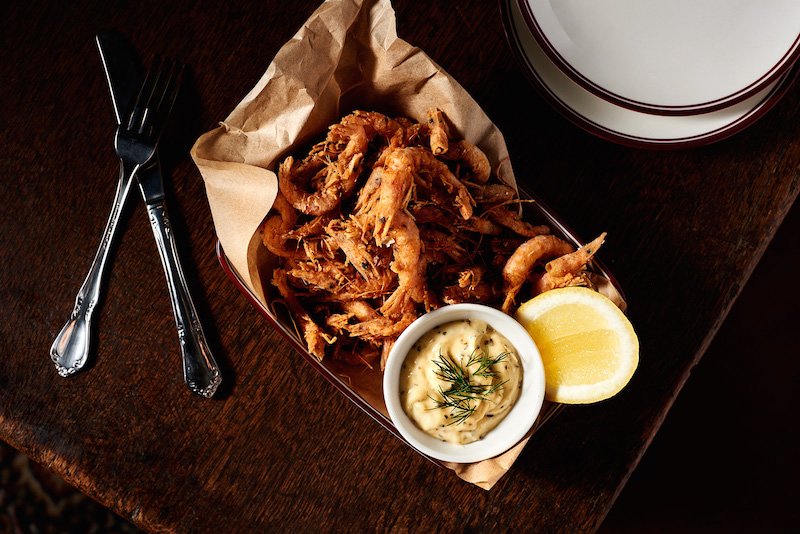 Under the watchful eye of a portrait of The Duke of Clarence himself, the warmly lit bar is hoping to transport bar-hoppers to the days of Great Britannia. In collaboration with Sara Matthews, the lauded film set designer behind such visual masterpieces as Moulin Rouge and Ned Kelly, Enright and Train are determined to establish the feel of “a proper pub”.
Fitted with a 12-metre long timber table, oak wood panelling, a library corner and a fireplace, Enright says that The Duke of Clarence is “a real English boozer”. Of course it wouldn’t be a boozer without the booze! With a list 500 spirits strong The Duke of Clarence looks set to deliver on its promise.
“The Clarence is a homage to the days gone by”, says Enright. “But we want it to feel as fresh and forward-thinking as it is nostalgic, so the drink will very much reflect this. Guests can expect classic cocktails, treated with Victorian-era twists or rotovapped with ingredients that were used during the time of Charles Dickens.”
The pub grub will also draw inspiration from the English yesteryear. Hailing from the Merivale team, Liverpudlian David O’Brien has been tasked with creating a menu to match the The Duke of Clarence’s refined British character.
Who’s The Duke of Clarence?
The pub is named after the Duke of Clarence, who went on to become King William IV, monarch of England. His reign saw several powerful reforms – the poor law was updated, child labour restricted, slavery abolished in nearly all the British Empire, and the British electoral system refashioned by the Reform Act 1832. Clarence Street was named after him, and now, he even has a Sydney pub in his honour.
Pour us a pint, we’ll drink to that!
The Duke of Clarence
Laneway 152 – 156, Clarence Street, Sydney
contact@thedukeofclarence.com
Doors open Monday 4th December!
http://thedukeofclarence.com