Take your taste buds to the streets of Bangkok as you crunch down on David Thompson’s classic Prawn Cake recipe.

Sydney has no shortage of culinary talent but someone who has stood the test of time is David Thompson. Over 20 years the Australian chef has built a reputation around the globe for his knowledge of authentic Thai cuisine. While traveling to Thailand in the late 80s, Thompson fell in love with age-old recipes that were just waiting to be rediscovered. His philosophy was to showcase these traditional recipes at his restaurants and ignite a newfound appreciation for Thai cuisine around the world. After earning a Michelin Star and a place in the World’s 50 Best Restaurants within 6 months of opening his first restaurant, it’s clear his mark has been indented in the hospitality industry for many years to come.

In more recent years, Thompson opened a chain of restaurants called Long Chim in Singapore, Perth, Sydney, Melbourne and Korea. The venues were born out of a passion for Thai culture and you’ll find traditional street food from places like Bangkok on the menu. “The streets of Bangkok are the part of Thai culture I love the most. You’ll find most Thai’s prefer to eat in the markets and on the streets – and it’s where you’ll find me too,” says Thompson. 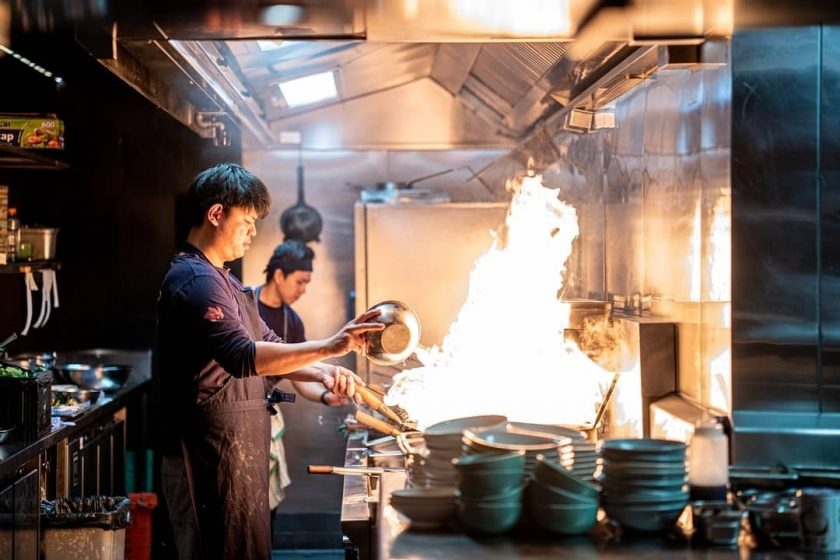 As you step into the restaurants, you’ll feel you’ve been magically transported to a modern scene in Thailand. The interiors are best described as dark and industrial, and the walls are covered with traditional artworks from Bangkok artists. The open-style kitchen means you can watch the chefs at work, just as you would in the streets of Bangkok. The restaurant is lit by the kitchen’s open grill flames and the aromas travel to every corner of the restaurant so there’s truly no bad seat.

There are many dishes on the Sydney menu that have become renowned but we can’t stop thinking about the Prawn Cakes. They are served golden and crispy with the perfect sweet and salty plum sauce for dipping. While you can’t visit Long Chim, Thompson is sharing the recipe so you can create a traditional Thai feast at home.