If you’ve been to Japan, you’ll know it’s not uncommon to stumble across a cafe where every table features sky-high soufflé pancakes. The best part about it is that these cafes are usually open from breakfast through to dessert time, which means you’ve got every chance to get your fix no matter the hour. There were few choices for this kind of indulgence in Sydney and that’s when Gram Cafe & Pancakes thought they’d bring a piece of fluffy heaven to Australia.

In 2020, Gram opened its first Australian venue in Chatswood and it has since grown a cult following by Sydneysiders. Anything this grammable will always have an appeal to the local foodies, but when the soft, delicate and decadent pancakes hit your lips, you’ll see why they’ve been the word on the street ever since. The new central location within The Galeries Shopping Centre is one of their four new cafes opening in Sydney and you can expect the rest to open within the next two years. 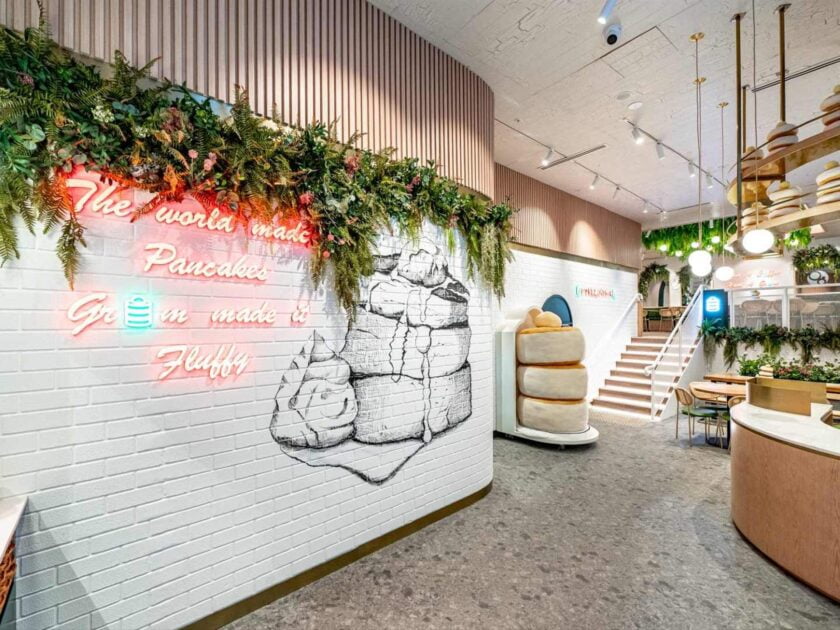 The new venue was designed by Adesigneory Studio and was made to build off the Chatswood cafes character. You’ll notice the iconic greenery has stuck, as well as the rich green seating, gold tones and modern wooden chairs. The neon lights and cute branded pillows also add to the cutsie aesthetic of the cafe. The banquette-style dining area holds up to 80 ravenous pancake fiends which is a testament to the demand. There’s also a one-hour dining limit which let’s face it, you won’t be needing any more than 20 minutes to devour your pancake stack.

The classics from Chatswood will remain on the menu including the Premium Souffle Pancakes, Mochi Pancakes and French Toast. Gram is changing it up however with some savory additions such as The Benedict and a larger variety of takeaway options to suit the time-poor CBD workers who need a sugar hit. Want to try the venue’s signature dish? The Galeries Premium Pancake has been designed to challenge even the biggest of eaters with three soufflé-style pancakes filled with Nutella cream, served with fresh slices of banana and toasted hazelnuts.

To celebrate the opening, Gram Cafe & Pancakes are throwing a Grand Opening Party on Saturday, the 6th of November. Pancake addicts will get the chance to win a variety of prizes including Gram merchandise and the fluffy pancake cushions you’ll see in the cafes.

Browse the full menu and find out more here