Pop in for a cocktail, stay for the crispy twice cooked chicken at China Diner.

First there was China Doll, then China Lane and China Beach. Next came China Diner in Bondi. Now, whether China Diner in Bondi did so well they were inspired to open a second in Double Bay or they just ran out names we’re not sure. What we can say is this formula is working and eastern suburbs diners can’t seem to get enough of this modern Cantonese meets South East Asian food. 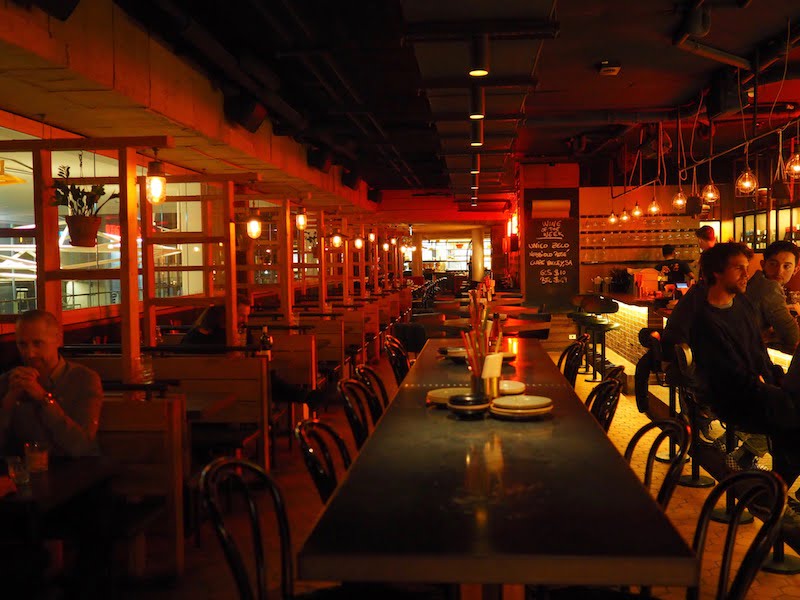 You’ll find the Bondi Beach restaurant located on Hall Street near the Adina Hotel. They’re keeping good company in this foodie hub surrounded by A Tavola, Bills, Messina, Blanca and Da Orazio Pizza + Porchetta. China Diner has two very distinct sections. A long bar captures your attention as you first enter with couples casually seated drinking cocktails and eating dumplings. Communal high tables and smaller booths fill the rest of this space. As you make your way to the back of the 200 seater restaurant it opens up into a large dining hall, slightly more formal with white tablecloths. There are a lot of seats to fill. And despite being a fairly quiet mid week dinner on a rather coolish spring night we’re told on the weekends it’s packed. Come summer they’ll turn the tables a few times over each night, especially on the weekends. 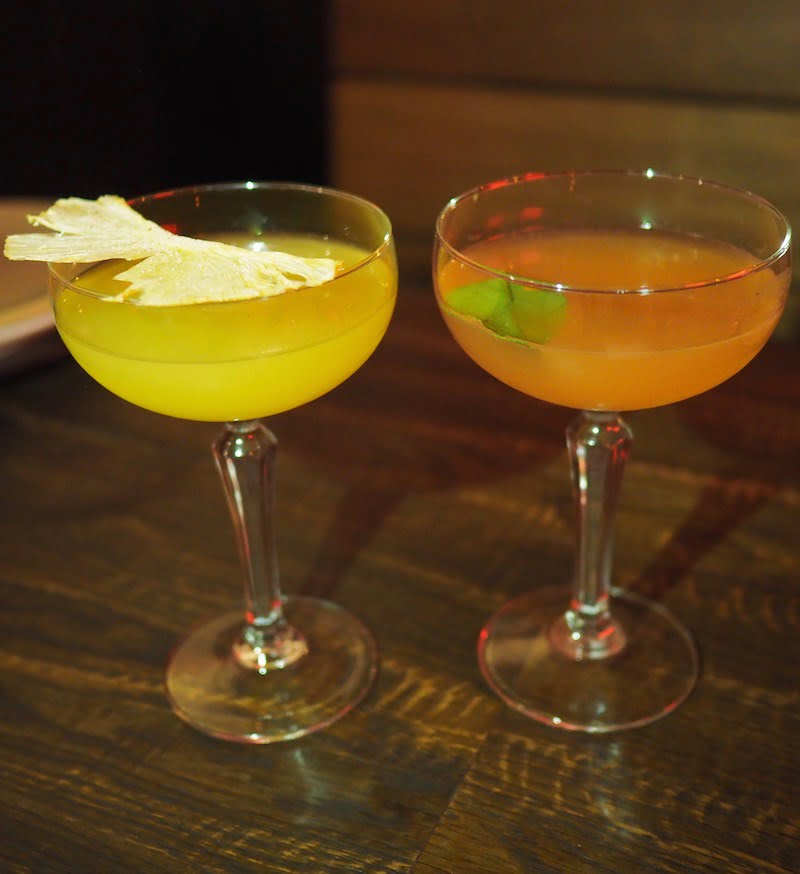 The cocktails are a big draw card at China Diner and probably my favourite part of the experience. The theme of Asian flavours carries across the drinks and the food. The Suzie Wong cocktail ($18) is a refreshing combination of watermelon, gin and kaffir lime. The Tropic Thunder ($18) packs more of a punch with chilli infused tequila, kumquat liqueur, passionfruit, pineapple and agave syrup. 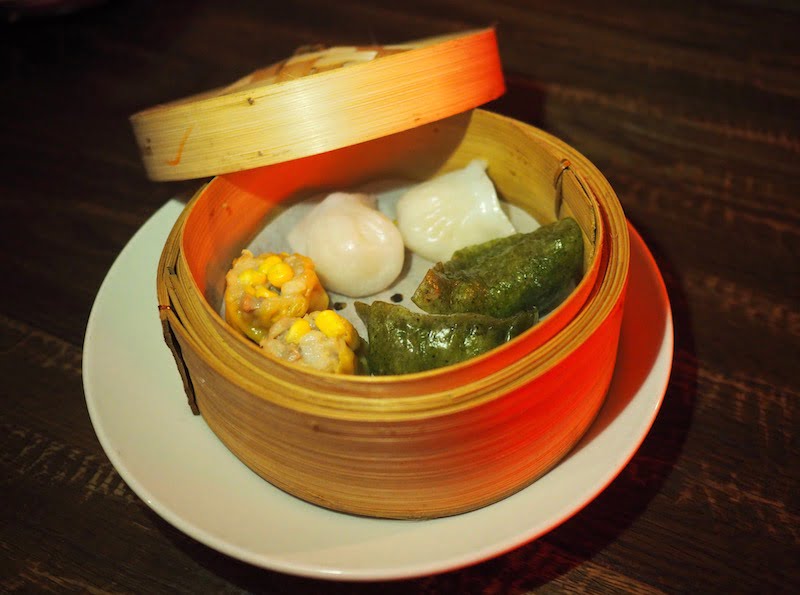 Grab some friends if you’re planning a visit to China Diner, the food is best shared and that way you can try more dishes. Between two of us we start with a mixed basket of steamed dumplings ($21). Two servings of chicken and corn shu mai, heavenly 8 green dumplings (vegetarian) and prawn and water chestnut dumplings arrive steaming hot in their bamboo basket. 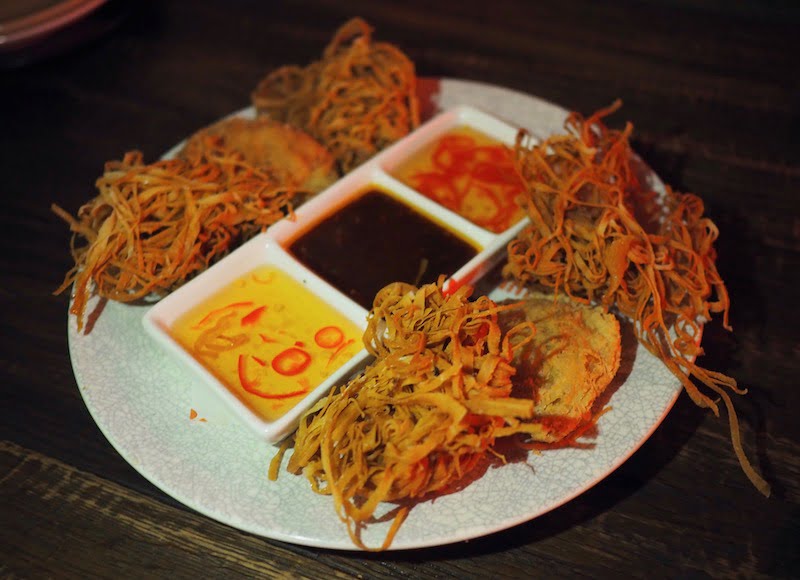 Steamed is where we should have stayed on the starters front. Some will no doubt love the crispy dumpling platter ($24) which comes with two servings of crispy lamb dumplings, prawn and bug ‘dragonball-z’ pieces and chicken and sesame ‘chiko’ spring rolls. For me there is just too much fried food happening on one plate. We swapped out the spring rolls for two extra dragonball-zs. They came covered in crispy noodles which you need to break away before being rewarded with a juicy bug. We end up with a mountain of crispy, fried pieces left on our plates and greasy fingers. 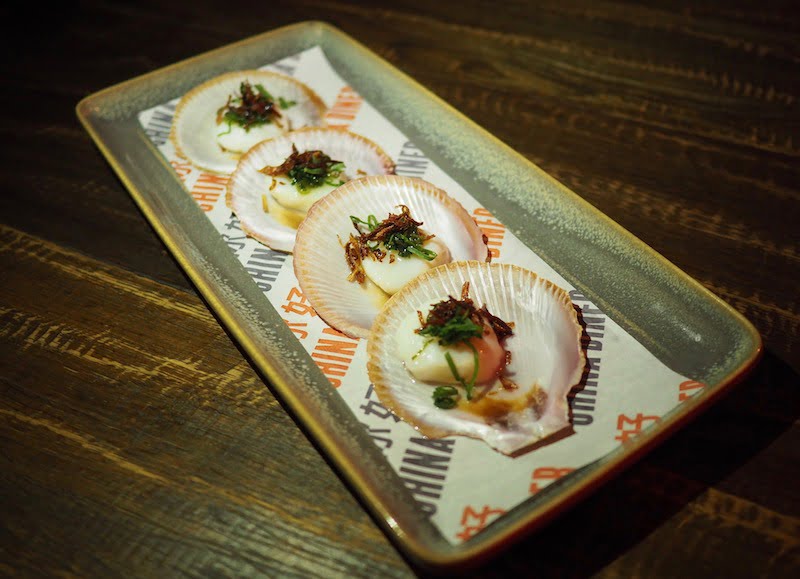 For something lighter and healthier try the scallops ($18). Four plump scallops are presented in their shell and topped with Vietnamese shallot dressing. For mains there are a few signature dishes to try including the massaman curry ($29). We share the steamed barramundi with chilli, garlic and pickle mustard greens ($30) and the crispy twice cooked chicken with chilli oil, aromatic soy, coriander and garlic ($30). Both dishes are cooked perfectly and really delicious with jasmine rice. 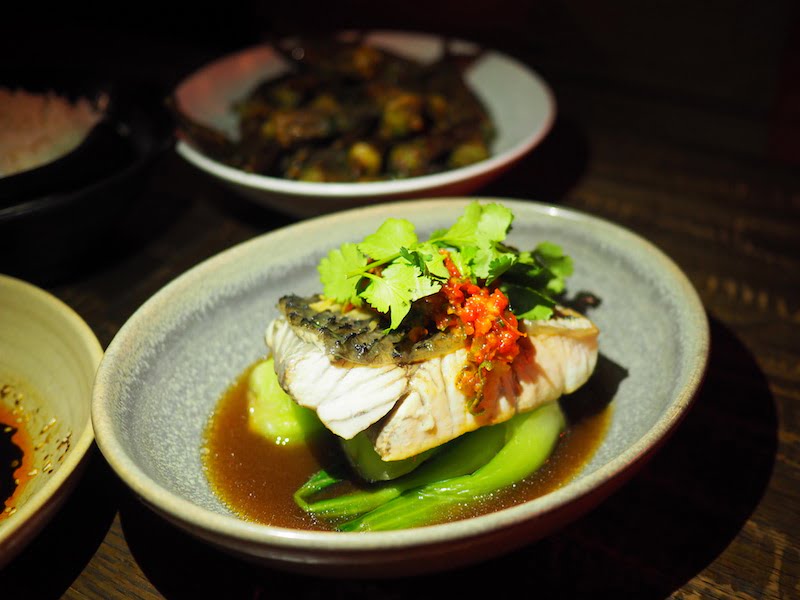 We may have gone overboard with the sides of crispy okra ($12) and choy sum ($10). The barramundi already comes served on a bed of greens so we probably could have skipped the choy sum. The huge serving of crispy okra is served with vinegar, garlic and sesame. It’s too big for just two people but split between four they’re a tasty snack. 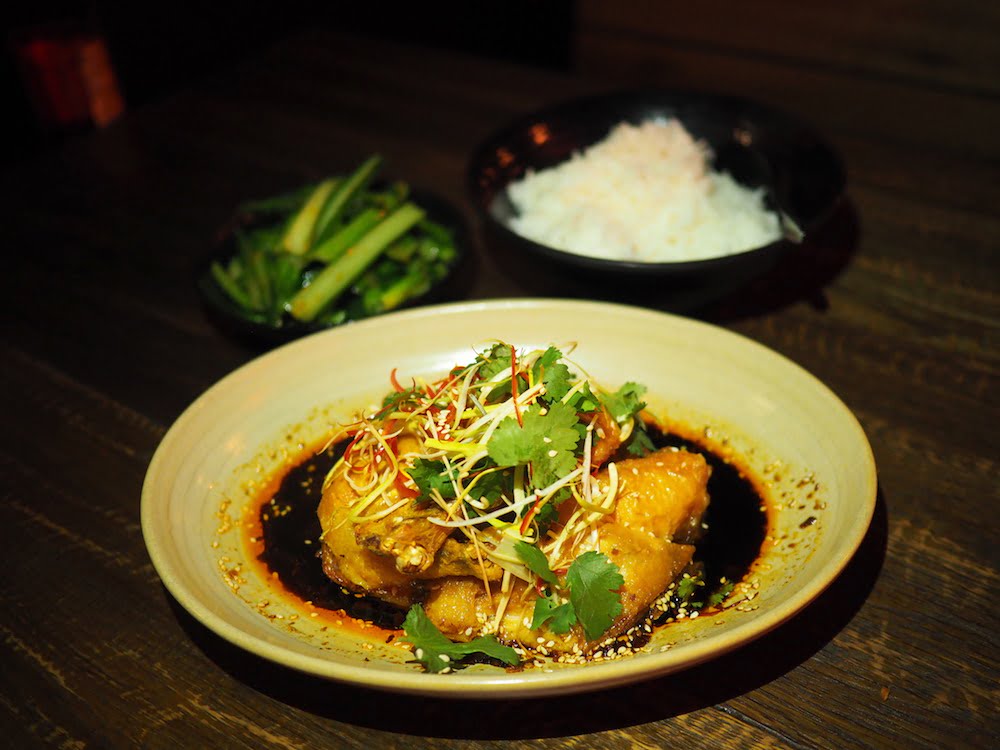 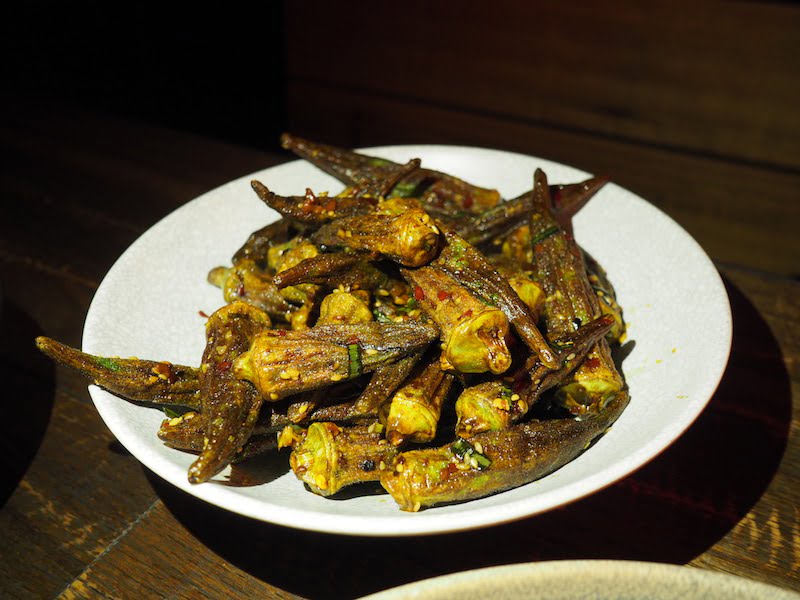 Leaving early to hit up Messina next door is temping but give the China Diner dessert menu a chance. There are delicious combinations including coconut and vanilla sago ($12) and black sticky rice with caramelised bananas and salted peanut praline ($12). We quickly devour the smashed ‘pav’ with green tea, yuzu curd and rhubarb ($15) without any regrets. 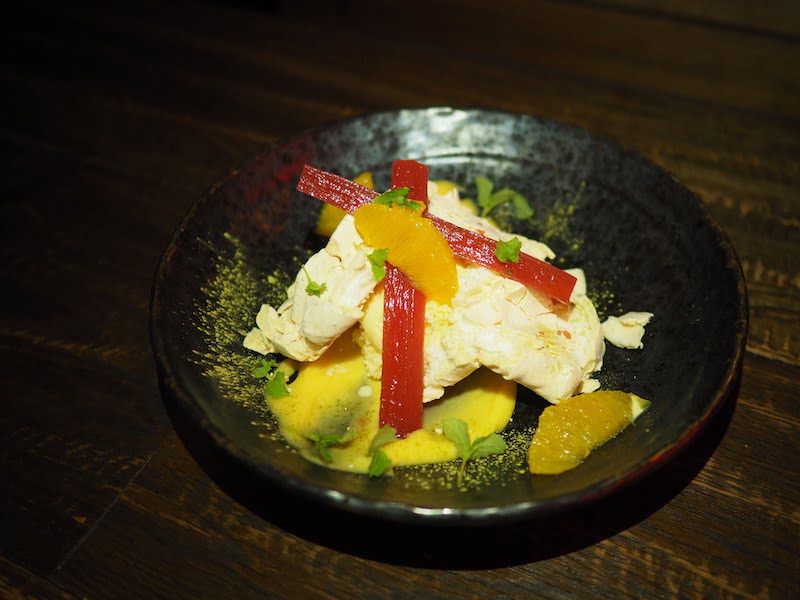 Now, just because it has the name diner in it doesn’t mean this restaurant is cheap. Between two the bill comes to just over $200 without a tip. We had two cocktails but a lot of food. Between the two of us (myself and a girlfriend) we finished almost everything except half of the chicken because she’s not a big meat eater. That said, choose your own adventure. They have a reasonable $50 set menu and if you’re sharing bottles of wine amongst a larger group it would probably be more cost effective. 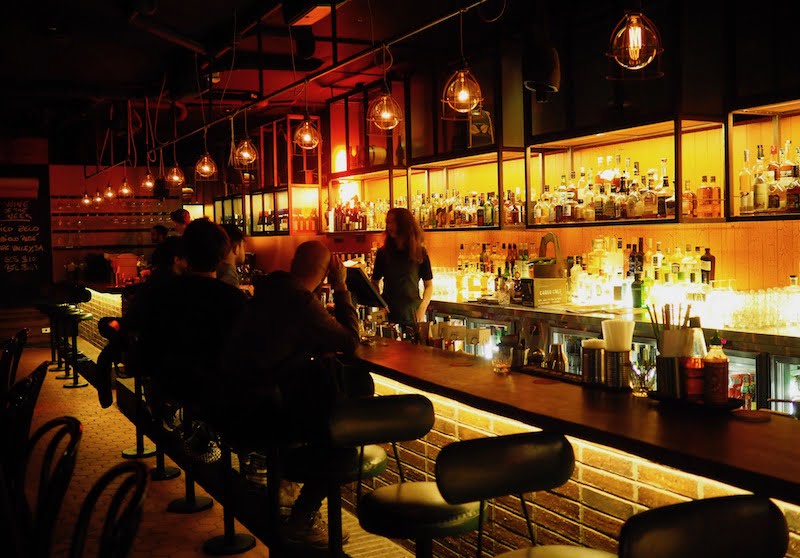