Bondi proves once again that they are well ahead of the trend and cooler than the rest of Sydney with a week-long objection to reduce takeaway coffee cup consumption and create a Guinness World Record. From 3-11 July, Bondi will become the first council locality in the entire world to go 100% takeaway coffee cup-free. Well-known locals Bills, Three Blue Ducks Bronte, Lox Stock & Barrel, Gertrude & Alice, bRU Coffee, Rocker, Porch and Parlour, The Depot and Drake are amongst half of Bondi cafes to have committed to banning takeaway cups. The movement coincides with the global environment campaign Plastic Free July, so there’s truly no better time to get amongst it, take a stand, and go plastic-free. 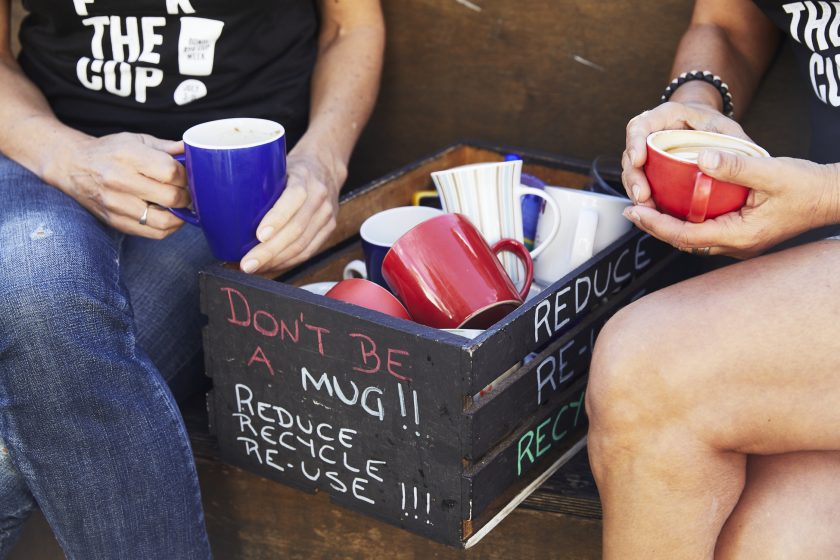 Did you know Australias toss 2.7 million coffee cups into landfill every day? This has made takeaway cups the number one contributor of waste after plastic bottles. “It’s only one takeaway cup… said 1 billion people.” Australians are now officially the number one users of single-use plastics and we’ve got to make a change for the better of our planet. Locals Sondra Beram from bRU Coffee, and New York Times bestselling author and climate motivator Sarah Wilson have joined forces to make it happen. “Takeaway coffee cups are such a visual symbol of the set-up we all feel locked into, that’s ruining the planet,” says Sarah. “We all know it’s doing harm, particularly to our oceans, but we feel powerless to change things unless someone goes first…”. Sondra knew her cafe bRU Coffee would need to rise to the challenge. With a well-used mug library already in their processes, installed jugglers ridding plastic milk bottles, and their coffee packaging served in 4kg refillable coffee tins, they knew they could take it up a notch and get the community involved.

With over 40 cafes banning takeaway cups for the week, the community will save more than 35,000 cups from landfill. Coffee addicts will be served their coffee only three ways – using their own keep cups brought from home, with a mug library provided by the cafe, or served in the cafe – which let’s face it is the best way to enjoy a coffee.

Want to see if your favourite Bondi cafe is involved? Find out HERE
Making a statement on your gram? Tag #bondibyocupweek & #f*ckthecup

Did you know North Bondi Fish is transforming into a Japanese eatery this winter? Find out more HERE