When I was about ten my parents took my brother and I to stay at a fancy hotel in Melbourne. It was so fancy it even had a doorman dressed in a formal waistcoat, top hat and coat-tails. Macaulay Culkin and Home Alone were a huge hit at the time, a character my five year old brother really resonated with. As we approached the doorman my brother stopped, looked him up and down, reached into his pocket and handed him a piece of gum as he proudly stated “thank you James, there’s plenty more where that came from”. It was an awkward, albeit cute moment for us all and for some reason a memory that sprung to mind when I first entered the new French Restaurant Bistrot Gavroche in Chippendale.

After feeling a little puffed from climbing the grey, concrete stairwell to level one (give me a break, I was in heels) I arrived at the newest restaurant addition to the popular Kensington Street dining precinct. Those stairs are a dull distraction that don’t quite prepare you for the stark contrast of warm, wood-heavy and oh so French decor of Bistrot Gavroche. It’s as though the owners, Chef Frenchmen Frederic Colin and sommelier Lionel Richard have taken a French bistro from Paris and planted it bang, smack in the middle of Sydney. And talk about fancy. If only my five year old brother could be here to meet Lionel Richard. 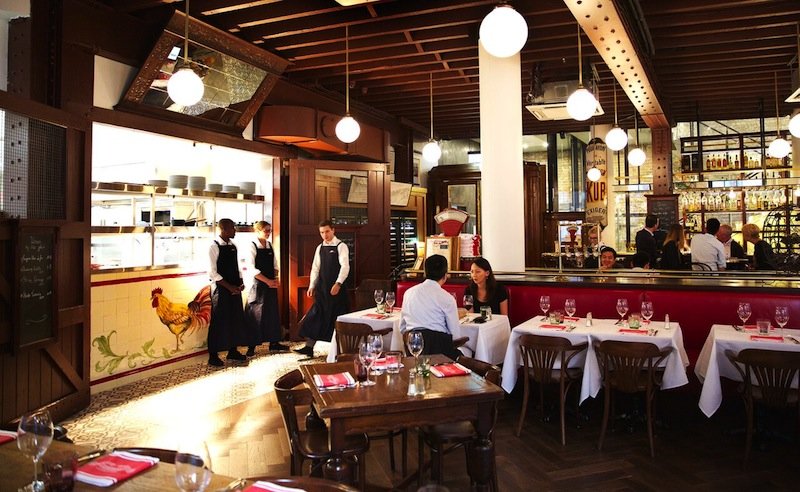 We’re greeted with a distinct French accent and shown to our little table by one of the windows that wraps around the corner walls. They’ve done an excellent job to create the feel of a French restaurant without the cheesy, themed-restaurant vibe. Antique furniture and soft finishings imported from France and Europe obviously add to this authenticity including a beautiful marble and wood cabinet, pâte de verre ceiling light, a four metre table previously used by Lyon silk manufacturers and a commanding three metre oak entrance from Brasserie George, one of Lyon’s oldest and most famous brasseries. 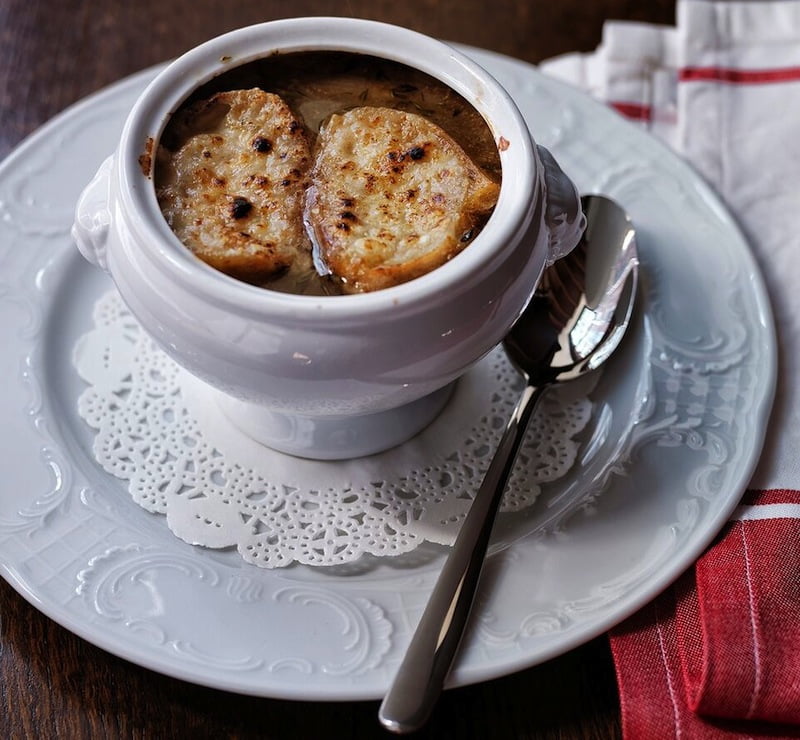 This is the second restaurant for Frederic Colin following the success of his first restaurant, Brasserie Gavroche, in Singapore. And whilst I jest about the fancy accents the food at Bistrot Gavroche is anything but ostentatious. It’s good, honest, French bistro food that’s classic and full of flavour. Lionel hands us large menus set in wooden frames, a cute novelty that is slightly awkward to hold but a fun point of difference.
Frederic’s inspiration for cooking started at an early age when he used to cook in his grand père (grandfather) Henri’s restaurant and kitchen from the tender age of 10. A lot of the dishes on the menu are inspired by this time in his life including Grandpa Henri’s pork terrine ($18), onion soup ($16) and bone marrow on toasted sourdough with confit garlic ($20). 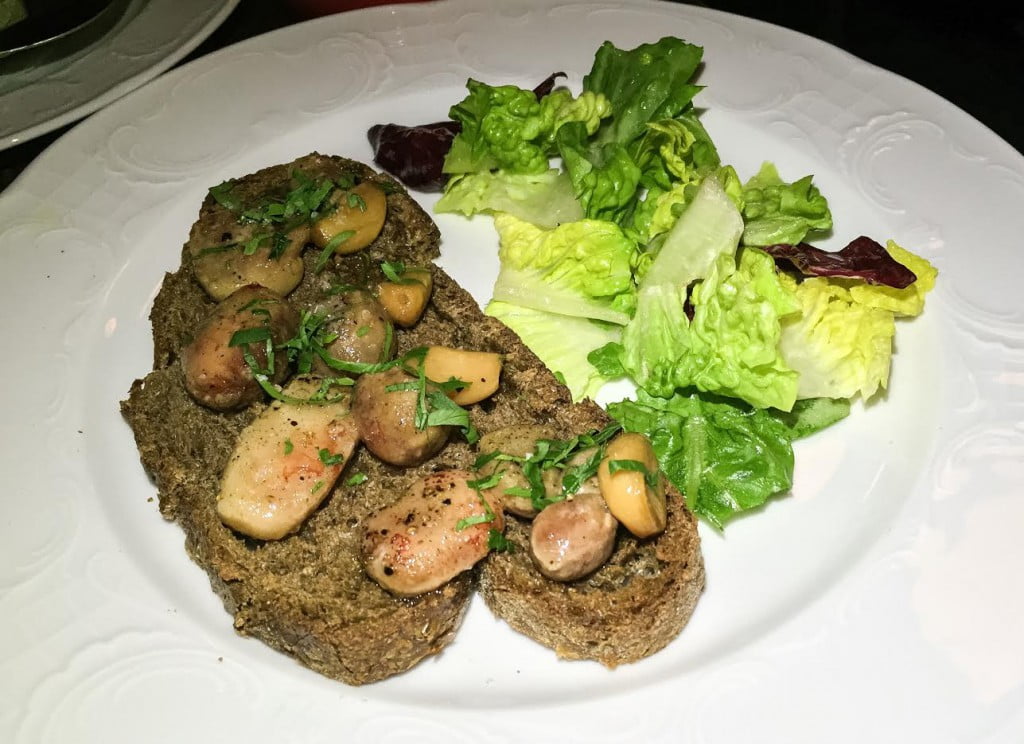 Along with some great French wine and an order of Burgundy snails baked in their shell with parsley and garlic butter ($21) you could easily feel as though you’re in Paris for a one night holiday. Everything is full of flavour, and garlic, and butter. But don’t worry about your breath, your dining companion will be with you on an eating crusade as a lot of the dishes can be shared. You might want your own steak frites though ($47) not because it’s not big enough to share but because it’s melt-in-your-mouth good and despite my piece being a little fatty, it’s almost too good to share. 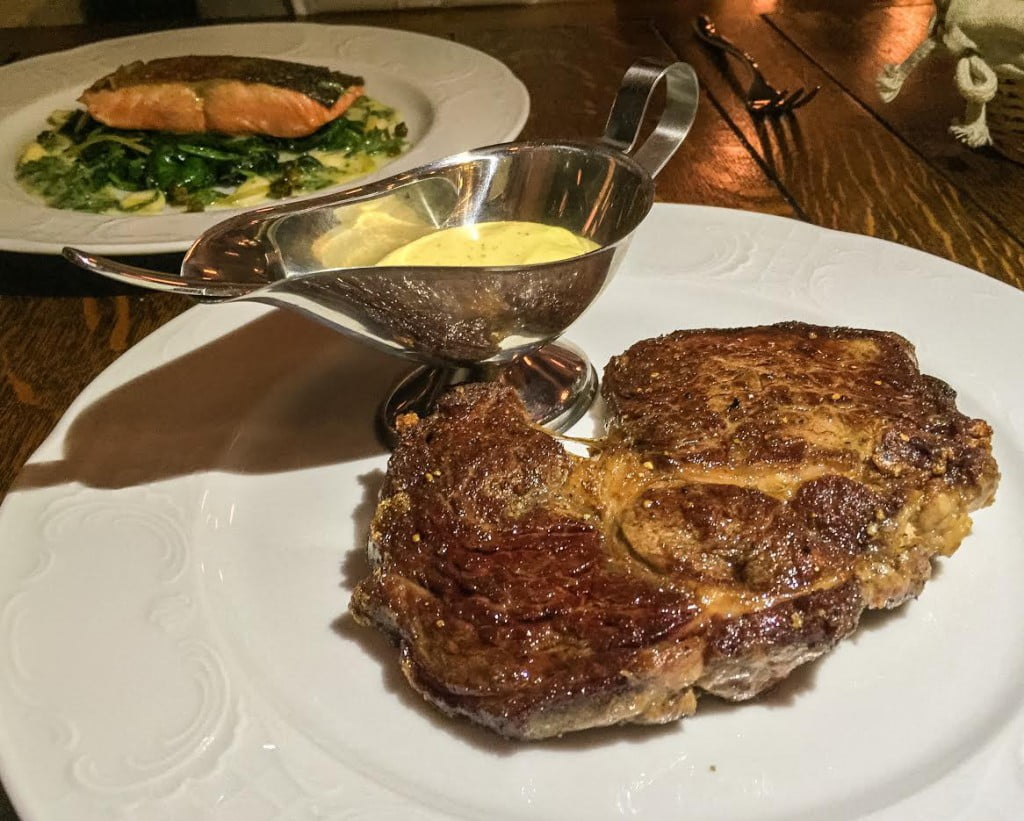 For dessert the crêpe suzette ($15) is set on fire before your eyes, a theatrical experience you’ll want to capture. But it is a very sweet dish and if you’re not a huge fan of orange marmalade flavours you should share this or go straight for the rum cart. As a little ode to the history of the building being an old rum factory, Bistrot Gavroch have a little wooden cart full of rums for you to order after dinner. You can also order different cheeses and build your own platter accompanied with bread and grapes. 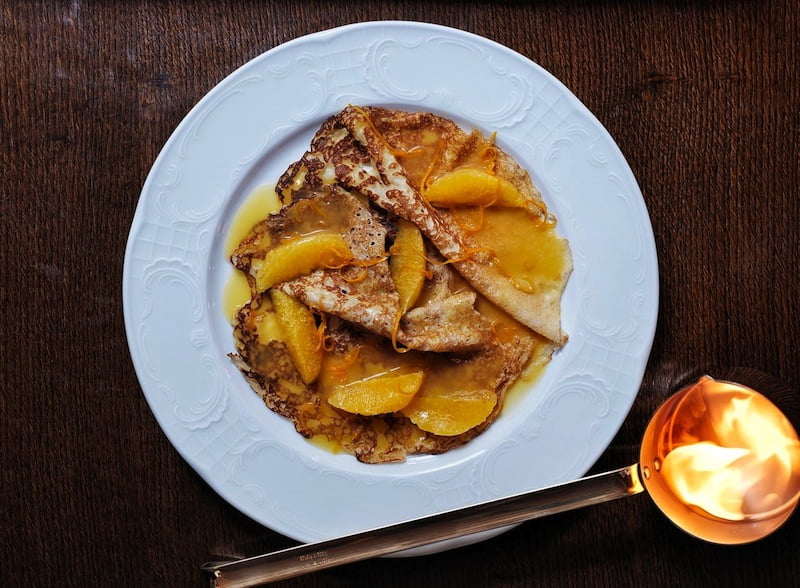 My ten-year-old self was so tempted to leave a piece of gum as tip, an ode to my little bro but I fear they may have taken that all the wrong way. Bistrot Gavroche is worth a lot more than a bubble gum tip. It’s classic French through and through, the kind of place you could return over and over again making your way through the menu.