Adelaide’s Beer and BBQ festival is Coming to Sydney

After taking Adelaide by storm, this beloved beer and BBQ festival gets set to travel north.

Beers and BBQ, like the sun and moon, avocado and toast, Tara and Sam from the Bachy – they are just made for each other. After massive success in Adelaide the team behind the inaugural Sydney Beer and BBQ Festival have decided to bring the festivities north to Sydney, and we’re pretty excited about it.
The Beer and BBQ Festival will be held at The Entertainment Quarter for three days, from Friday 29th June to Sunday 1st July. And as the name suggests, you can expect plenty of brews, bands, markets and a whole lot of meat.
The festival will be bringing 60 plus brewers from all over the nation to serve up their best beers all weekend long. One to note is the renowned brewer Jason Pond, who will be making his way from Scotland. Pond, who is the global head of production at BrewDog, will be collaborating with Aussie brewers to create some exotic flavours – think jalapenos, pineapple and chocolate. Taste them for yourself at the BrewDog bar at the festival.
Other brewers you’ll find include, Batch Brewing,  Capital Brewing, Green Beacon, Hop Nation, and Mismatch Brewing.
The BBQ line-up has been curated by Duncan Welgemoed from Adelaide’s renowned Africola. At the festival, we are in for a treat, as he is even bringing Canadian chef, Matty Matheson down under. Matheson is a self-confessed lover of all things Aussie and we can expect some impressive BBQ bites from him. 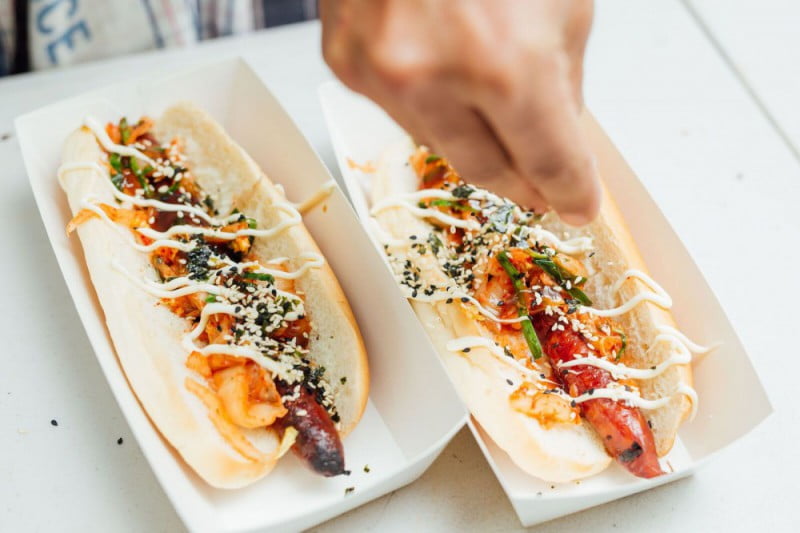 Others favourites you’ll find behind the BBQ include Belle’s Hot Chicken, Bovine & Swine, The Lansdowne, Low & Slow, Mary’s, P&V, Smith & Daughters, Something Wild and The Unicorn.
What better to accompany beers and BBQ than some beats? The festival will have two stages featuring some impressive talent over the weekend. The Preatures, Holy Holy, Jen Cloher, Bob Evans, Maddy Jane, Gooch Palms, Mojo Juju will be gracing the stage with more artists to be added.
But the fun doesn’t stop there. There will be live tattooing, a barber shop, vinyl record shop and even a hot dog eating contest.
You can purchase either an individual session ticket or a season pass. Individual session prices range from $30 – $45, or you can opt for the ‘The Whole Hog’ Season Pass for $80. The festival is 18+, except however, for the family friendly Sunday session.
If you’re wanting to see a specific band, be sure to book the session they’ll be playing in.
Find out more on the website.
Or buy tickets here.
DETAILS
Beer and BBQ Festival
Where: The Entertainment Quarter, Cnr of Errol Flynn Boulevard and Lang Road, Sydney, Australia 2021
When: 29th June – 1st July 2018
Price: tickets range from $30 – $80