Can’t afford a holiday? Bang Bang brings a slice of downtown Tokyo to the inner-city.

If you’ve travelled to Tokyo, you’ll be familiar with its beloved alleyways. Almost hidden in plain sight, they house some of the best ramen, whisky and yakatori hangouts in Japan, if not the world. Now, bringing a slice of Shinjuku’s vibrant district to Steam Mill Lane is Bang Bang.
Opening its doors on Thursday 9th August, this 85 seater Izakaya bar meets eatery will quickly draw you in with its moody red tones, suspending lanterns and striking artwork by local designer Harley Johnston. While the bullet-sprayed roller doors will catch your eye, the delicious smells of the robata grill will hit you much sooner.

How you experience Bang Bang is completely up to you. Take a seat behind the curtains of the yatai stall, or escape the hustle and bustle in the hidden traditional tatami room. Like belting out a tune? Now’s your chance to sing your heart out in Bang Bang’s glass karaoke box.

As for the menu, Head Chef Kokubo Yuji’s casual lunch menu offers an array of Japanese favourites including omelettes, udon, curries, signature donburi, and ‘The Bang Bang Tebasaki’: a tower of double-fried chicken wings doused in a peppery soy glaze.
Arrive for dinner and you’ll be treated to the likes of edamame and gyoza, robata, sushi and sashimi, tempura, salads, and a selection of doria gratins, noodles, and rice. 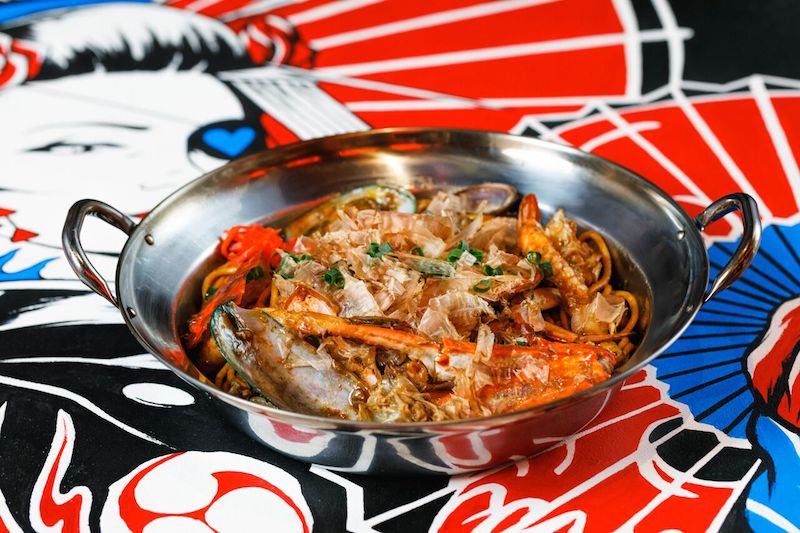 The drinks menu certainly doesn’t come as an afterthought, with an ever-growing list of Japanese and international whiskies available from the bar alongside sake, local craft beer and locally sourced wines. Dive into the cocktail menu to find the likes of shochu and whisky concoctions inspired by the Japanese back alley “rojiura” drinking culture. Think the Citrus Bombard, made using seasonal citrus juiced inside its own skin and infused with shochu.
“We want Bang Bang to deliver a taste of Tokyo’s past and present,” says head of operations Ayako Sugimura. “We’ve woven traditional elements like the yatai stand, which is where for decades locals in Tokyo have pulled up a stool to devour a bowl of hot ramen, through to the modern-day karaoke box, which is very much Tokyo right now. In food and drink, old-school teriyaki chicken sits alongside the more modern carbonara udon. The team had a lot of fun immersing themselves in the street culture of Tokyo’s vibrant alleyways in order to bring that to life here at Bang Bang.”
Bang Bang is open 11:30am-10:30pm | 7 days a week