Al Taglio, Surry Hills – Is this the best pizza in Sydney?

Situated on Albion Street in Surry Hills, Al Taglio is a small Italian restaurant with a big title. They’ve just won two awards at the World Pizza Championship (Australian Edition) at the Fine Food Festival. Pizza chef Daniele Paoletti won the title for the best gluten free pizza as well as the best pizza classica. They beat more than 50 competitors for the converted gourmet pizza awards.
But this shouldn’t come as a surprise for anyone who’s dined at Al Taglio before. Many already call this neighbourhood restaurant “the best pizza in Sydney”. Italian born dough enthusiast and owner Enrico Sgarbossa opened the restaurant in July 2016 with a mission to deliver a “new wave” of pizza to Australia. The pizza chef is a flour technician by trade (yes that’s a job) who spent years consulting to other popular pizza restaurants in Italy and Sydney before opening Al Taglio.
His ethos centres around using the very best, seasonal ingredients. “Why import asparagus from overseas when you can just wait until it’s in season in Australia when it’s cheaper and fresher?” explains Enrico.
You’ll always find just seven pizzas on the menu at Al Taglio and these change every three months along with the seasons. But don’t expect to find a meat lovers or Hawaiian special on this list. The pizza here is very different. It’s the pizza for the health conscious, significantly lighter and easier to digest.
Each pizza based is prepared and sliced before each piece is individually layered with just a few simple ingredients. Take the winning classica pizza – a spin on amatriciana pasta. It comes with a tomato and onion base topped with a cream of pecorino cheese and pieces of guanciale (an Italian cured meat prepared from pork jowls). It’s arrives cold which is both unexpected and confusing at first. That doesn’t stop me from eating the entire pizza to myself. It’s still tasty and gives me an opportunity to taste the freshness of the ingredients. But I can imagine it’s not for everyone. 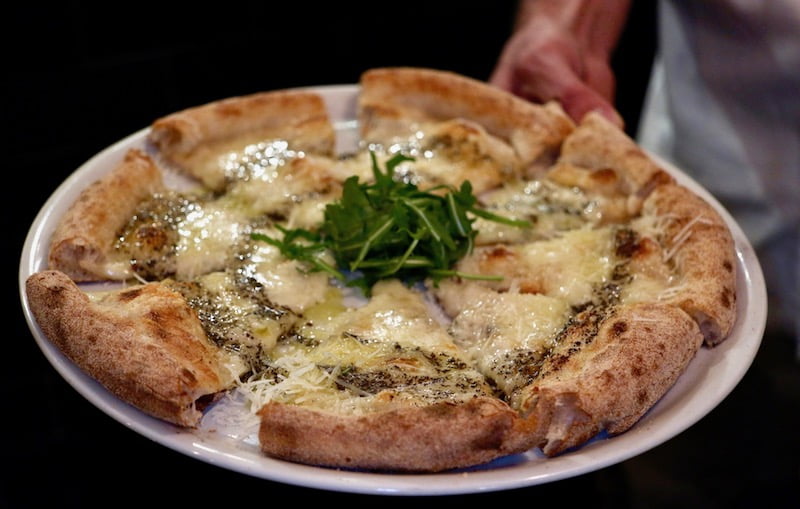 The winning gluten free pizza was made with potatoes, lardo and mozzarella cheese but all pizzas ($23) can be made gluten free for an additional $5. It’s recommended to pre-order the gluten-free base as they do sell out. Good news if you’re vegan, they have several pizzas on the menu that can be tailored to suit your requirements including the use of a new soy mozzarella from Japan.
Whilst pizza is the focus here you’ll find a selection of antipastos and  homemade focaccia. They also make their own dips. There’s a weekly Roman style gnocchi special for $20 and three different salads including a caprese ($12), mixed leave ($8), and pear and rocket ($10).

A short list of organic wines and craft beers makes up the drinks list along with a $12 Aperol Spritz. They also have a small selection of desserts.

What’s next for Al Taglio?

Enrico explains that his restaurant has become very popular amongst the hospitality industry with a lot of chefs coming here on their nights off. So he’s started doing monthly collaborations. Next month Enrico Tomelleri from 10 William St will be challenged to design his own pizza for the menu, followed by David Rebeccato from Aqua Dining and Federico Zanellato from Lumi Dining.
If you want to try the wining pizzas be quick. Al Taglio will feature them as specials for the next month and after that it’s on to the next challenge.
Al Taglio
102/104 Albion St, Surry Hills
(02) 8021 5944
Open: Mon – Sat 5.30 – 10.30pm for dinner, Fri 12-3pm for lunch.
See Website