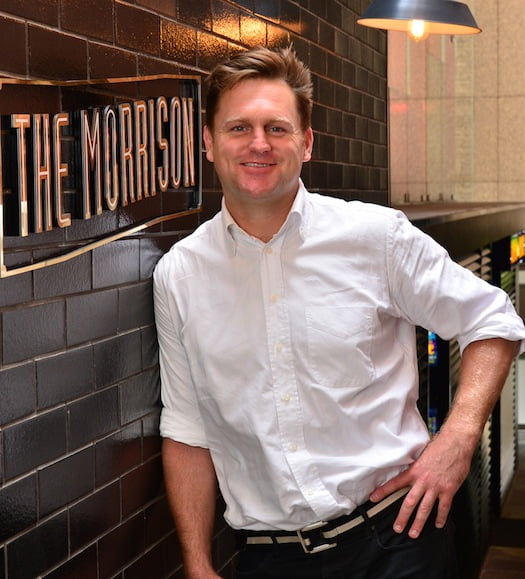 Fraser Short has been in the bar industry for over 20 years and recently was awarded for his Outstanding Contribution to the Bar Industry. He’s owned over 15 bars and restaurants in Sydney, each being like his own children, and he currently owns the morrison. He’s got some big plans for Watson’s Bay’s Boutique Hotel so we had a chat with him to get the low down on that venture as well as some of his best memories.

1. You’ve been in the bar industry for over 20 years – tell us a bit about what sparked your passion.

My father, the late Warwick Short, was in the industry so I grew up around hotels from the age of dot but never really saw myself going into the business so I studied interior design. However, a few things changed in my dad’s life and he needed a hand so I opened Scubar in Sydney central with my brother in 1997 and then, after completing my bachelor of design degree, I opened Cargo Bar in 2000.

2.    What’s the best memory you have working in the bar industry? Any funny stories to tell?

There are too many! Probably the best times were during staffies after the bar closed. We worked such long hours so the party for staff afterwards made the long shifts all the more worth it!

3.    You’ve just been awarded for your outstanding contribution to the bar industry at the recent Bartended Awards – how does that feel?

It’s a huge honour – that sort of acknowledgement from my peers is extremely humbling.

4.    You’ve owned and operated over 15 bars and restaurants in Sydney – What has been your favourite place so far?

They are like children. Each bar or restaurant has been a real reflection of what I’m into at the time. Scubar was a backpacker bar that was inspired by my travels around South America and Thailand. The Winery was a conscious move away from nightlife. Now, Watsons Bay Boutique Hotel is really reflective of a guy who is almost 40 with three very young kids and who can’t stay up late to run a door list! If I had to choose between them all I think Watsons Bay; the scope, the offering and the beautiful setting is second to none. What we will offer the customers over the coming years will be a real plus to the community.

5.    You currently own The Morrison Bar & Oyster Room – what do you think makes it a special dining experience?

The atmosphere and the attention to detail that chef Sean Connolly has to his food. He plates up really honest fare that is fuss free yet each dish is so well composed in taste. The oysters there are, in my opinion, the best in Australia. True.

6.    Tell us some more about your plans into boutique accommodation and dining at Watsons Bay Boutique Hotel.

The hotel has the most beautiful hotel rooms each with its own marble ensuite and panoramic views over the harbour. The location, the ambience and the unique setting really make this a go-to luxury hotel for a reasonable price.

7.    Do you have any other bar/restaurant plans for the future you can let us in on?

Right now it is all about summer in Watsons Bay!

I’d have to say it’s a tie between The Morrison and The Apollo.

I like to drink wherever my wife and friends are to be honest. I’m very adaptable in that space!

10. On your time off where do you PLAY in Sydney?

I love Bondi and the RMYC at Point Piper. Alternatively, anywhere on the harbor and up the central coast.