Every ‘Rage’ Playlist from the Last 20 Years in One App

This app pulls together 20 years of epic Rage playlists.

It’s time to cast your mind back. Are you one of the many Aussies across the nation who has tuned into ABC music program Rage on any weekend over the last 30 years? It might have been late on a Friday night, or even bleary eyed come Saturday morning. Talking about our memories of Rage in the office, some confessed that they knew they were up too late on a Friday night when they flicked on the TV and Rage was on. Our very own Ms Darlinghurst might have even admitted to the fact that she used to make up dances to various clips broadcasted.

One thing we all agreed on is those distinctive ‘raggggggggggeee’ vocals. As they fill your ears, it sends an excited shiver up your spine. You know that you’re up for an epic compilation of music tracks.

With those memories afresh in your mind, what if we told you that you can now relive these precious 90s and 00s music years? Well you now can. Ambitious Brisbane developers Brock Kenzler and Michael Henderson have released a new iPhone app called ‘Rageaholic’. 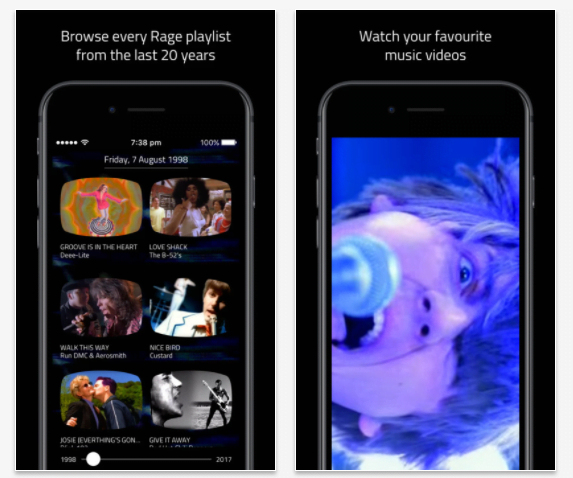 It’s pulled together every single Rage playlist from the last 20 years.

There are over 200,000 video clips on the app, collated into around 2000 playlists starting from January 1998 and finishing in May 2017. If that wasn’t enough, it allows you to make your selection based on guest programmer.

You can also stream the App through your TV – giving the whole crew access to this throwback musical wonderland.

Before you ask, the app is free to download. Simply hop onto the app store on your iPhone and get grooving straight away. The likes of Sonic Youth, Blondie, Madonna plus many more are all there waiting for you.

Fancy reliving the distinctive intro for yourself? You can listen right here.