How To Host An Epic All Aussie Wine Dinner Party

It’s no secret I love eating out at restaurants. There is always a hot new place to check out somewhere. But nothing quite beats having your nearest and dearest over for a a relaxed evening of delicious food, awesome wine and great company. Being Aussie Wine Month I was inspired by Dan Murphy’s to create my own dinner party for five of my besties. We’re all big foodies who love our wine. We also don’t scrimp when it comes to dining out. Some people spend their money on cars or shoes. For me it’s food and wine. When I go out to dinner I could easily spend $150 a head for a mid-priced restaurant. So my friends and I decided to put our restaurant money into a lavish dinner party. Here’s what we came up with…enjoy! 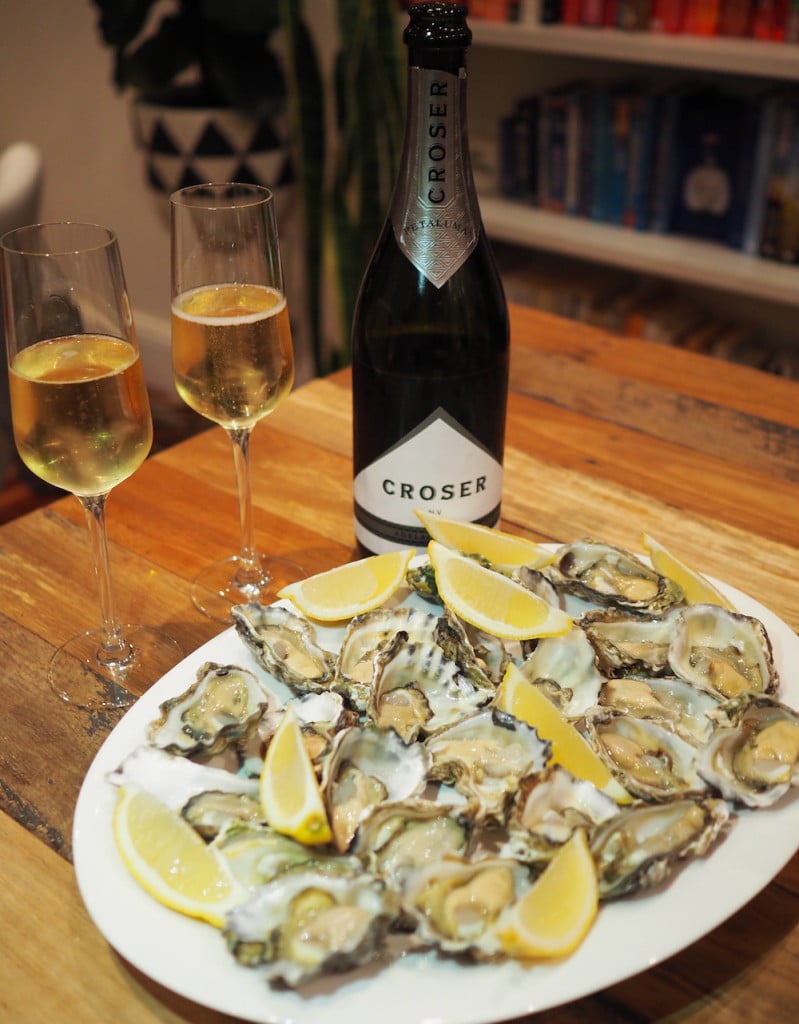 We started with fresh Sydney Rock Oysters that my friends picked up on their way back from a weekend away in Killcare on the NSW Central Coast. It’s really easy to go straight for the Champagne when it comes to oysters but look a little closer to home and you’ll be pleasantly surprised. I served chilled bottles of Petaluma Croser NV with the oysters, a really easy drinking Pinot Noir Chardonnay varietal from the Adelaide Hills. It’s not too sweet and has a rather dry finish. At just under $23 a bottle it’s a lot cheaper than most Champagnes, yet just as elegant and a beautiful first drink for the evening. 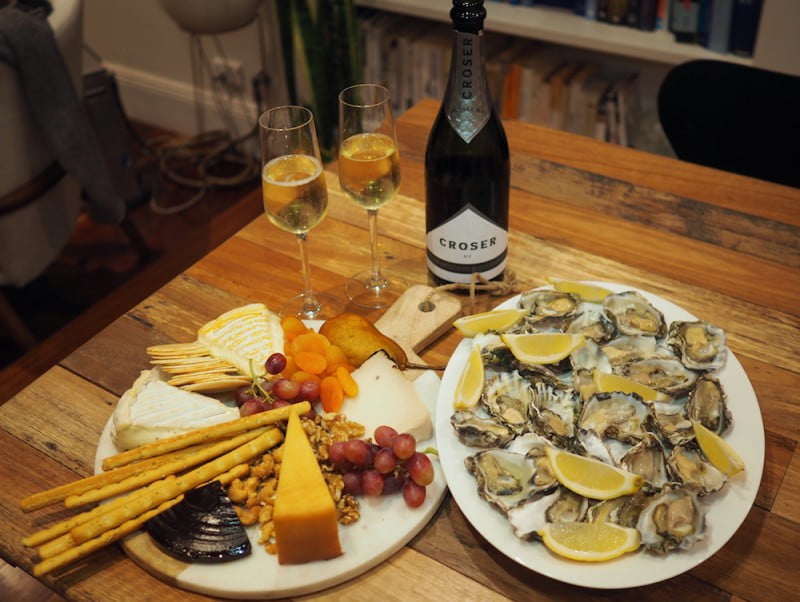 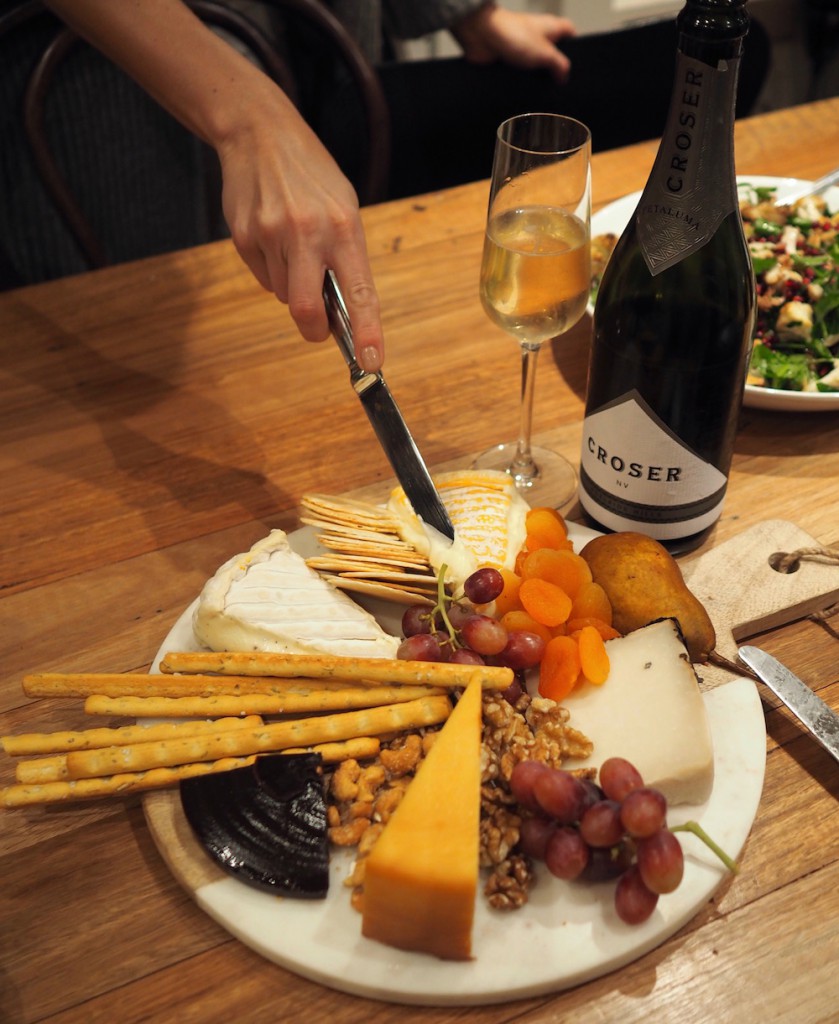 Along with oysters I also put together a decadent, overflowing cheese board featuring four different types of cheese. All up I spent $65 on cheese alone and have no regrets! Not when there was Fromager d’Affinois with Truffles, a King Island smoked cheddar, a Fromager d’Affinois wash rind and a delicious semi-hard goats cheese on offer. Get creative with your cheese board with accompaniments. People first eat with their eyes before they taste and there’s nothing sadder than a couple of bits of cheese plonked on a plate with a box of crackers next to it. Nuts, grapes, assorted crackers and quince paste are really easy additions to jazz up your cheese board. 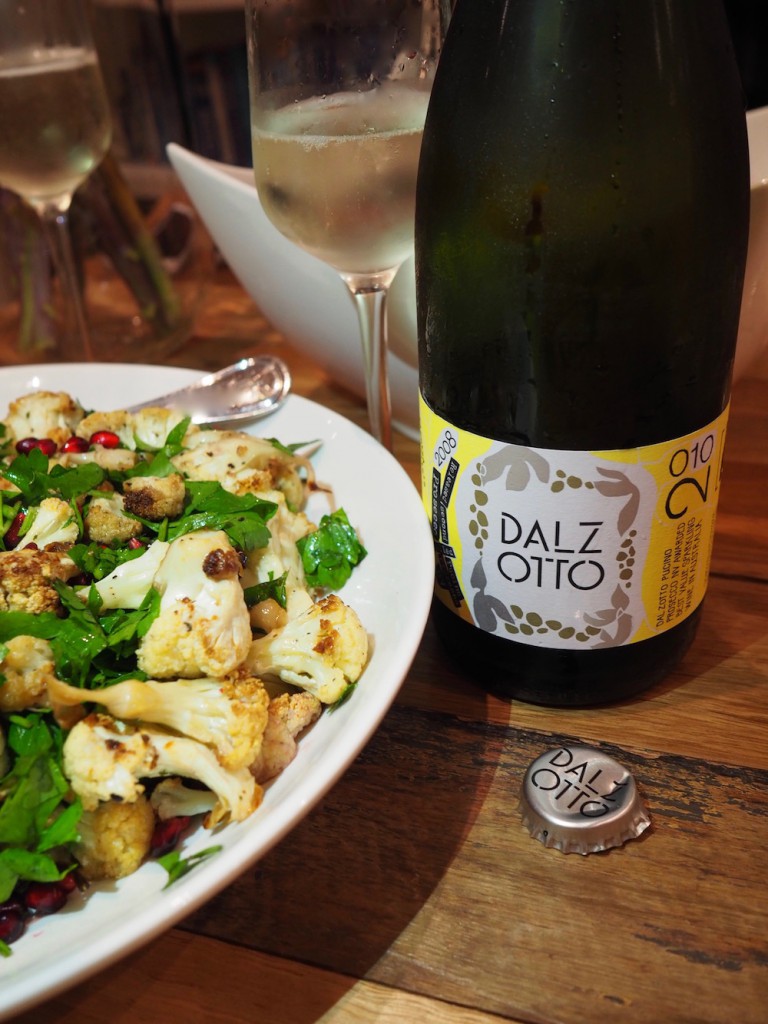 The cheese and oysters went out together and to go with both I put a bottle of Dal Zotto Pucino Prosecco on the table. I’d never tried this King Valley Prosecco before but was really drawn to the label and the bottle cap. No boring branding or cork here, this winery seemed to be doing things different. At $18 a bottle I took a chance and it was a punt that paid off! My friends raved about this prosecco and thought it was a lot more expensive than it really was. It went well with the cheese, oysters and some of the salads I served with the mains. 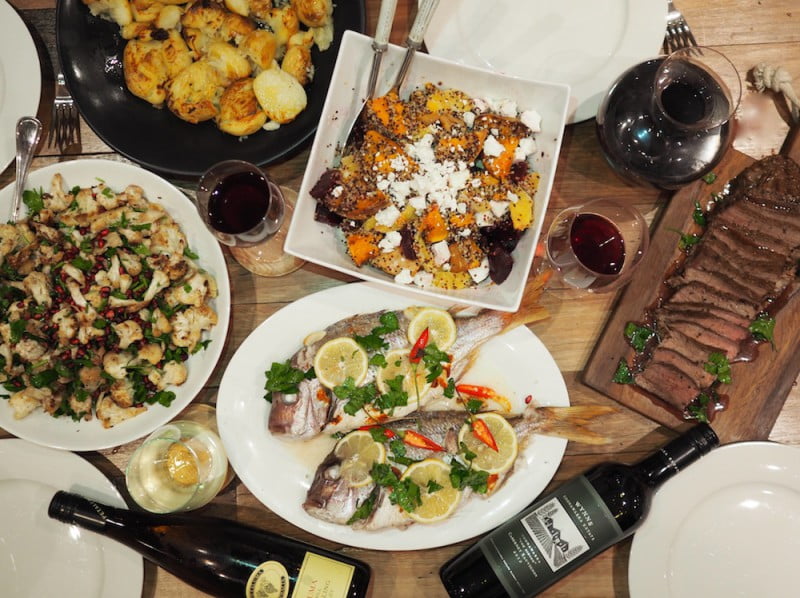 With the bubbles doing their thing and conversation flowing we moved onto mains. My friends also picked up some fresh snapper from Sea Coast Fishing Kindcumber. Their fish is caught fresh daily. We cooked them whole in the oven covered in crushed garlic, lemon, butter, chilli and a splash of Penfolds Riesling  – cooked at 180 degrees for around 12 minutes. I served the fish with Petaluma Riesling from Clare Valley ($22). You can’t really go with Aussie Wine from Clare Valley, especially when it comes to riesling but the Petaluma brand is one my friends and I have all had before and really enjoy. Two of my friends visited their winery a year ago and have been raving ever since. 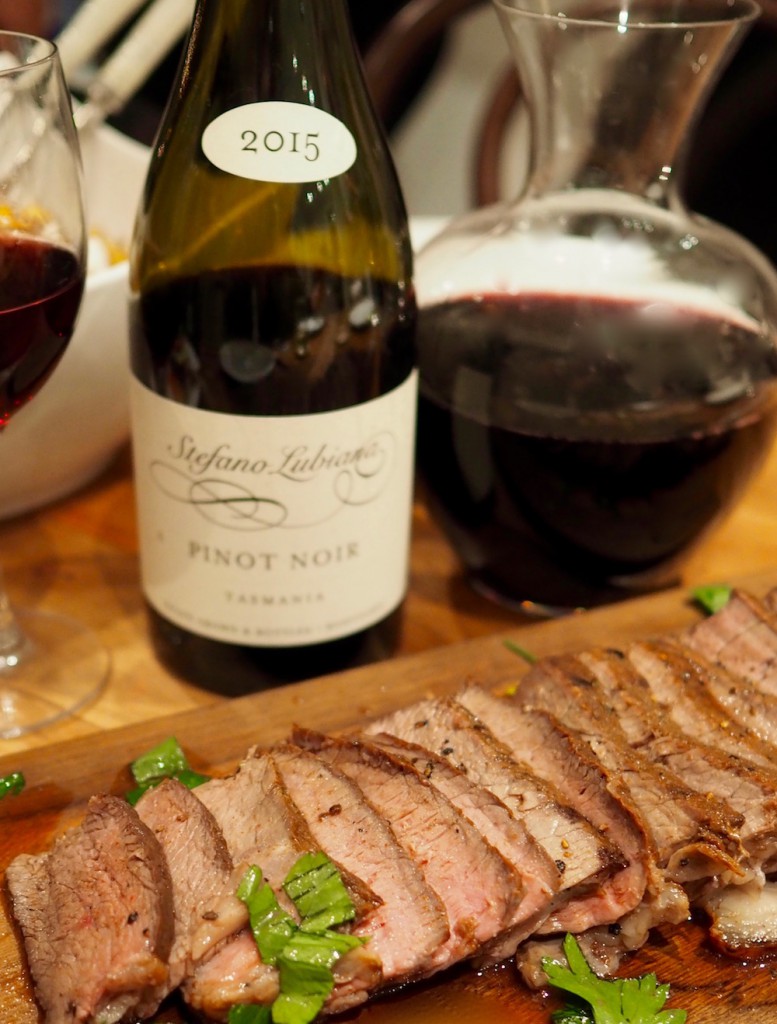 Meanwhile on the BBQ a large piece of marinated rump steak was cooking till pink. I thought I’d try two different types of red Aussie wine with the steak. I’m a big pinot noir drinker, I think it’s really easy drinking and versatile with food but was worried it might be too light with the steak. I was wrong. I splurged on two bottles of the 2015 Stefano Lubiana Pinot Noir ($50 per bottle) from Southern Tasmania. Being a medium bodied wine it was smooth elegant and actually went well with both the snapper and the steak (there’s that versatility I mentioned). After the last drop was poured I immediately regretted not ordering more. But we had Wynns The Siding Cabernet Sauvignon 2012 to get through next. Not as smooth as the pinot we poured into a decanter to let it breath which definitely helped open up the wine.

I kept the salads simple and seasonal. My signature cauliflower salad went down a treat in particular. It’s one of my all time favourite salads and an idea I stole from a Lebanese chef named Simon Zallou when he was head chef at Zefa Kitchen in Bondi. We hosted a Secret Foodies there one night and whilst everything was delicious it was this dish that stayed in my mind. I’ve since appropriated it my way but it’s always impressive. 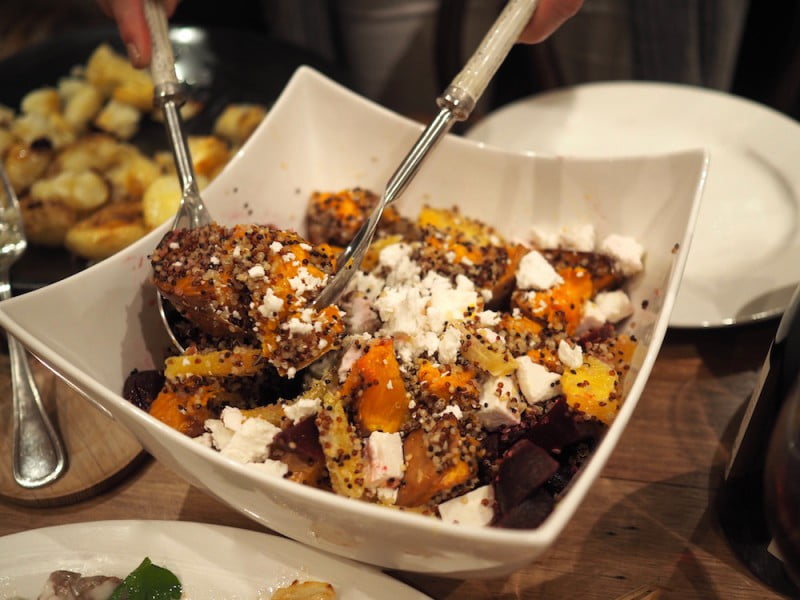 The other salad I made was perhaps a bit too heavy for such a big meal. Consisting of quinoa, roast pumpkin, beetroot, feta and slices of navel orange orange it was great on its own for lunch the next day, but very filling. Especially since we also had smashed roast potatoes!

For dessert I decided to try something a bit different and made Donna Hay’s Flourless Cacao Cake. It was moist but quite rich so I served with a dollop of cream and it went well with the Wynns Cab Sav that we kept drinking through mains and into dessert.

Overall our Aussie wine dinner was a success! No one left hungry or thirsty and everyone agreed it was better than most meals we’ve had at restaurants recently…but that could have been the wine speaking. 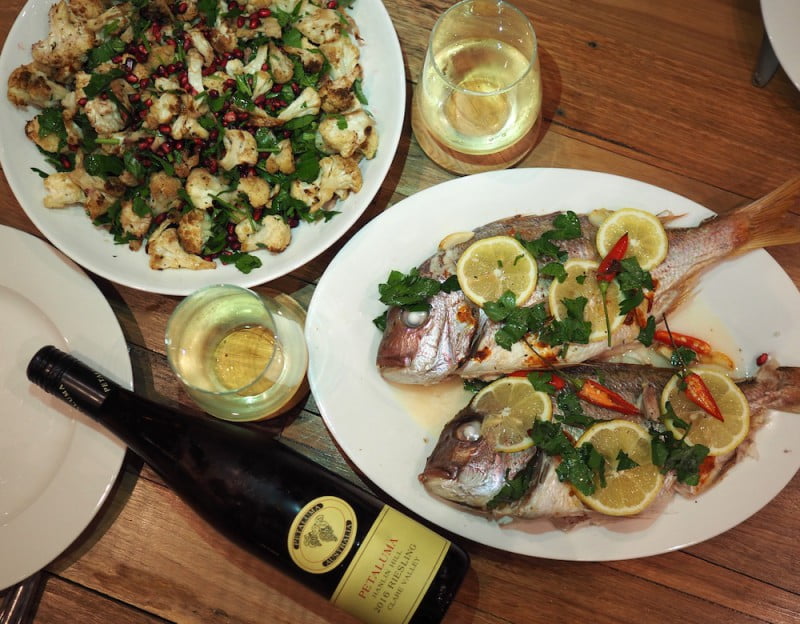 Preheat over to 180°C
Season the snapper with the juice of one lemon, crushed garlic, sliced chilli and butter
Sprinkle with chopped parsley or coriander (or both!) then lay slices of lemon on top, add a splash of Petaluma Riesling (and take a sip for yourself while you’re there) and pop into the over
Let it cook for approx 25mins and serve 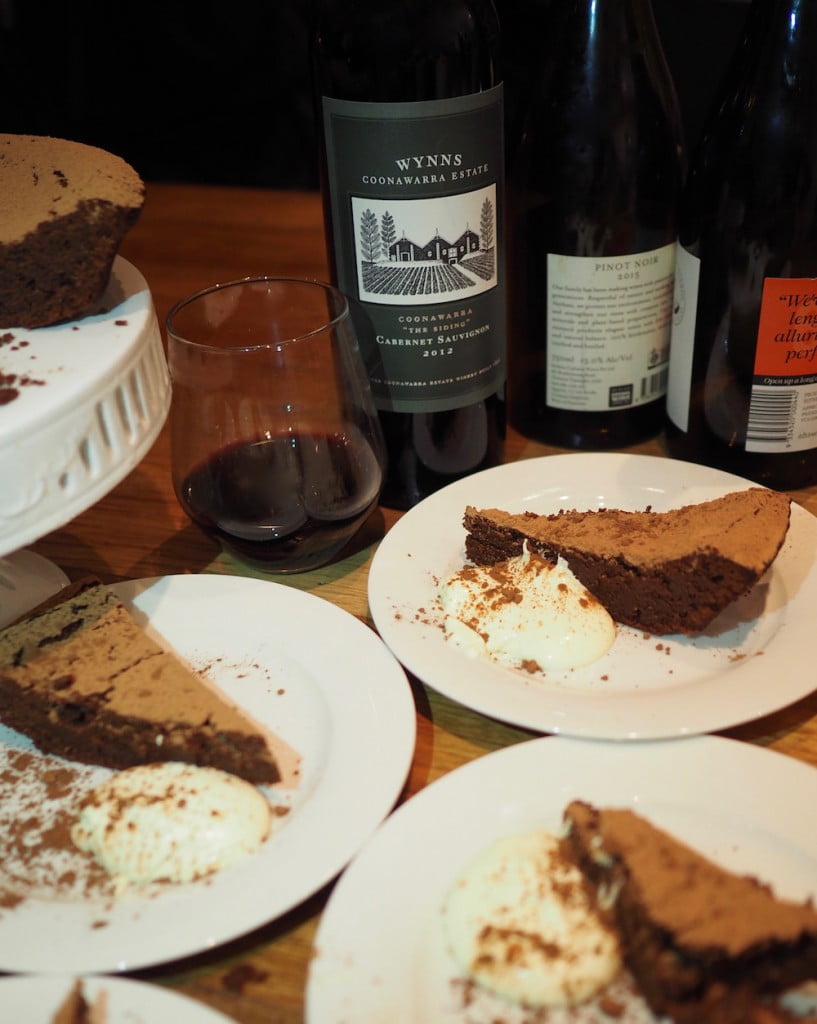 This post is brought to you in partnership with Dan Murphy’s. Thank you for supporting the sponsors that make Eat Drink Play possible.