Royal Stacks Collins Street fires up the grill and turns up the beats for their very regal third birthday!

Proving that they deserve their crown as one of Melbourne’s most fun burger joints, Royal Stacks have celebrated the third birthday of their Collins Street location with a Catalina Wine Mixer themed event complete with a performance on Con te Partirò that would make Brennan and Dale proud.

Already a Melbourne favourite for their regally inspired burgers and deliciously gooey cheesy fries and gems, Royal Stack have celebrated their coming of age with the addition of a new natural wine menu. It wouldn’t be the Catalina Wine Mixer without wine, would it? So now burger fans can have a glass or two of vino while you dine on one of their amazing burger creations and maybe even cap off the meal with a frozen custard – perfect for all you Kings and Queens of Summer!

Melbourne burger guru Dani Zeini is the brains behind Royal Stacks, where burgers named for the blue bloods fly out the door at a rate of thousands a week from their three Melbourne stores in Collins Street, Brunswick, and Chadstone. While menu regulars such as the Queen Bee, The King, and Miss Elizabeth are long term faves, fans eagerly devour their specials like the Royal Wedding inspired Prince Harry that had hungry Melburnians lining up to take a bite. While the Prince Harry has since retired, there’s plenty of delicious burgers on the menu waiting for a royal audience with you. 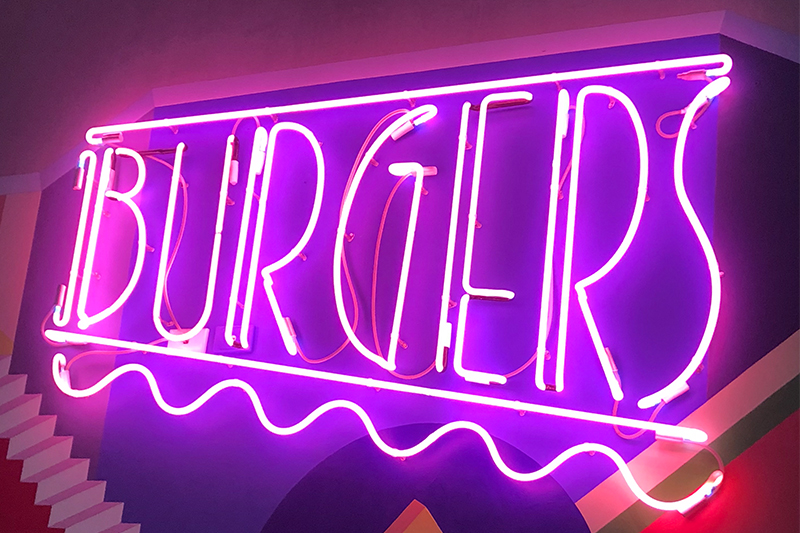 My favourite is the Miss Elizabeth and if, like me, you’re a li’l bit fancy, it will be yours too. Simultaneously straight forward but luxe, Miss E serves up delicious simplicity with a patty, Swiss cheese, and a rich and flavoursome truffle mayo for a haute burger experience.

Worried that something as delicately named as Miss Elizabeth won’t satisfy your empire sized hunger? Don’t be, because this little lady comes in a triple patty upsize. And given that this burger’s name wasn’t really inspired by Her Majesty, but was actually named for Zeini’s childhood crush, Queen of the Ring and Randy “Mucho Man” Savage’s better half, Miss Elizabeth, you know this one is gonna pack a punch.

If you’re looking for a real mammoth of a burger, you can’t go past The Saint. With two patties, bacon, jalapeños, chipotle mayo, and good ol’ reliable lettuce, tomato, cheese, and onion, this is one for the burger connoisseur. Pair it with Royal Stacks Mac & Cheese croquettes and you’ve got a meal fit for a king – or queen.

This summer, escape the heat of the city and duck into Royal Stacks for a wine and a burger and you’ll feel like royalty.