My friend’s face has turned bright pink on the streets of South Yarra. I’m confused for just a second before the soft glow of a neon “rock hand” sign lures us into a bar and restaurant called Rock Sugar.
A mirrored palm tree hangs over diners near the kitchen at the back while tubs of coloured fairy floss are stacked up behind the bar; a key ingredient for one of the must-try “Rocktails” on the drinks menu.
The white exposed brick walls, black light fittings and touches of greenery work well with the loud neon signage to create a modern and fun space that doesn’t take itself too seriously. 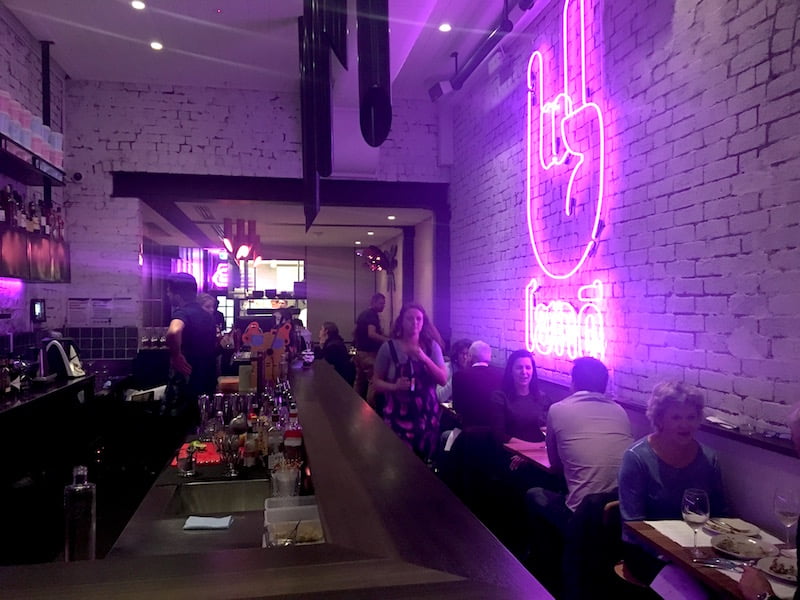 Buzzing with the lively chatter of the after-work Malvern crowd and friendly staff, the atmosphere is warm and happy.  Late guests who appear familiar with the bar staff stop by for an after-9 drink, hinting that Rock Sugar is an appealing spot for locals.
Front of house manager Simon Tammeslid (previously at Mr Miyagi) tells us they’ll soon be opening a 45-seat licensed courtyard out in the back. Diners can enjoy the Rock Sugar culinary experience al fresco in summer dining and it’ll be available for private functions.
My dinner date, who has regained a natural colour to her cheeks, and I are shown to our seats.  A friendly staff member takes the time to discuss the menu with us and shows a genuine enthusiasm for specific dishes.
Forgoing alcohol for the evening as the designated driver, she suggests the Thai Basil Smash as an excellent mocktail. And she is right. Coconut water, Thai basil and lime – which is usually served with gin – comes to me in a cute little bubble cup. It’s refreshing, delicious and not overly sweet. Look out for the cool bubble cup machine that’s on the bar.
My date orders the Tamarind Sour, a blend of tamarind, bourbon, citrus and egg white, and we both agree that any kind of ‘sour’ is high on our cocktail list. Her delighted face and the ‘mmmm’ noises she’s making tell me this one’s a hit. 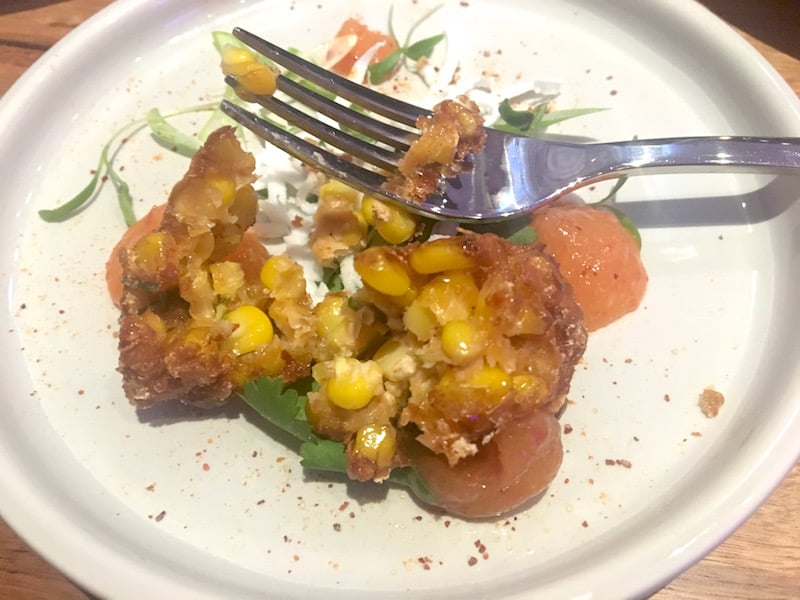 The menu is an exciting mix of familiar dishes made with interesting ingredients and progresses from lighter to heavier options.
The Singles menu is a selection of the smallest of dishes that are mere mouthfuls suitable for one person. We try the smoked ocean trout betel leaf, kaffir lime, chilli, coconut, roe and the corn cake served with sweet nam jim, coconut, and kaffir lime.
Both are winners. The smoked trout is soft and pink and balances well with the chilli and coconut. The corn cake is crispy and savoury and I could easily eat another few. Next time…(yes, I already know there will be a next time).
There are nine small share plates to choose with an enticing selection for the vegans, pescatarians and devout meat lovers. The staff recommendations include the 14-hour beef flank, tamarind nam jim, pickles and chilli salt (3 pieces) but some other dishes catch our eye.
We try the saltgrass lamb spring rolls with massaman coconut cream which are delicious crispy parcels with zesty little fresh peppercorns on top. But it’s the fried chicken ribs, red nam jim, lemongrass, chilli caramel that make me salivate. Flavoursome, crispy-skinned and tender, the savouriness of the chicken and the sweetness of the nam jim (the Thai name for a dipping sauce) gets a well-deserved head nod and some finger licking. 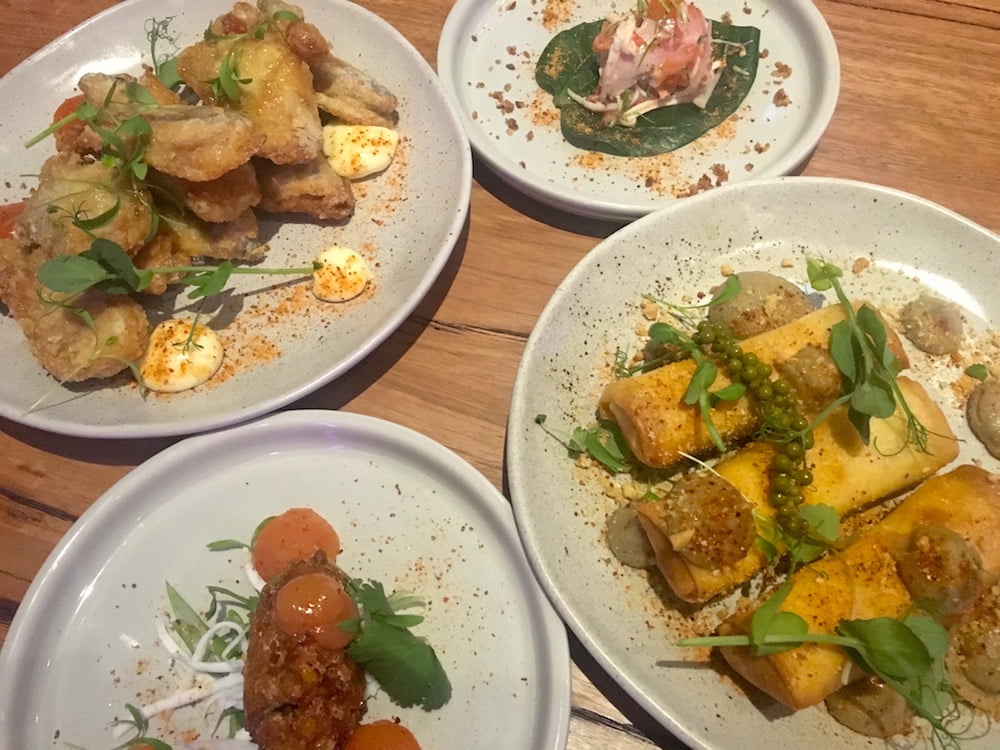 While we’re awaiting the large plates, my date takes a look at the Rocktail menu and orders a blue Fairy Floss Martini, mainly because we’re curious about the presentation of said drink.
A few moments later a generous pile of blue spun fluffy sugar sitting solo in a martini glass arrives, along with a cylinder of the vodka, lemon and citrus mix for us to pour over it. It’s quite the show watching the blue fairy floss melt into the martini mix, resulting in a perfect bright blue Rocktail with a lemony-kick! 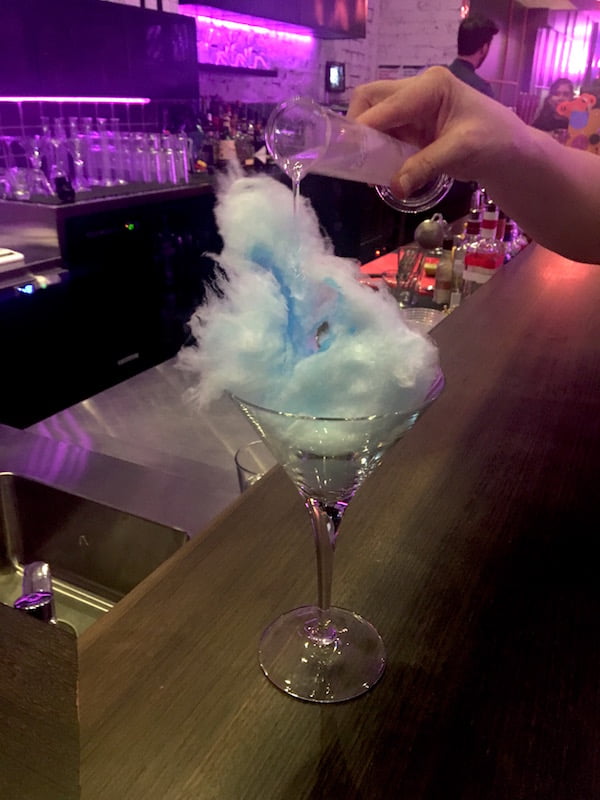 A hot bowl of massaman curry with 18-hour beef shin, peanuts, potato. coriander and pickled shallots arrives at the table along with some jasmine rice. Aromatic and fresh, the shallots marry beautifully with the sauce and the deliciously tender beef shin.
Other standout dishes on the menu include the large share dish of pork belly, nam prik and pepper caramel which has been mentally added to the list to try next time.
There are three offerings on the dessert menu. The spiced doughnuts, pandan cream, chocolate, lime sorbet, peanut sesame salt has my name on it. The dough-to-fluffy ratio of the doughnuts is perfect, and the green padan cream hidden inside has a nice custardy texture. 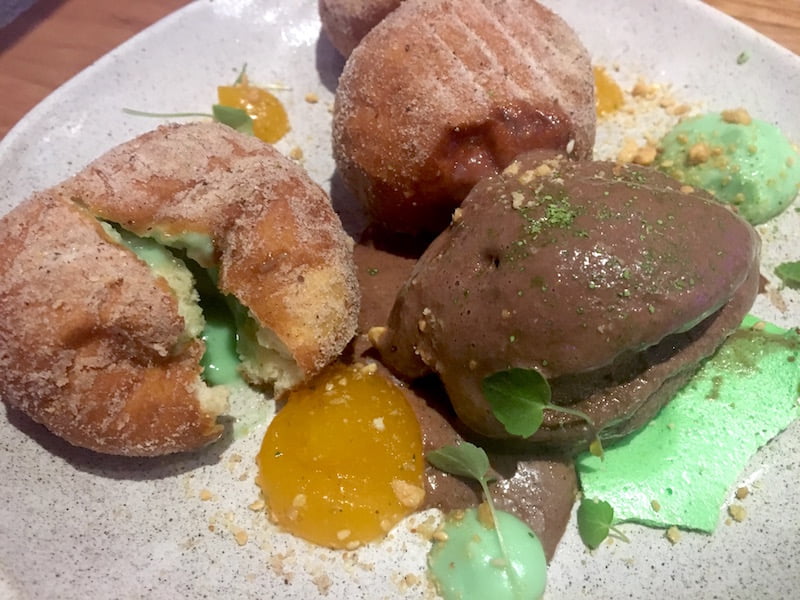 With seasonal flavours and new dishes added to the menu as the year rolls on, Rock Sugar has a lot to offer locals and those looking for a dining experience with a difference. We salute you, Rock Sugar, with our rock hands in the air!
Rock Sugar
477 Malvern Road, South Yarra
Wednesday – Sunday 5pm until late
www.rocksugar.com.au