Every dish tells a story at Lello Pasta Bar

“It’s really a weed. It grows everywhere.”, Lello head chef Leo Gelsomino tells us as we dig in into his wild fennel ice cream in the cosy Flinders Lane restaurant. It may be a weed, but in the hands of Gelsomino, this little weed has been transformed into a delicious quinelle of ice cream perched atop a bed of rhubarb, and dotted with chestnut crostini and caprino – a type of goat’s cheese. A keen forager in parks and gardens, he knows the stories of all the ingredients and dishes at Lello, some of which are centuries old.
Lello Pasta Bar is the evolution of the famous Yak Italian Kitchen and Bar, another brainchild of Gelsomino, refreshed and rebranded with a strong focus on traditional dishes and techniques. Located in the heart of Flinders Lane, tucked away amongst the haute couture powerhouses of Gucci and Chanel, it’s perfect for a post-shopping recharge, a business lunch, or pre-theatre dinner. 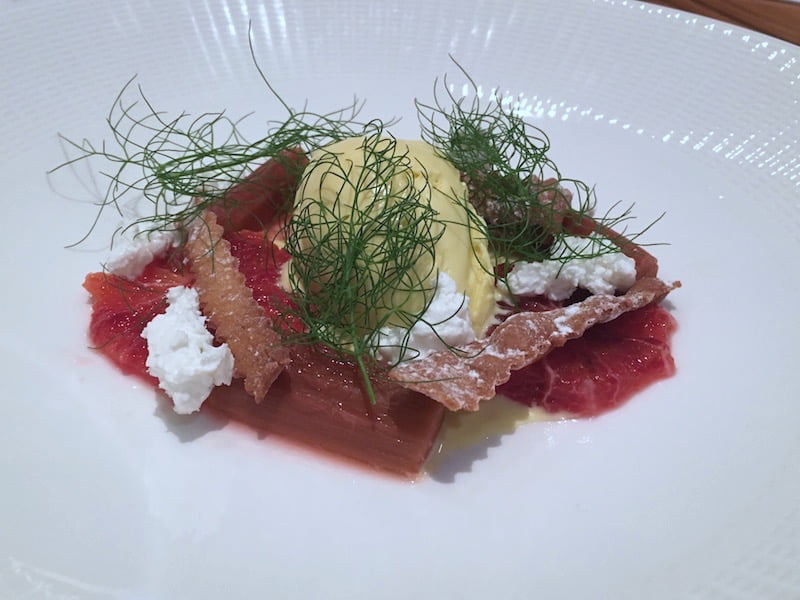 In a city like Melbourne, where Italian migrants have laid down roots for decades, a pasta restaurant has to be pretty special to set itself apart – and Gelsomino manages to do just that. From the casarecce formed around knitting needles, just like Nonna used to make them, to the pasta extruder custom made and shipped over from Italy, Lello is the real deal. Using fresh, local ingredients – and a whole lot of Italian spirit – the menu is packed with exciting and delicious dishes from the various regions of Italy.
While the food is undoubtedly the star of the show at the new restaurant, Yak’s influence is still felt in the artfully curated bar that gained the former venue a loyal following. With offerings from all over Italy and Sicily available, the knowledgable staff are more than happy to recommend pairings to perfectly complement dishes.
The restaurant itself is both cosy and classy, and is the perfect perch to watch the world go by while digging into some seriously good pasta.

I had the pleasure of attending the restaurant launch, and was lucky enough to sample a number of dishes from the revamped menu. I was delighted to be introduced to the culurgiones. Playfully described as ‘ravioli’s chubby cousin’, and stuffed with potato, mint, pecorino Sardo and lemon zest and then scored to resemble a grain of wheat, the culurgiones are little parcels of Sardinian history. Paired with Novamenti Rosato, a wine made from the dark-skinned negroamaro grape that straddles the line somewhere between a rosè and a red, and served atop a bed of salty, garlicky broad bean pesto, these culurgiones are the comfort food you never knew you needed in your life.
The arso flour based Casarecce Cacio E Peppe was another crowd pleaser, and another trip into the history books of Southern Italy. The dark wheat pasta is made using grano arso – or burnt grain. A staple for the pastoral workers of Puglia, the flour was born out of the cucina provera, or “cuisine of poverty”. When the wheat harvest season was over, and the fields had been torched to start anew for the next season, the peasants tending the field would collect the burnt kernels left behind and mill them for use, creating a dark and nutty aromatic flour.
Nothing is wasted in Italian cuisine, and all food is cherished. Lello respects this history of resourcefulness and simplicity, serving the casarecce with an emlusion of butter, pecorino, and cracked pepper to create a dish that is flavoursome and comforting.
If you’re in the mood for some classic Italian cuisine, pull up a seat at Lello Pasta Bar. It really is classic fare, done simply and done well.
Lello Pasta Bar
150 Flinders Lane, Melbourne
Open 7 days, 7am-10pm
www.lellopastabar.com.au