Sydney’s favourite light festival is back and it’s starting this Friday May 24th. Once again, Vivid Sydney will transform our Sydney city into an enchanting canvas of light, music and ideas.
Highlights of the event include immersive light installations, music and Vivid Ideas Exchange. If you’ve never been to Vivid (shame on you), you’re going to want to check out this guide. Print it off, stuff it in your bag and take it with you when go so you don’t miss the best Vivid Sydney has to offer.
It ends on June 20th so for the love of all things colourful and bright, don’t miss it! 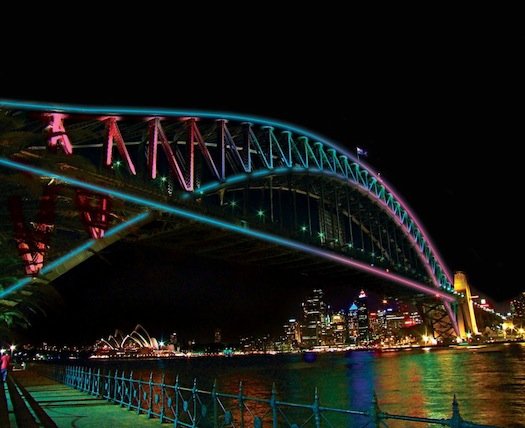 Here’s a riddle: What can you do with 272,000 litres of paint? Ok, you’ll never guess it. The answer is paint the Sydney Harbour Bridge! With the absolute latest interactive lighting technology, you can choose your own section of the bridge to light up and watch your master creation come to life. The Bridge is stacked with over 100,800 energy-efficent LED lights. Painting the roses red is so last century. This year, we’re painting the Harbour Bridge red! Or blue, or green or yellow or whatever takes your fancy.

For the first time, Sydney’s Darling Harbour is officially part of the Vivid Sydney footprint. And to mark its new position, Vivid is presenting ‘Vivid Aquatique,’ an immersive water theatre which combines a 20 metre wall of light, colour and music, all inspired by the fountains of Versailles – how very French! It’s the first time a show of these proportions has been created in Australia, definitely not one to be missed. 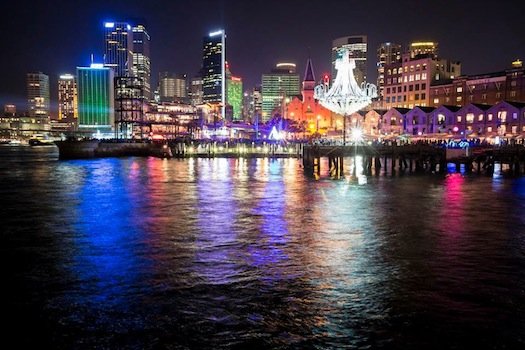 Be swept away on an enchanting journey through a spectacular world of colour, innovation and design. This family-fun event happens every night during Vivid Sydney from 6pm to midnight. Start your light journey at Fort Denison and continue onto the boardwalk of the Sydney Opera House, witnessing mesmerising projections that transform the iconic sails. It’s the perfect way to experience all the beauty and creativity that Vivid Sydney has to offer. 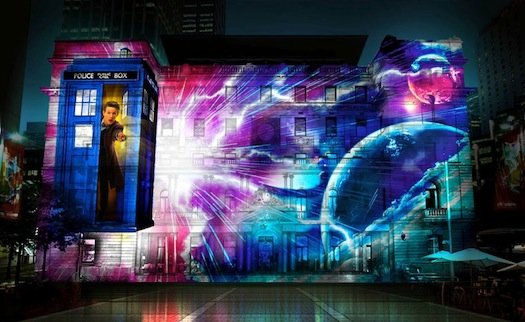 If you’re a Doctor Who fan (and let’s be honest, who doesn’t have a streak of sci-fi love in them) don’t miss this light display. To celebrate the 50th anniversary of the BBC series Doctor Who, Vivid Sydney is putting on a special display for one night only. Watch Doctor Who and his Tardis travel through space and time in a stunning display on Saturday 1st of June from 6.50pm. True Doctor Who fans won’t be missing this free light and sound show at Customs House Sydney.

One of Australia’s oldest buildings situated in The Rocks, The Argyle, is playing host to an incredible night of live music and light displays, ‘Illuminati.’ On the 8th of June only, head over to The Argyle for a big line-up of Australian DJs including Jonti, Cassian, Wordlife, Gloves, Elly K and Dublin Aunts. Free before 8pm or $20.

If you love all things Aussie and also happen to love quartets, you’re going to love the Ampere Quartet. It’s Australia’s first and only electric guitar quartet, featuring Zane Banks, Matthew McGuigan, Matt Kurukchi, Jy-Perry Banks. The program features new work by Julian Day and the Australian premier of “Spine Reaction” by Malin Bang. Expect some drone music to be included, which can only be described as loud and ear-bleeding! General admission $30. Concession $20.

On the 2nd of June, you’re invited to Club Kooky’s 18th birthday bash! You may remember them from two years ago where they were last seen at Vivid Sydney for their 16th birthday celebration. This year as they enter their adult years, Sydney queer institution Club Kooky is holding a massive party, featuring artists such as Aerea Negrot, Kim Ann Foxman and Shaun J Wright. $35 entry.

Who remembers the chocolate machine at the Powerhouse Museum where you learnt about the process of chocolate making and your choice of chocolate chips would come out from the computer? Sounds strange, but it definitely happened. And now, the Powerhouse Museum is bringing chocolate to you again in their ‘Eat the Collection.’ It explores the interaction of design, food and technology, all in chocolate. This ideas event at Vivid invites designers to search through the museums’ online collection for inspiring objects and content which is then designed into a 3D chocolate object, exhibited at the Powerhouse Museum’s Late Night Lounge event. On the 30th May, from 6pm-9pm. General admission $15. Concession $12.

Vivid’s Reportage Festival is a massive celebration of the visual narrative, attempting to raise awareness of documentary photography and the messages created through the medium. Reportage Festival also attempts to support artists by delivering unique workshops. It features immersive outdoor projections of photographic works on the Vivid Light Walk and talks and workshops from the world’s leading documentary photographers.It’s a free ideas event and is running from May 24-June 13.

Calling all musos and music fanatics! If you’re keen on making it in the music industry, this is one event you just can’t afford to miss. Vivid Sydney is presenting Feedback, an all day music conference aimed at 12-25 years, featuring insight from artists and music industry professionals. Feedback is the perfect combination of entertainment, inspiration and insight. It’s running on the 10th of June from 9.30am-5pm. General admission $20. Indent team members $15.
To see what else is on during Vivid Sydney head to http://www.vividsydney.com/