Redfern has been through a process of gentrification in recent years, and is no longer the slightly-dodgy suburb you may remember from the early nineties. According to a short letter written to the Sydney Morning Herald in January of this year, there has been nothing but positive responses to changing face of the arts, cafe and bar scene in Redfern. It’s becoming a magnet for students and the young-at-heart, and there are more positive changes planned. I recently went on a tour of Redfern with City of Sydney and here were my highlights: 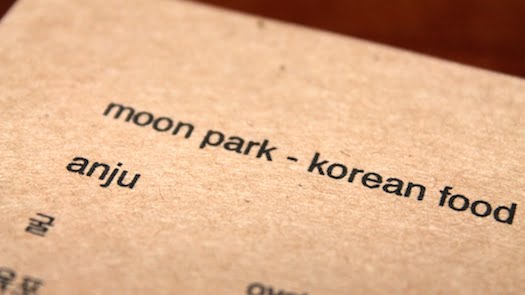 First up was Moon Park – a little restaurant above street level that serves modern Korean cuisine. It’s one of those restaurants that thrives on word of mouth advertising – people stumbling out the doors with full bellies and nothing but praise for the food rake in business better than any advertising. And they must be doing something right, because since they opened their doors in November, three other Korean restaurants have sprung up in the same zip code. 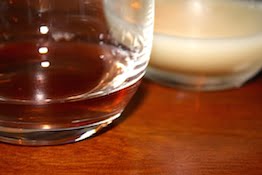 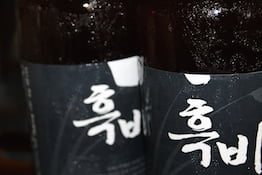 If you’re going to Moon Park I suggest you order the Ddokbeokki (pronounced de-bo-ke)- deep fried rice cakes rolled in chilli paste and crushed peanuts that deliver quite a kick to the mouth. And the pork belly ssam – it’s definitely the best modern Korean food I’ve ever had. 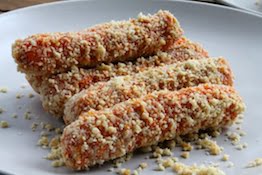 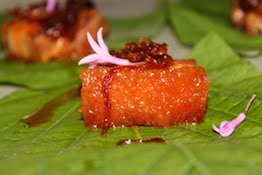 Also wonderful was the salt biscuit with clam, which slides down your throat in an incredibly disconcerting way before leaving a fabulous seafoody aftertaste. Sassy chef Ben, who found the venue for his restaurant on Gumtree, says that his food is the culinary edge of Redfern, and I agree with him. 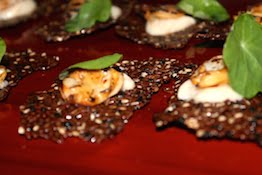 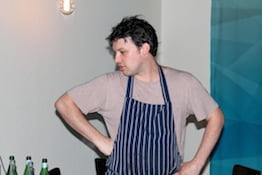 The Tapeo Bakery is snuggled into the corner of Chalmers and Redfern, and is responsible for leading the change in atmosphere on the corner over the past three years. There’s nothing like having dessert for breakfast, and the display of cakes waiting for us when we got there made my mouth water even before I tried any. The organic coffee accompanied them to perfection.

Talented French Chef Alexandra isn’t up for giving away any of her secrets, but she does have an enthusiasm and passion for baking that is infectious. It’s joy to hear her talk about her work. And yes, they do birthday cakes- large ones. 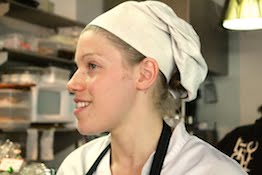 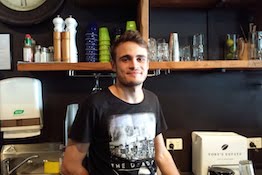 My only regret is that we couldn’t eat everything, despite encouragement from the charming owner Lior. He explains the cafe’s emphasis on fresh, organic produce and the importance of having a place for the locals to call a home away from home. People come in for the relaxed atmosphere and friendly staff, as well as the brilliant food and coffee. 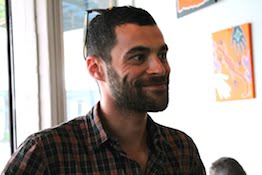 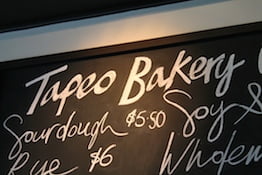 Mickey’s Deli and Mickey’s Fruit & Veg started as a small business with two people, and has grown to a double-storefront with a team fifteen-strong. They supply over sixty cafes and pubs in the Redfern area, so you’ve probably eaten their terrific fresh produce even if you’ve never shopped with Mickey himself.

A haven for those seeking an eclectic collection of pre-1950s antiques, oddities and knick knacks, Seasonal Concepts is Charles Dickens meet Pimlico Road. Also a fully functional florist, the store is packed to the brim with everything you didn’t know you wanted. It’s a complete treasure trove, and stepping into it makes you feel like Alice in Wonderland. Owner Ken sourced most of his stock from right here in Sydney, and operates the store under a “what’s next?” motto. 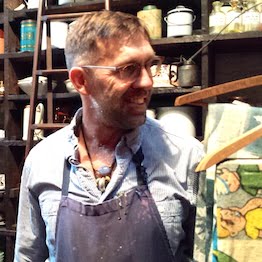 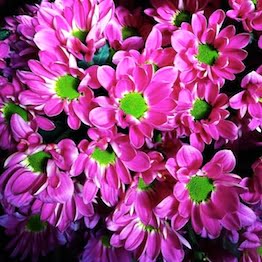 Nostalgia shoppers can can find that teapot or the cutlery than grandma had back in the day, and collectors of rare vintage anything can shop to their heart’s content. The shop’s been there for six years, and it took eighteen months to collect enough to create the sensational ambiance browsers enjoy today. 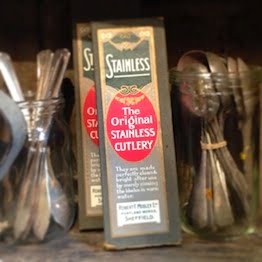 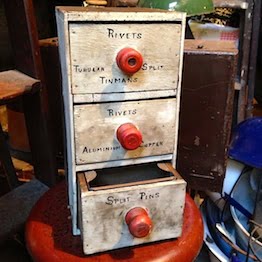 Recycling is not a new pursuit, but it reached new heights during the Depression era, when people salvaged anything the could to save money. Much of the store’s contents is item from the 1940s that have since been refashioned by contemporary artists and sculptors, like a beautiful set of crystal classes from the 1930s that have been made into transparent flowers. 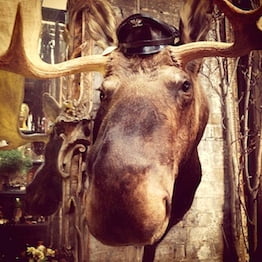 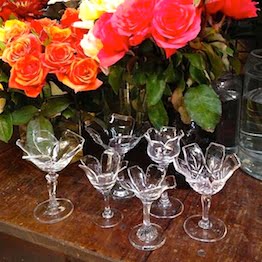 The Sydney Story Factory is a place for children to develop their love of words. Volunteer tutors offer free, one-on-one help with English homework and any writing project a child can imagine.


The centre is located in Redfern, and children arrive at the centre via a fantastical shop, the theme for which is now under consultation with kids. Whatever they decide on, everyday rules fall away. They enter a place where the imagination is without bounds, and the written word is more exhilarating than a narrow escape from the Boogie Man. The storefront is the Martian Embassy, where children can buy their outer space souvenirs and intergalactic passports. 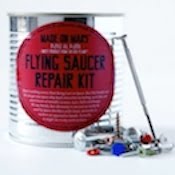 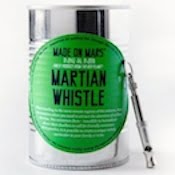 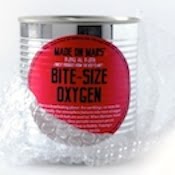 And it’s run by the happiest, most enthusiastic 600 people in Redfern. Anyone can volunteer, as long as they love working with children, and can work anytime and any day that suits them. The Sydney Story Factory is the pride of Redfern and should be at the top of the list for people sightseeing the suburb. It was definitely my favourite stop of the tour. 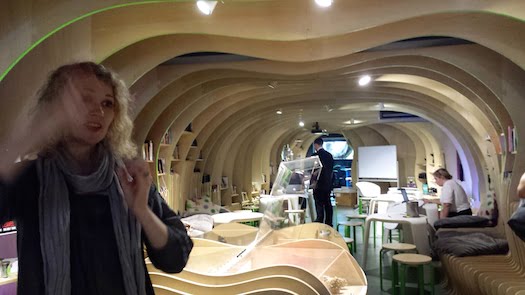 As a die-hard Roosters fan, I was internally struggling as I made my way up Redfern St to the Park Cafe on Chalmers. Home of the South Sydney Rabbitohs, the Redfern Oval backs onto the Park Cafe, which has some of the best coffee east of the Bridge. You can watch the Rabbitohs train any day you like – they have completely open practice sessions and are one of the most beloved teams in the League. 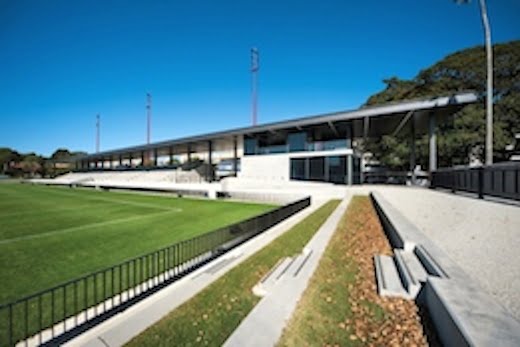 But it’s the social and community outreach of the team, called Souths Cares, that makes the team popular within its home suburb. Souths Cares caters for any at-risk youth between the postcodes 2000-20034. Redfern Oval is the heart of South Sydney, and Souths cares has over 130,000 supporters in the area. Rabbitohs players go to public schools in the area every week to be teachers’ aides for the Youth Literacy Program. They promote everything from living an active lifestyle, to oral health, to finishing the HSC. Souths Cares is dedicated to helping Indigenous children by incorporating parts of their own culture within their program. Last year, the HSC program had an 89% completion rate. 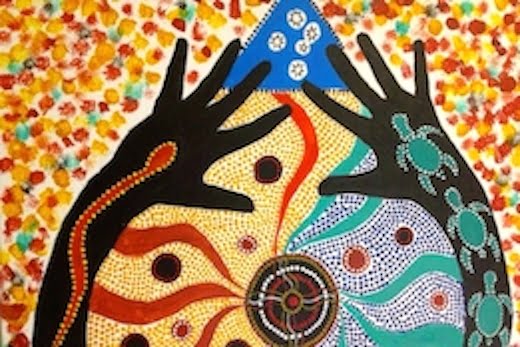 The Rabbitohs use NRL as a vehicle to push kids in a positive direction – and gives them free membership to the NRL club. As the kids’ heroes, the players – like Tom Burgess, who talked to on the tour – use their power for good and motivate children who otherwise wouldn’t finish school.