There has been much written about The Oxford Tavern since it reopened last month. Yes, it was previously a “gentleman’s club” of sorts. Yes, there is a stuffed bear mechanically stirring a mixing bowl behind one of the bars. And yes, this revamp is thanks to Drink ‘n’ Dine, who have removed the pokie machines along with the scantily-clothed ladies, but have not forgotten the origins of this (in) famous premises in the inner west. 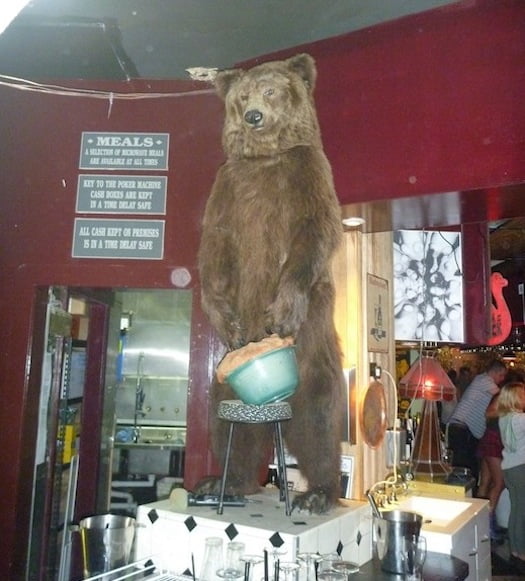 As such, the food, drinks and décor all consist of a bit of the old with a bit of the new. Food-wise, pub staples still play a key role on the menu, but each with a little twist. Think a seriously juicy cheeseburger with pickle, ketchup and mustard… then reduce it to a snack size for $5. Hot chips don’t need to come with salt, they may also be delightfully smothered with sour cream, bacon, green onions and sriracha (my pick) or chilli mince, nacho cheese and jalapeno. And a schnitzel can be topped with a variety of interesting blends beyond the traditional parmy. “Plenty of other pubs are doing that”, you say. Yes, but the Tavern also offers a schnitzel selection – chicken or eggplant. Can I get a yee-ha from the vegetarians amongst us please?! Make it louder when you hear that all salads and hot “dawgs” are available with vego-friendly options too.


Then there are the food items that you are less likely to find on the menu at your local pub (unless you are fortunate enough for it to be another Drink ‘n’ Dine venue such a The Carrington, The Norfolk or The Forresters). Tacos including the baja fish with guacamole, pica de gallo and mojo rojo are $5.50 each (or $3 on Wednesdays) and for those of you who prefer your protein wrapped in lettuce, the chook san choy bow comes with green mango, peanuts and salsa mojo.


The best word to describe the drinks list is fun. The Swinging Tit shot (spiced rum and jelly foam) is a toast to The Oxford Tavern of days gone by, while the BBQ Margarita (tequila, BBQ pineapple, agave, lime and smoked salt) is a novel take on a classic cocktail. Be sure to sip your way around the whole darkly-dipped rim for full effect. Other drinks such as the Bloody Porto and Crystal Street Hurricane jug pay respect to the pub’s proud home – both suburb (which is also known as the “Little Portugal” of Sydney) and intersecting street. 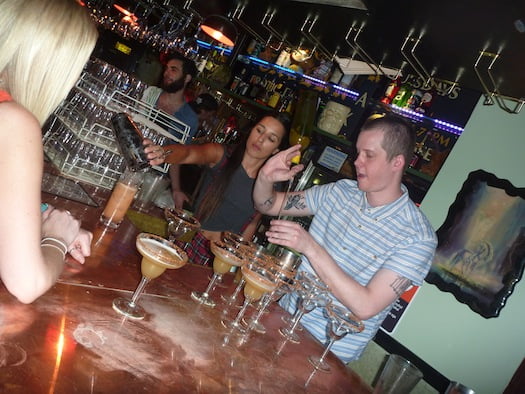 The Oxford Tavern is a relatively large establishment, which enables there to be a variety of drinking and dining backdrops for you to choose from. Each has its own drawcards. Perhaps you’d like to sip on schooners of Kosciuszko in the front bar with its array of random objects (how about a bright leopard next to an old lampshade and life-sized piano, all under an oversized disco ball?) with an extensive selection of spirits in front and neon female silhouette signage behind (there’s that mix of new and old again). Or maybe you’d like to throw back your tinnie of Moritz in the beer garden out back. Starting on Australia Day  there will be a BBQ out here offering an assortment of meaty goodness from the Tavern’s custom steel drum smoker every Friday – Sunday each week. There are also pool tables, a photo booth, THAT bear and late night spot Rita’s Gaming Lounge, with no Rita or gaming in sight. 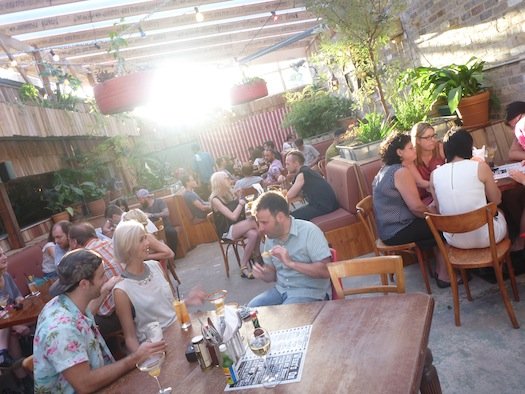 The meandering between the old and the new is what makes Drink ‘n’ Dine’s first foray into the inner west such a success. The Oxford Tavern of old had a reputation (good, bad or otherwise) and although The Oxford Tavern of new is far more approachable for a greater variety of locals and curious visitors.