Turning Thai Cuisine into a sandwich at Scout’s Honour

Scout’s Honour put, what, in a sandwich?
It’s difficult to remember a time before Australia’s great love affair with Asian cuisine began. A time before Thai restaurants with pun names (“Thai-Tanic” is still a favourite) sat on every suburban shopping mall corner. A time before laksa, banh mi and xiao long bao were as common as peas, pies and potatoes. A time before the modern Asian sandwich.
Not satisfied with enjoying Asian cuisine in its traditional form, the sandwich world has embraced the flavours of the Orient to create some incredible fusion fare. For example, the beef pho sandwich from Sunny and Annie’s Deli in NYC, which can only be described as the greatest merger of East and West since Chan and Tucker kung-fu kicked their way to stardom.
Closer to home, Scout’s Honour in Redfern, an unassuming venue hidden behind a metal roller door, has continued this trend, with an amalgamation of South East Asian dinning and Inner west baking. The larb gai ciabatta. 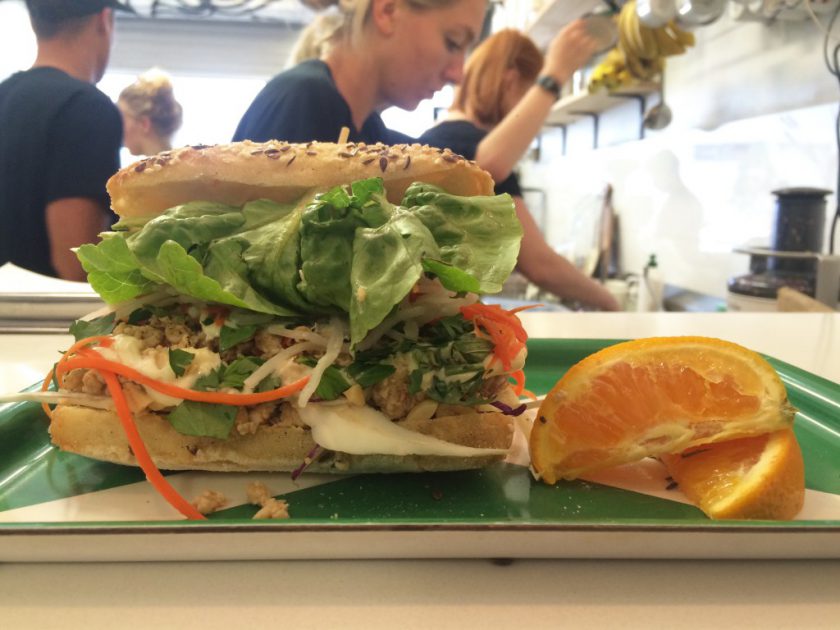 The sandwich, with all the hallmarks of Thai cooking – sweet, sour, salt, bitter and spice – is outrageously aromatic. It is also outrageously large for the modest price of $10 (+ $2 for avo). The chicken and pork mince, cooked with lemongrass, roasted rice, red onion, lemon and chili, is fantastic. Wafting smells of the mince transport me back to nights in the magnificent Chang Mai markets, one of the few exotic destinations that is absorbed through all five senses.
The gentle spiciness of the mince is counteracted by a thick dollop of deliciously creamy mayonnaise and the tangy bite of pickled daikon and carrot. The additions of mint and coriander injects a new level of freshness into this innovative masterpiece, whilst shredded cabbage and butter lettuce adds colour and weight. Finally, the competing textures of diced peanuts and optional avocado provide the crunch and smoothness to perfectly balance this sandwich.
Scout’s Honour put a larb gai in a sandwich, and we don’t want to remember a time before they did so. What will they think of next?
Scout’s Honour
118 George St, Redfern
Open Mon-Fri 7am-3pm and Sat 8am-1pm
https://www.facebook.com/scoutshonourredfern/
Written by A Man and His Sandwich
instagram.com/a_man_and_his_sandwich/
www.facebook.com/amanandhissandwich