A challenge has been set and we are the lucky ones that get to taste the rewards! The cool, boutique hotel QT has opened in Bondi. To celebrate their arrival in Sydney’s iconic suburb, they challenged Gelato Messina to create a bespoke ice cream flavour that encapsulated the essence of Bondi.
Gelato Messina– known for their hilarious pop culture references and ridiculously cool creations with ice cream- was obviously up for the challenge. To salute Bondi’s legendary laid back lifestyle and love of anything trendy and healthy, they’ve created the Coconut and Quinoa Sorbet, which totally speaks Bondi don’t you think? 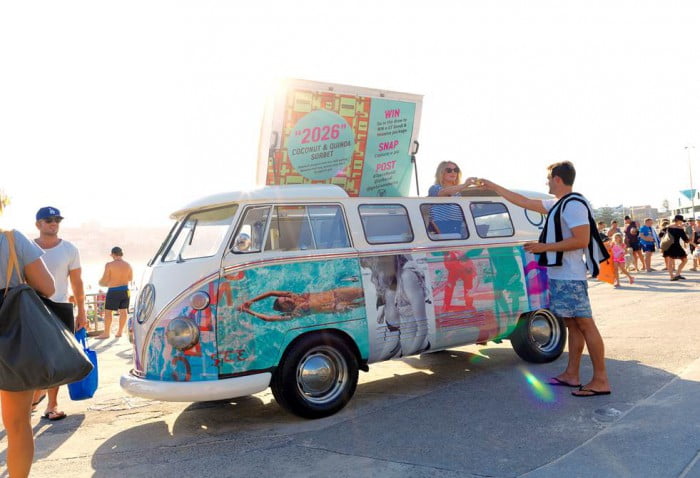 Don’t worry, the quinoa is only in the choc block, with the sorbet made of roasted coconut and rice milk, and topped with Messina trail mix and yoghurt gel. They’ve dubbed it 2026, the postcode of Bondi.

Want to get a taste? QT Bondi will be sharing the ‘2026’ flavour at a series of tastings out of a custom-made ice-cream kombi, that will be cruising the streets of Bondi. It’ll be popping up at key locations on Saturday 16, Sunday 17, Sunday 24 and Australia Day, Tuesday 26 of January 2016. Two of the prime sampling spots are; Bond Farmers’ Markets and The Bucket List. On top of that, each QT Bondi guest will be offered a complimentary serve of “2026”, as a welcome gift throughout the month of January.
Share your experience on Instagram with a chance to win a QT Bondi and Messina Gelato workshop experience! Simply post a pic and tag #TasteBondi @QTBondi @GelatoMessina for a chance to win.