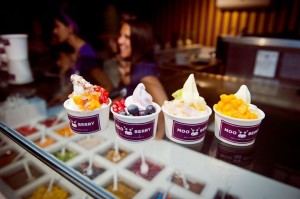 The dolled-up crowd were all checking their hair and perfecting their make-up when I arrived at the Moo Berry Neutral Bay launch. They needn’t have bothered. Plain, chocolate, strawberry and coconut – it didn’t matter. Everyone’s lipstick was completely gone by the time we finished slurping our first round of frozen yoghurt.
Chatting to Miss Universe Australia in the yoghurt line meant the photographers were jostling to take pictures. I only wish they weren’t dong it while I had yoghurt sliding down my chin.
The first thing I noticed was that whoever designed the tight t-shirts for the female staff is nothing short of an advertising genius. There’s nothing like reading the name of what you’re about to eat written across a pair of perky breasts to whet the appetite. Especially when the band is booming out “Get Lucky” from the second floor. 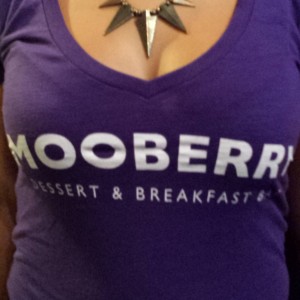 At the moment, frozen yoghurt seems to be the new black, but Moo Berry’s frozen yoghurt stands out because it’s not just glorified soft serve – you can actually taste the yoghurt. It’s like eating ice cream without the side serving of guilt. My enjoyment of my Moo Berry yoghurt was greatly enhanced by the band playing a cheeky cover of ‘What’s Your Flavour?’ Every so often, the singer would pause, grab a passing girl in a tight dress and serenade her; “Tell me what’s your flavour? Ugh!” 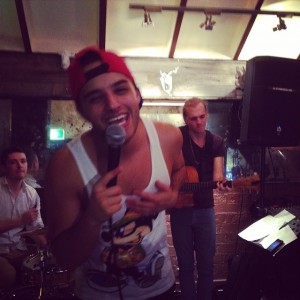 The Patron espresso martini that made its way into my sticky hand after I’d inhaled my yoghurt tasted like what I imagine my morning coffee would taste like in heaven. And for the non-caffeine-addicts, there were roving trays of Elderflower Cider. I have absolutely no idea what elderflower is, but I think it’s my new favourite flower.
My first mistake of the evening was wearing stilettos – ‘triple-level emporium’ is not a figure of speech. By the time I tottered up to the third floor, which has a cosy, attic feel, the Sam Thai food was almost gone. Luckily, I found a half-hidden tray of prawn crackers on a nearby stool. They were so good that I couldn’t stop noshing until the tray was empty. And I’m Jewish. 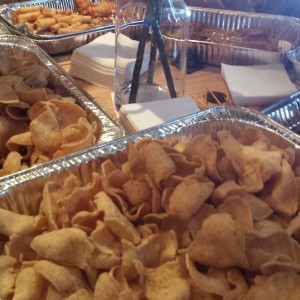 As I lurched back down the stairs, I noticed that moose heads decorated the grass-green walls. I put this down to an arbitrary sense of humour in the interior decorator, until I heard someone else say, “Get it? Mooo-se. Like mooo-berry.” 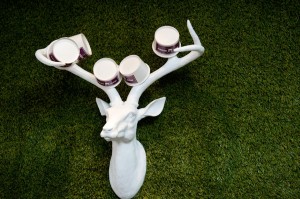 Needing some air, I fought against the yoghurt-crazed crowd on my way outside. Just as I made it into the sweet fresh air, a magician accosted me and before I could stop him, pulled a coin out of my hand. This led to a series of complicated manoeuvres that culminated with a coin down my cleavage. What a very bad night not to have worn a bra. 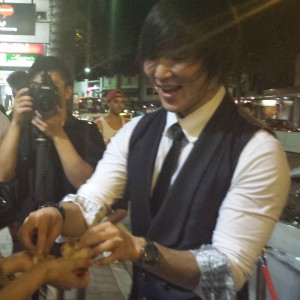 When I’d escaped the magician’s clutches, I chatted to Chloe, a cute little Moo Berry newbie. On her third shift, she’s not qualified to serve the yoghurt yet. Maybe she hasn’t perfected the twist-and-flourish motion that so impressed me when I was handed my yoghurt earlier. 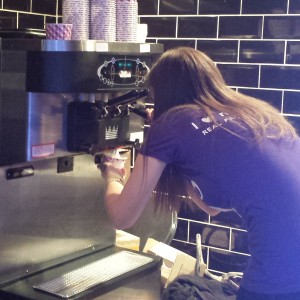 Outside Moo Berry, it’s easy to see that they’ve landed a fantastic location. Sandwiched between Sam Thai and the twenty-four hour Maisys Café, Moo Berry seems primed to take over the Neutral Bay late night munchie market.
The best part of the evening, though, was stumbling outside after one martini espresso too many and pretending that the beautiful suited blonde in the front seat of the gleaming white Porsche was my ride home.