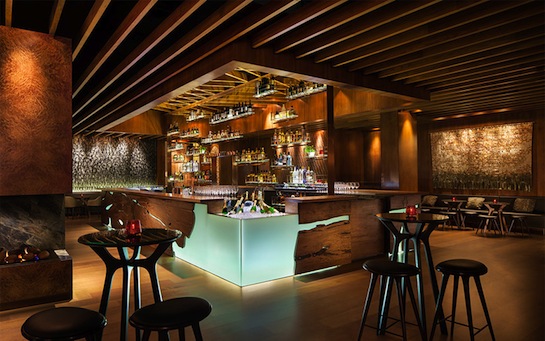 The Four Seasons Hotel in Sydney has opened a new bar called Grain Bar just in time for summer. With a separate entrance to the hotel you enter via George St, push past large timber doors and enter a modern, sophisticated space. No mis-matched furniture or long scruffy bearded bartenders await your arrival, this is a dive-bar free zone. Instead, a beautifully designed space by Michael McCann where wood is the key theme. You’ll find nine different types of wood used throughout the room and a striking island bar in the middle with a back bar layout like no other in Sydney.
Grain comes with a colourful background as do most buildings near The Rocks. It used to be the site of Australia’s first gaol and was where the first and last hanging in Australia took place.
You won’t find disgruntle ghosts nowadays, instead a carefully crafted cocktail list and local brews from The Rocks Brewery. The wine list  features a number of organic, biodynamic and sustainable wines from Australia and overseas. The Paloma cocktail gets my tick of approval so does the food from consulting chef  Hamish Ingham, of Bar H in Surry Hills.
Forget boring hotel food this bar menu has a boutique restaurant approach with unique dishes such as the native flora salt bush served as a deep-fried snack, steamed brioche with smoked trout roe and the kingfish tartare with pickled beetroot and seaweed crackers.
Grain embraces Sydney’s best assets with views of Circular Quay and the historic Rocks a stroll away. It’s a good looking bar without the pretension and predictability of hotel bars. Grain says “ummm we’re not in Melbourne, I don’t need to be dark, hipster cool and so underground cool you can’t find me. I won’t judge your suit after work, but don’t feel like you need to get all dressed up for little old me”.
Watch this space, the new Four Season’s restaurant is set to open mid-November.