Forget the deep fried whitebait and the greasy spring rolls. Trail blazer Nahji Chu has stepped out from her Miss Chu legacy and has taken on the yum cha game. Cha Li Boi Yum Cha & Bar is giving yum cha in Chinatown on a Sunday a run for its money by offering up daily (and nightly) yum cha with a healthy, quirky twist. 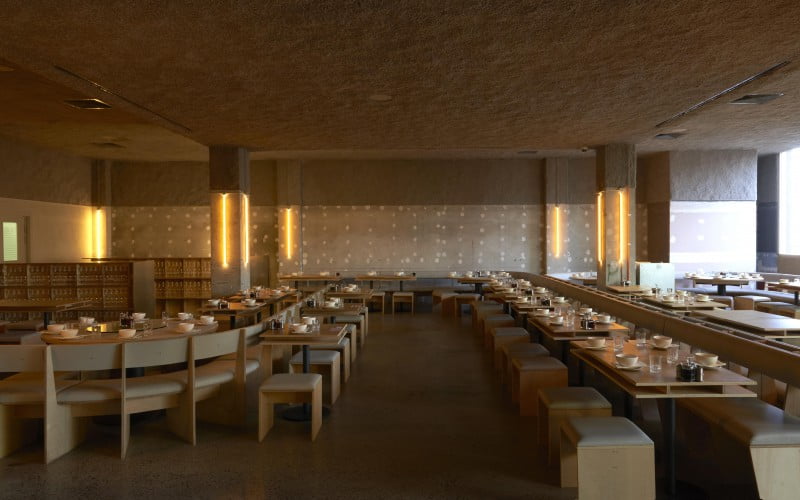 Upon entering the ‘new and improved’ restaurant floor atop the East Leagues Club in Bondi Junction, we start to notice the somewhat unorthodox interior of Cha Li Boi and argue over whether it’s deliberately bare and unfinished or if they ran out of time before the eateries grand opening. The walls are unpainted with a popcorn ceiling, the lights are exposed. It has a real empty warehouse feel to it.
Later, Chu tells us that the interior was a collaboration between herself and architect Anthony Gill, who decided to gut the entire restaurant floor and start from scratch. “The original space (Oriental Jewel Chinese) was old and beautiful, but really outdated. Lots of dust and quite generic, with Chinese lanterns and the like” spoke Chu of the space. “It was what everyone expects a yum cha restaurant to look like”.
While for the time being the interior isn’t competing with anything but itself, Chu says it will eventually evolve, with art, paint and other decorative features to be added. Right now you can even freely rent out a space in the back dedicated to weddings, birthdays – any event which calls for quality yum cha (or a quality banquet menu at $55 a head).
While the space may confuse some, it really does have the desired effect. It gets you talking but leaves you to focus on what Chu thinks are the most important factors of a dining experience – service, food, wine and conversation. 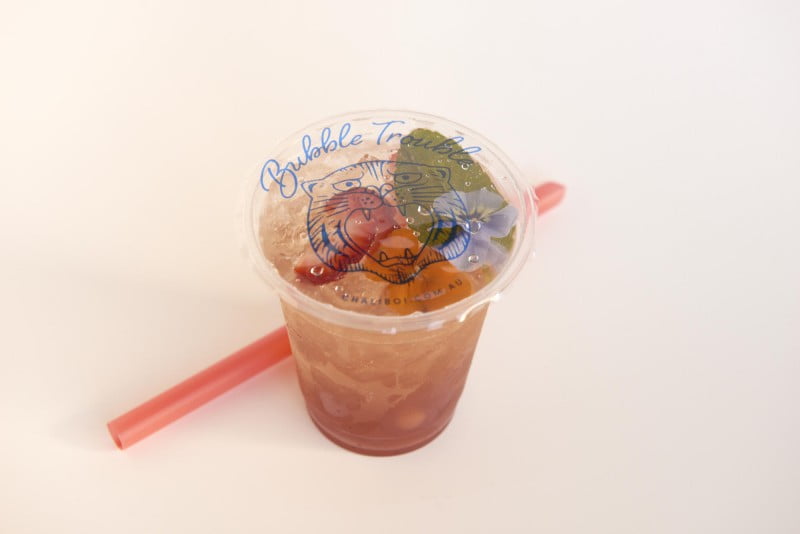 As our eyes scan the brightly coloured menus, we land on a page titled “Bubble Trouble”. Cha Li Boi serves up everyone’s favourite bubble tea but with an alcoholic twist. Still grasping onto the remnants of summer myself I order the Pimms Treasure Chest ($19), a concoction of lemongrass infused Tanqueray gin, raspberry liqueur, pink ginger ale, passionfruit pearls and fresh seasonal fruit. Unlike the pearls I usually have with my boba tea, which are somewhat chewy and jelly like, these pearls burst in the mouth and explode with passionfruit flavour. The lemongrass gin is refreshing and tropical. 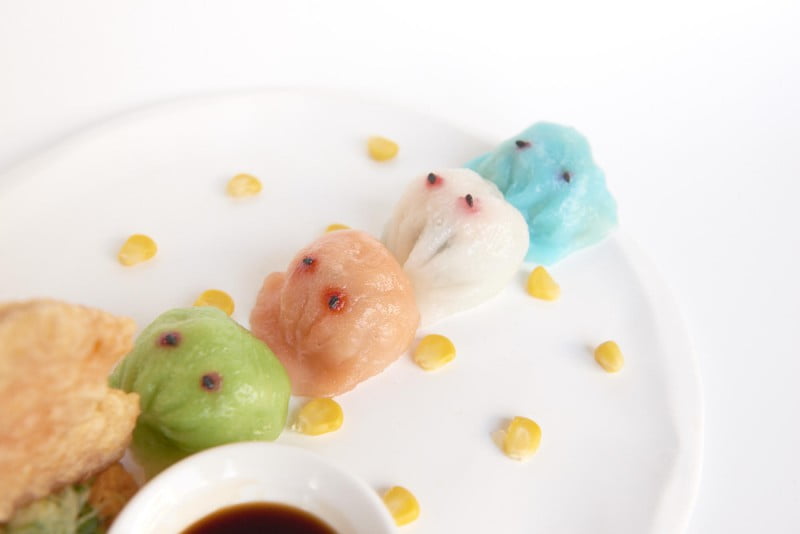 The raw and contemporary space matches the contemporary feel of the menu. Chu has tapped into the modern passion for clean eating, gluten free and vibrant meals. Most of the dumpling skins cater to a gluten free audience and all the produce is sustainable, originating from Australia.
The Pacman Dumplings ($16) envelope the healthy, gluten free and the fun. Four naturally coloured prawn dumplings play the ghosts from everyones favourite arcade game, while a tempura style piece of sweet potato acts as Pacman himself. The dumplings are tasty, simply prawn har gow with little eyes. The Pacman sweet potato is nestled on a pile of sweet potato mash and zucchini. While the deep fried Pacman is a little hard and chewy on the inside as opposed to fluffy and sweet, the mash underneath goes down a treat. 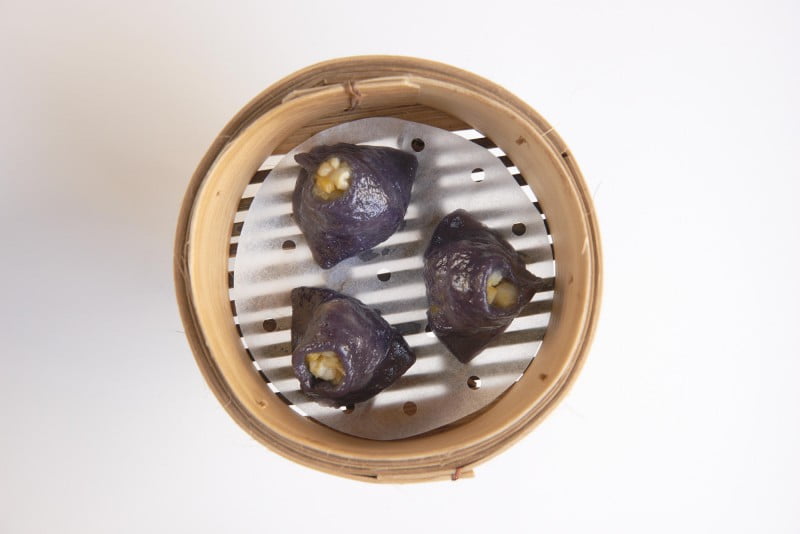 Throughout the night a yum cha cart will roll around, laden with endless kinds of dumplings. While some may already be favourites, others are a little imaginative. Like the Leatherjacket Dumplings ($12). These cute little morsels are dyed a purple black using squid ink and are filled with leather jacket fish and curried pumpkin. The flavour is unusual, not like anything you’ll see at Marigold. But the fish and curry flavours gel together perfectly and there is a good hit of spiciness throughout the dumplings.
We also try the Cray Cray dim sum ($12), which are orange coloured bites filled with crayfish and scampi. A seafood lovers dim sum dream. 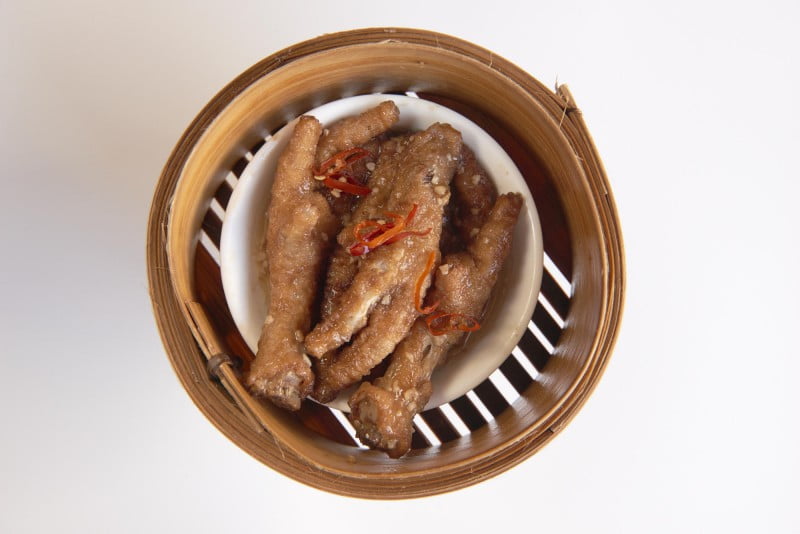 “I’m so happy you decided to try the chicken feet, they’re actually my favourite”, is the remark made by Chu as she passes our table when our chicken feet arrives, My friend seemed shocked at this admission. “How are they her favourite? There isn’t anything on them”.
Chicken feet ($8) are without a doubt one of the more adventurous plates on the Cha Li Boi menu. They are unlike anything we expected them to be. While doused in an almost sweet, delicious marinade, we are confused as to where the meat is. It seems to be simply cartilage and fat. Whilst what is there certainly will melt in your mouth, don’t order if you’re hungry. 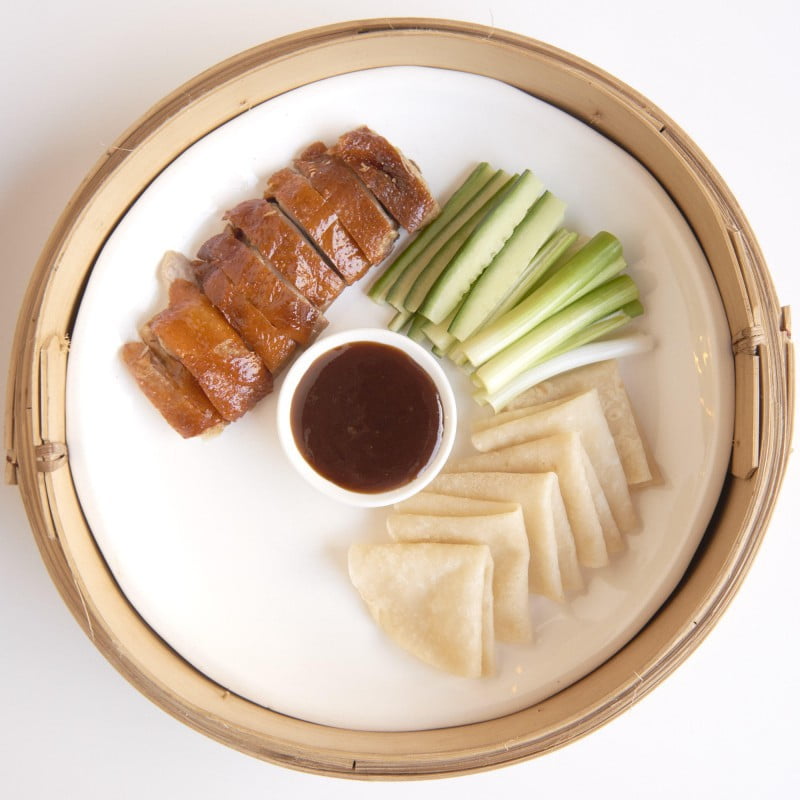 Can you really embark on a Chinese dining experience and not indulge in peking duck? We thought not. Just like any other Peking Duck Pancakes ($19), Cha Li Boi serves up crispy slices of duck alongside cucumber, spring onion, hoisin sauce and, of course, the pancakes. The duck is crispy on the outside, tender on the inside and the rest follows. Ducking delicious. 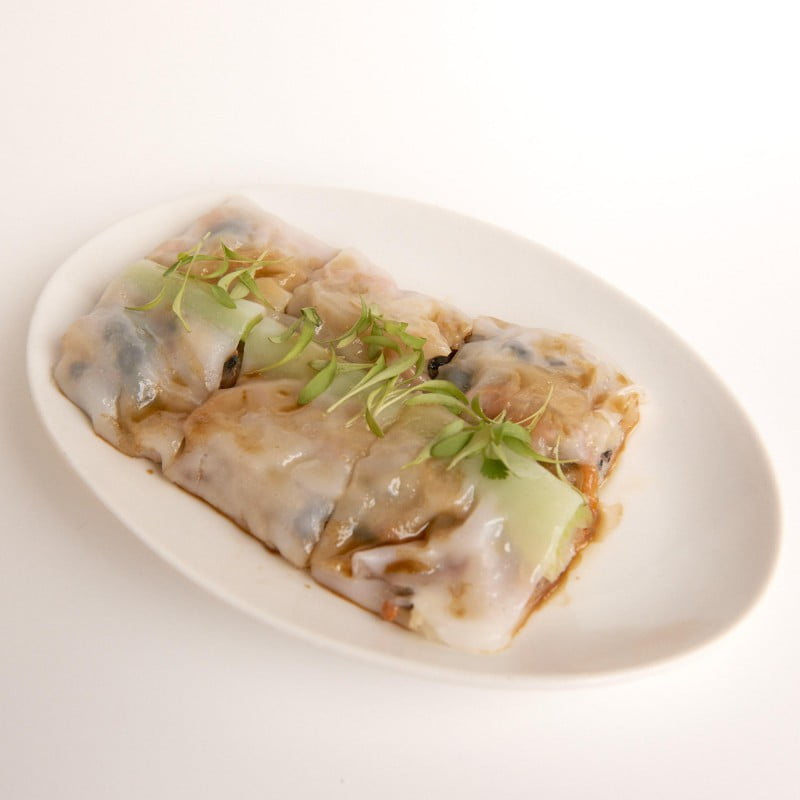 The BBQ Pork Cheung Fun ($9) is a favourite of mine at any other yum cha restaurant so I jumped at the chance to try it at Cha Li Boi. It’s quite the same and equally as delicious. It is packed with plenty of the BBQ pork, doused in a sweet soy based sauce and makes for a couple of scrumptious mouthfuls. 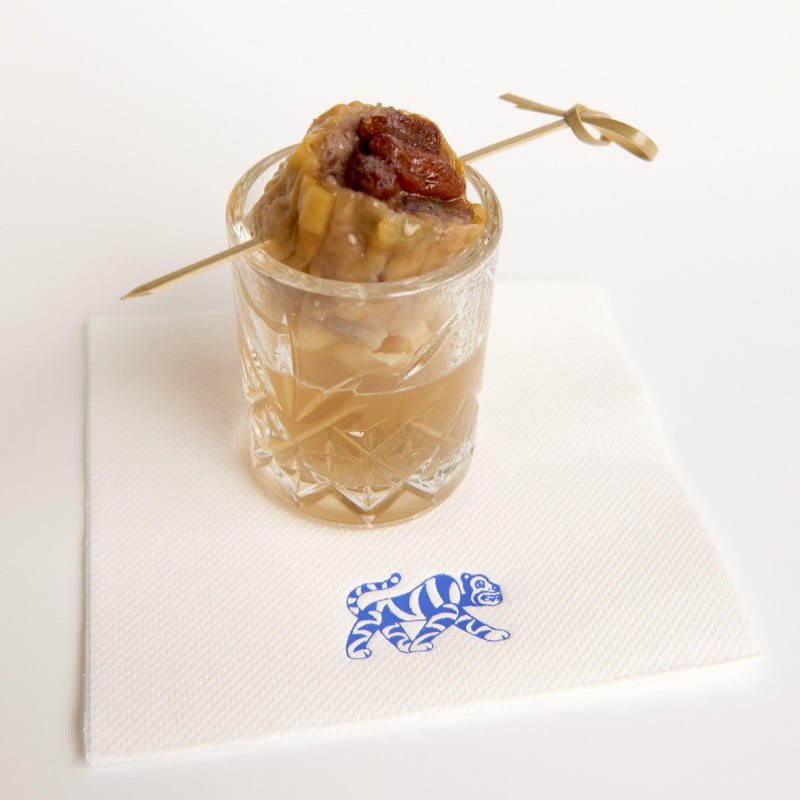 I’ll tell ya, you don’t need the traditional MSG packed and greasy yum cha plates to fill you up. We are bursting at the seams by the end of the evening. And what better way to end dinner than with just one more dumpling. The Shot Wallaby ($7) is a sui mai made with wallaby, saltbush and native greens, resting on a shot of supreme soup. The Aussie dumpling has a really unique, meaty flavour from the wallaby however the broth left a little to be desired. It is a stock that the wallaby is cooked in but tastes quite plain and mild, like water flavoured with cinnamon and some star anise.
As our evening started coming to a close, our lovely waitress asked if we would like any Chinese tea to finish. We had our eye on tea, but not Chinese tea. We couldn’t help but order another round of bubble cocktails, this time going with the Leagues Island Iced Tea ($19). Like any other Long Island Iced Tea it is a strong combination of vodka, rum, tequila and cointreau with an addition of citrus, bar made spiced syrup, all topped with pomegranate cola. The pomegranate adds a tart kick to the cola, evening out its sweetness. A dangerous choice for the last drink of the evening, as it is rather intoxicating but masked by the fantastic spicy flavours. Definitely a better choice for your first drink of the night.
Our eyes far bigger than our stomachs, we couldn’t end the night without tasting at least one of the decadent looking desserts. We land on the Banana Fritters ($16). While it does technically come with house whipped vanilla ice cream, we opt to swap it for coconut ice cream (I suggest you do too). The batter is crispy and not too sweet and the bananas delightfully soft and creamy underneath. 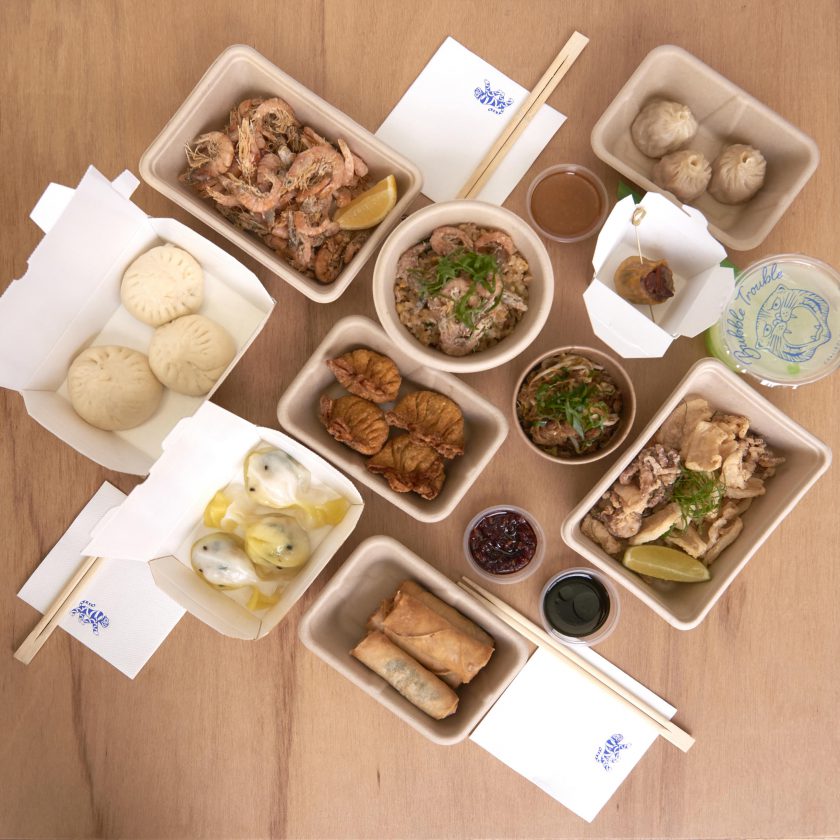 You’re going to want to pop into Cha Li Boi first hand to experience the unconventional setting, the great service and the hospitable atmosphere but if it’s simply the delectable food you’re after, the eatery is all set up on UberEats for your convenience.
Cha Li Boi Yum Cha & Bar
9 Bronte Road Bondi Junction
9369 5391
Mon – Wed 11am-10pm, Thurs – Sat 11am-11pm, Sun 11am – 9pm
https://chaliboi.com.au/