Eat, drink and relax by the shoreline at Bondi Beach Public Bar this summer.

The team behind Icebergs and Dolphin Hotel are bringing a brand new pub to breezy Bondi Beach, Bondi Beach Public Bar (BBPB). After much anticipation, doors are opening today Wednesday 20th December with the public bar open 7 days a week from 11am to 1am.
A sharp, contemporary interior feeds into a distinctly modern feel at BBPB. With that in mind, the team also wants to tap into the energy and attitude of the 1970s and 80s Aussie pub culture. It’s a community-driven, family-friendly place where people can eat, drink and relax by the beach.
“Whenever I am asked what the BBPB will be I reply very simply that it’s a Public Bar. Its not a hotel with a dining room or wine room, its just a basic Public Bar. It takes pride in being a bar that represents Sydney and Bondi Beach today whilst maintaining the simple qualities that a Public Bar should have… community values, good food and a simple cold beer.” – Maurice Terzini 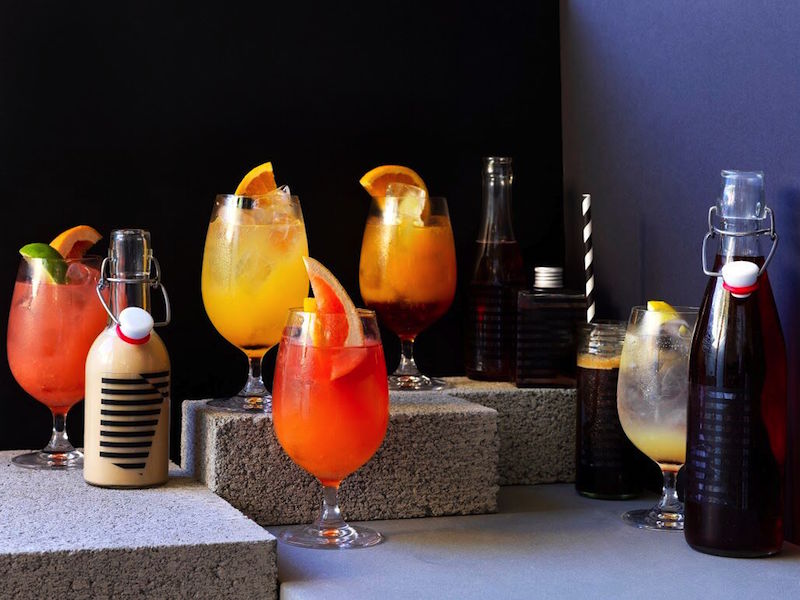 On the drinks list at BBPB you’ll find a concise wine list in line with a minimal intervention philosophy by Wine Director, James Hird. Cocktails will range from the classics including the No. 8 and Negroni to refreshing spritzes and unique concoctions, appeasing an entire spectrum of drinkers.
When it comes to the food, BBPB have stressed that it will be approachable, Italo-Australian Public Bar food.“It’s an ode to traditional public bars, so there are counter meals, it’s an everyday venue. It’s just easy and cheap,” drives home Terzini.
Heroes on the food list will be NY inspired pizzas and the ‘squish’ burger, a rendition of a burger Monty Koludrovic made with Matty Matheson (VICE munchies) for an event last year at the Icebergs, “Bella’s Hot Fried Chicken”.
BBPB’s good friend and artist in residence, Matthew Bax, has created a 23 metre art installation for the space and the mood of the venue is representative of the freedom and spirit of the works by late Australian photographer Rennie Ellis.
Musically, BBPB harks back to glory days of surf rock and blissed out summery rock and roll. It will be heavy on Australian bands from back in the day and re-discovered raucous classics. There will be plenty of playlist collaborations for special events and a continually evolving soundtrack guided by Kali from Picnic, a prominent Sydney DJ and event producer.
To read more and check out the full menu, click here
Bondi Beach Public Bar
203, 180 Campbell Parade, Bondi Beach.