With all this extra time on your hands, why not get properly acquainted with this delicious spirit.

Mother’s Ruin, Cuckold’s Comfort, Dutch Courage. History has certainly given gin some colourful nicknames. The spirit that has been associated with prohibition-era bathtubs, alcoholic writers, and warding off malaria has in recent years been rediscovered, rehabilitated and its good name restored.
With the ability to be made in several different styles as well as flavoured with a myriad of botanicals, it is a wonderfully varied, complex, and flexible spirit. And more than that, it can be paired with a wide range of mixers and ingredients, and infuse the simplest drinks with sophistication. It really is hard not to feel a little debonair or ever-so beguiling with a gin cocktail in hand. So if you’re keen to up your gin game, read on.

This is the ultimate gin guide for beginners 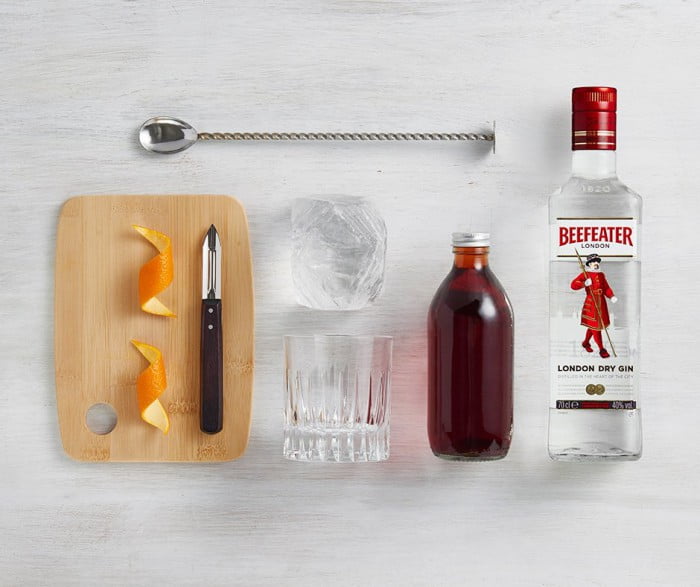 Gin, the ying to tonic’s yang. Everyone knows its delicious, but perhaps not what it is exactly. The word itself comes from the French ‘genièvre’ and Dutch ‘jenever’, both of which mean ‘juniper’.
In its simplest form, gin is a colourless, ‘neutral’ spirit, that can be made from fermented grain or molasses, and flavoured with juniper berries. Apart from that anything goes. And various herbs, fruits and spices, aka botanicals, can be added to the mix to enhance both the flavour and fragrance of the distillation. Hendrick’s much-loved gin range is well recognised for its rose and cucumber flavourings, as is Tanqueray for its use of grapefruit, coriander, angelica root and liquorice, and Beefeater of liquorice and Seville oranges. And while it is typical for a label to use a handful of aromatics, the Botanist Dry Gin has made a name for itself for using 31 botanicals, which include nine classic gin flavourings, including orris root, cassia bark and coriander seeds, as well as 22 local botanicals from the Hebridean island of Islay.

Considered the quintessential British spirit, gin actually originated in Holland where it was developed for its supposed medicinal properties. It was not adopted by the Poms until late-17th century when the Dutch William of Orange ascended the throne. It was at this time that the British government decided to raise taxes on foreign liquors, particularly French brandy, while at the same time, turn a blind eye to unlicensed home gin production. As such, London Town saw an explosion of small-scale gin distilleries, and gin became cheap, easily available and wildly potent. The city soon succumbed to an epidemic of drunkenness. To get the Gin Craze under control, the government sought to raise taxes and impose restrictions on the sale of gin. This led to rioting in the streets, but eventually the ‘Gin Acts’ worked and consumption plummeted.
The 19th century saw the rise of new distillation and production processes, and as such the creation of new styles of gin, including London Dry. It was also during this time that the humble gin and tonic was born. Quinine, a type of bark-extract, was found to prevent and treat malaria. And so despite the bitter taste, British soldiers stationed in India were required to consume it. However, canny officers soon discovered the palatable wonders of adding a little water, sugar, lime and gin to the quinine mix. This lead to the creation of tonic water, effectively quinine-infused carbonated water. And today’s variety still contains quinine albeit a much less quantity. 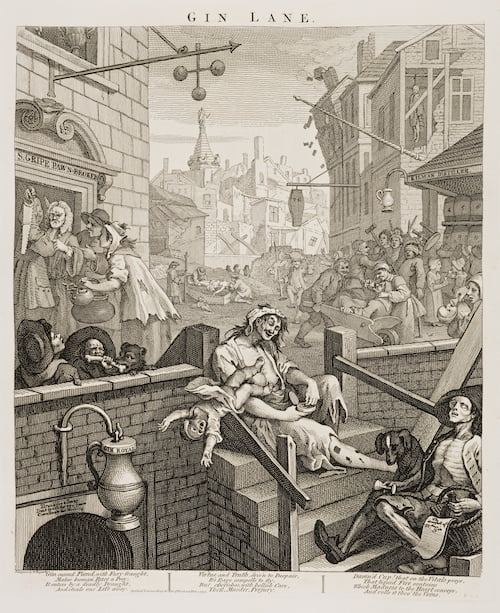 It wouldn’t be until the after World War I that gin returned into hedonistic favour. Tied to notions of glamour, urbanity, and jazz, the spirit flourished. Prohibition era-America struggled to contain production, particularly as it is such an easy spirit to make. Bootleggers only needed raw alcohol, juniper berry extract, and a large container to make gin, hence the rise of ‘bathtub gin’. It is no surprise then that during this time, gin was both low in quality and in taste. And once again human ingenuity shone through. Cocktails rose in popularity as they were able to mask the terrible taste of the spirit.
Prohibition in the United States was eventually repealed in 1933, and around this time, Britain also made changes and policy reforms about the spirit. This allowed legitimate makers and distillers to produce and sell regulated gin, as well as create a better and more nuanced quality of gin. Thus transforming the spirit from effectively backyard hooch into the international, billion dollar business it is today.

Whisky, tequila, and vodka, can all either be sipped or downed in a shot. Gin, on the other hand, is really meant to be enjoyed in a cocktail or mixer, and absolutely never in a shot. Whether paired with a slice of lemon or mixed with dry vermouth, Crème de mûre, or tonic, it works well with so many ingredients.
That said, to truly understand the complexities of the spirit, as well as find your favourite, the best way to compare the different types of gin as well as labels is to try samples at room temperature and cut with an equal measure of water. This will reveal the unique qualities, aromatics and flavours of each particular tipple. Some hard core fans of the spirit even drink their gins, particularly New Wave beverage, neat.

Distillery Botantica is located just outside of Sydney in Erina. Sourcing their botanicals from their own garden, they craft their gin using ‘enfleurage’, a thousand-year-old technique that extracts the purest perfume from signature aromatic, Murraya, without using heat.

The Hunter Valley-based Hunter Distillery produces two types of gin. The herbal and aromatic Copperwave Gin boasts over 11 different botanicals, which are distilled separately in flavour groups before being blended. In comparison, the Jail House Gin is a spicier offering with its emphasis on lemon myrtle and Szechuan pepper.

Red Dirt Distillery may be known for its vodka and range of liqueurs, but it is also making a name for itself regarding their potato and lime spirit-based gins such as their Mountain Mist Gin, Pinot Gin and Snoddy’s Gin,  all diluted with local Dorrigo water.

Known and much loved for its range of craft beer, Newtown brewhouse Young Henry’s has recent branched out into gin. Distilled twice and charged with classic gin aromatics as well as Australian pepperberry, bush tomato as well as cascara and sencha., Young Henrys Noble Cut’s pièce de résistance is its incorporation of hops in the mix. Making it a wonderfully complex nip. 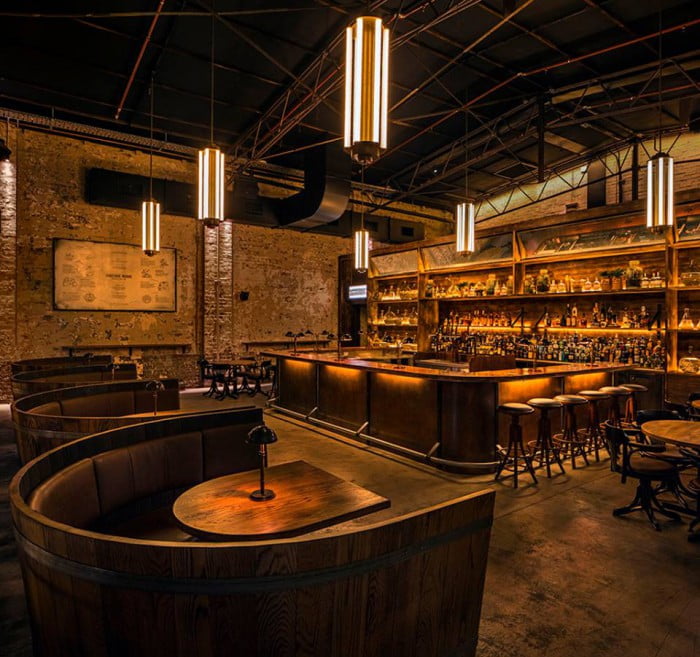 Serving over 75 varieties of hand selected gin, Gin Lane is Chippendale’s answer to the raft of speciality bars that have taken over Sydney. Located on Kensington Street, the intimate bar welcomes the 18th Century into the present day with an inventive drinks list and sleek ambience.

Attached to the Archie Rose Distillery Co is their industrial-chic Bar. Named Best International Bar at the Restaurant & Bar Design Awards, held in London last year, this is a stunning, inimitable venue surrounded by purpose-built copperpot stills and oak casks is the perfect spot in which to enjoy their Signature Dry Gin.

Gin and elegance come together at InterContinental Double Bay’s Stillery Cocktail Bar. Perch at the custom, seven-metre-long marble bar or cosy up in front of the fireplace before taking in the joys of their cocktail and 70-strong gin menu.

Hidden in the heart of the CBD is coiffeur and cocktail-experts The Barber Shop. Exuding old-world charm, there is a wide selection of gin on offer including Plymouth Gin as well as vintage drinks, including Kennaway’s Finest London Dry Gin from the 1950s and Old Mr Boston Deluxe Dry Gin from the 1960s.

One of Sydney’s most loved rooftop bars, The Rook also doubles as a gin lounge. Don’t be put off by the nondescript office-lift entry, what awaits is a reclaimed wood-fairy light oasis complete with a stunning Vexta mural of the bar’s eponymous bird.
So what do you think? Did we miss anything? Any great gin bars we should know about in Sydney?