It’s all about the whisky at Baxter Inn, the new subterranean Sydney CBD bar.

They’ve won countless awards and after almost 2 years running you’ll still find a line of people snaking down the dark lane way behind Oxford St dying to get in to Shady Pines Saloon. A simple concept of whisky and shots in a low lit saloon style bar with stuffed animal heads on every wall and peanut shells littering the raw exposed concrete. Owners Anton Forte and Jason Scott have done it again. This time with The Baxter Inn.
Baxter Inn opened just over a week ago and despite the elusive location and lack of advertising the place is packed on a Tuesday night. Not an easy feat with capacity of 130 people but with close to 300 different whiskeys on offer, a cellar with one of the best Australian wine collections in Sydney and a hot new spot for city dwellers to call home after 5pm it seems word travels fast.
You’ll find Baxter Inn at 154 Clarence Street in the CBD. Walk down the short lane way and turn right where you’ll see a bouncer. Go down some dodgy stairwell and push open a heavy door. Be prepared for a place you might not want to leave. I could imagine doing lock ins here for days!
The bar is named after “Whitey” Bulger a big crime boss from South Boston who spent 16 years on the run under the name John Baxter. He was caught in June of this year and the Baxter Inn is just the sort of place you’d expect a crime lord to be hiding away sipping whiskey, laying low.
It’s former incarnation was a lot less bad ass with Australian fashion label Cue using the underground space as their storage room. Observe the giant stock elevator once used for ladies garments, soon to be stashed with booze swilling Sydney-siders next time there’s a raid. 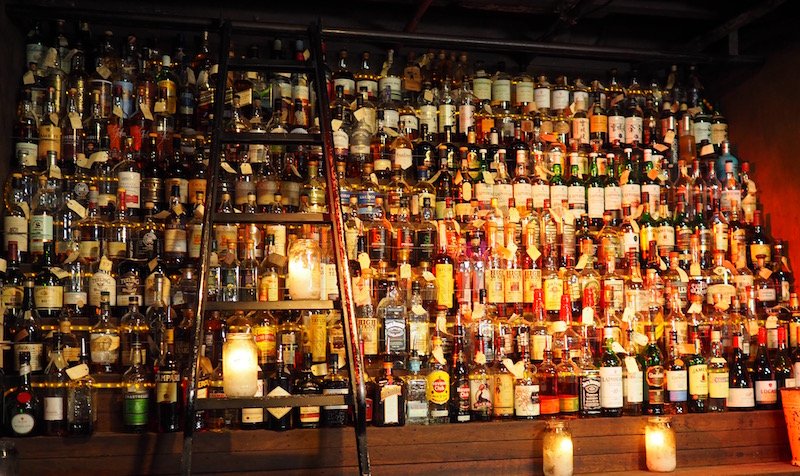 There’s no food, just pretzels on the bar but they’re soon to offer ploughman platters and cheese boards. The staff are attentive and friendly and will take the time talk you through and explain their drinks list even with a full bar. Speaking of the bar-check out the amazing custom made American oak… I try the Hibiki 12 a Japanese Whiskey straight up, it’s smooth I could sit on these all night, and day and the night after. I don’t ever want to leave.
I’ve found my new favourite bar in Sydney town-see you there.
Baxter Inn
154 Clarence St, Sydney CBD
Mon-Sat | 4pm-1am (in 6 months they should be opened until 3am)
thebaxterinn.com