From homemade meze plates to chargrilled meats, experience the best of Middle Eastern cuisine at Above Par.

This isn’t the first Middle Eastern eatery to open its doors in 2020. In fact, we’ve seen a trend emerging among Sydney’s dining scene, with the likes of Merivale’s new CBD joint Jimmy’s Falafel and the charcoal chicken spot Henrietta’s now open in the heart of Surry Hills. And in a similar vein, the CBD has welcomed the opening of an exciting new all-day eatery that you’ll want to add to your list: Above Par.

Like so many venues in 2020, Above Par was set to open its doors for dine-in in late March (but the nation-wide shutdown forced the team to pivot). So, co-owners Efe Topuzlu and Ozgur Sefkatli took this challenging in their stride, transforming this 60-seat Middle Eastern eatery into a takeaway-only business within a matter of days.

The past few months have seen this spot evolve from a takeaway-only eats to a day-to-night dining destination. But what has remained unchanged is Above Par’s authentic street-style feasting plates, taking inspiration from traditional Turkish home-style cooking with Levantine influences.

Above Par is the brainchild of Turkish-natives Topuzlu and Sefkatli who both grew up in Istanbul and met in Sydney. Wanting to bring affordable Middle Eastern eats to the heart of the Sydney’s CBD, this proves the pair’s first joint restaurant venture (bringing together their extensive experience across venues such as The Factory Grind, Four Seasons, Hyatt and Marriott across Sydney). 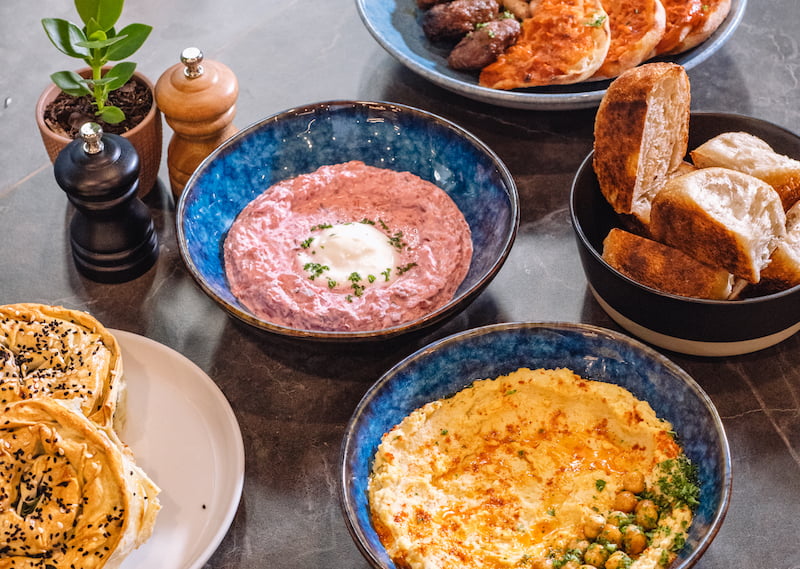 Open six days a week, the dishes at Above Par are designed to share (including homemade Meze plates and dips, chargrilled meats and freshly baked Levant-style bread and pastries). At breakfast expect a selection of traditional Turkish egg dishes, including Cilbir (poached), Menemen (scrambled) and Shakshuka (baked) alongside a cup of Turkish coffee. From lunch to dinner you’ll find a selection of share plates including flame lamb kofte, gozleme, Ali Nazik Kebab (sautéed beef on eggplant puree with simit croutons) and so much more.

Rubbing shoulders with top CBD spots such as the Baxter Inn, Barber Shop, The Lobo and Cantina Ok!, Above par is set to fill the gap for a casual all-day eatery in this corner of the CBD.