The grand dame of St Kilda’s pub scene, the Village Belle Hotel, is the belle of the ball once more after extensive renovations.

For almost 125 years, the Village Belle Hotel has kept a watchful gaze over St Kilda from its Barkly Street location. The suburb itself has grown up around the pub, evolving from a worker’s settlement, to a 1920s bohemian enclave, to a refuge of boarding houses for wayfarers and wanderers, a red light district, and to today’s seaside playground and cafe culture hot spot. As St Kilda has changed, the Village Belle has remained as a constant, familiar presence.
While the pub as we know it today predates the historic Luna Park by over twenty years, the original pub – a wood and iron affair – was first constructed on the site in 1855, and marked the depot for St Kilda’s first trams, Gunn’s Railway Cars. The junction of Acland Street and Barkly Street is still the end of the line for the 96 tram, though the view of the Village Belle Hotel of today is a little different. The current hotel was built in 1891, and was a favourite haunt of Melbourne’s artists and identities, with local artist Albert Tucker and gangster Squizzy Taylor both wetting their whistles at the historic pub.
After an extensive renovation and revamp, the Village Belle Hotel relaunched in December, unveiling a sleek new look that brings a contemporary vibe to the hotel, while honouring its history. 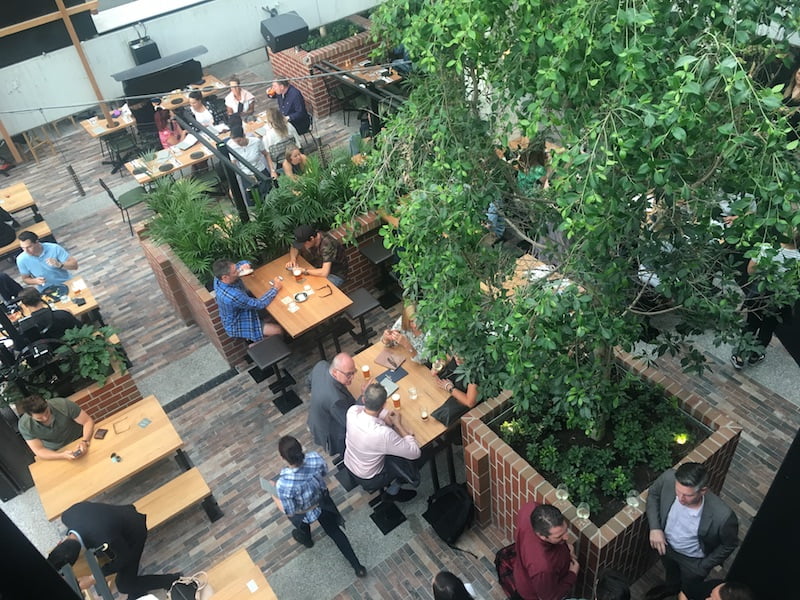 As a long time St Kilda resident, the Village Belle has been like a second home to me since I got my first KeyPass ID. I’ve laughed there, cried there (it was the gin, I swear!), farewelled friends and made new friends there and had awkward first dates there. The hotel has been the backdrop to so many periods in my life that I admit to a little trepidation when the news of a revamp first emerged. But I needn’t have worried, the heart of the Village Belle remains alive and well in the new look hotel.
With four distinct bar areas spread across the expansive double-storey space, the Belle is the perfect place for a fancy function or a lazy Sunday session. The heritage-protected facade remains (with a fresh and fashionable coat of paint, of course), while the former bottle shop area of the hotel has been transformed into a glass and concrete conservatory-style year-round beer garden. Protected by a retractable roof, the Garden Bar will make the most of the summer sun while also protecting from the wintery weather later in the year, and the adjacent Balcony bar is ideal for a spot of people watching.
The Public Bar, located on the ground floor of the original building, maintains the casual pub charm that has made the Village Belle a favourite local watering hole with a well stocked bar, casual seating, and a hubbub that captures the rawness of the St Kilda pub scene, while the Doulton Lounge upstairs (formerly the Dalton Bar) has been converted into a lush, luxe bar that brings the chill.
The menu has been given a facelift as well, with head chef Mathew Macartney – formerly of the uber luxe Lake House in Daylesford – serving up pub classics like pizzas, chicken parma, and fish and chips as well as some fancy delights like Steak Tartare en Croute, and freshly shucked oysters for when you’re feeling a little extra.